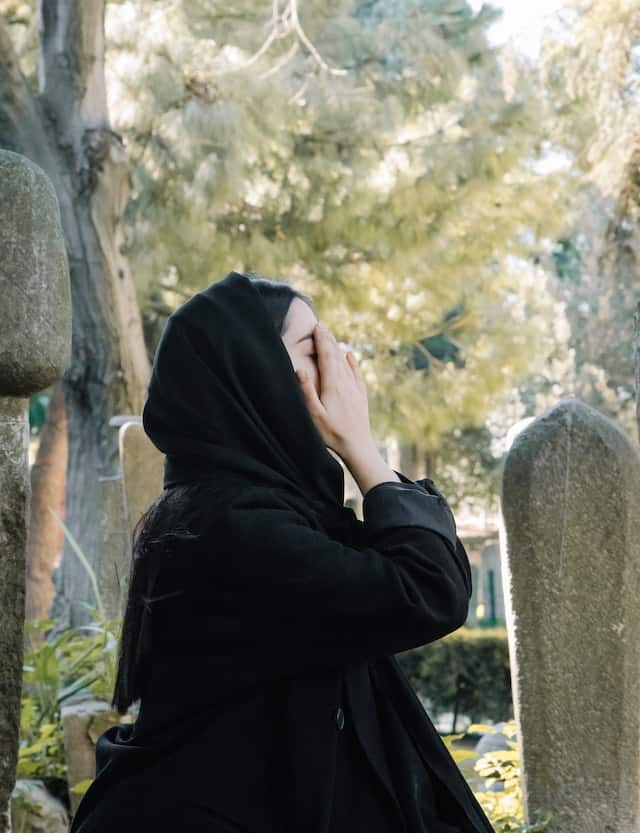 Is it wrong to cry for the deceased?

‘Indeed the deceased is punished for the crying of his relatives over him.’ [Bukhari]

What does this hadith mean? What type of crying is being prohibited here?

There is a misconception that crying for the deceased causes them pain due to the misunderstanding of this hadith. This hadith is explained by another hadith in which the Prophet (peace be upon him) explained that crying (buka) is not prohibited but wailing (niha) is:

Ibn Umar narrated from his father (may Allah Most High be pleased with them both) that the Prophet ﷺ said:

‘The deceased is punished in his grave due to people wailing over him.’ (Bukhari)

This is referring to excessive grief at someone’s death, which was the case in those times, when people would even hire mourners to show an outpouring of grief, wail and scream to make the funeral emotional, this was prohibited. It was a Jahiliya practice and people would instruct this intheir wills. This is haram. He was guiding people what they could or couldn’t do from the Jahiliya practices and customs.

There is no prohibition on crying for the deceased, if one’s tears are falling out of sadness, without wailing or screaming, there is no punishment for this. We can see this from the Sunnah of Prophet (peace be upon him) in his life.

The Prophet’s tears (peace be upon him)

As we saw from the reaction of the Prophet (peace be upon him) whose tears rolled down his cheeks when he lost his baby son, Ibrahim, as narrated by his Anas ibn Malik (may Allah be pleased with him) who said:

The Prophet (peace be upon him) said, ‘O Ibn ‘Awf, it is mercy.’ Then more tears followed and he said, ‘The eye weeps and the heart grieves and we say nothing except what pleases our Rabb. O Ibrahim, we are grieved at your departure.” [Bukhari and Muslim]

Crying over a deceased is allowed. It is natural and it releases emotions which is healthy. There were numerous instances when the Prophet (peace be upon) himself cried over a deceased or someone who was dying.

However if someone is unable to come to terms with the loss of a loved one, they should seek help to enable them to process their grief.

The Prophet (peace be upon him) was passing a crying woman in a graveyard whose crying was on the border of becoming wailing, so he gently corrected her. Anas bin Malik (may Allah be pleased with him) narrated:

The Prophet (ﷺ) passed by a woman who was weeping beside a grave. He told her to fear Allah and be patient. She said to him, “Go away, for you have not been afflicted with a calamity like mine.” And she did not recognize him. Then she was informed that he was the Prophet (ﷺ) so she went to the house of the Prophet (ﷺ) and there she did not find any guard. Then she said to him, “I did not recognize you.” He said, “Verily, the patience is at the first stroke of a calamity.” [Bukhari]

Umm Salamah narrated that the Messenger of Allah (ﷺ) said:

When a calamity strikes one of you, then let him say:

‘Indeed, to Allah we belong and to Him we shall return. (Inna Lillahi wa inna ilayhi raji’un).

O Allah, I seek reward with You for my affliction, so reward me for it, and replace it for me with something better’

How to react when receiving bad news

Allah has taught us in the Quran how to react when any adversity strikes in Surat al-Baqarah:

“And We will surely test you with something of fear and hunger and a loss of wealth and lives and fruits, but give good tidings to the patient, who, when disaster strikes them, say, “Inna Lillahi wa inna ilayhi raji’un”.

Those are the ones upon whom are blessings from their Lord and mercy. And it is those who are the [rightly] guided.” [2:155-157]

Therefore if we receive bad news, we need to train ourselves to say  would Inna Lillahi wa inna ilayhi raji’un. Not with complaining tone. Rather, say ‘Ya Allah I don’t know what is behind this, but I know it is from you.’ And ask Him to help you through it.

The reward for showing endurance

Feeling sad does not mean rejecting or complaining about Allah’s destiny. Feeling sad is absolutely normal, rather it would be unnatural not to be sad.

Abu Umama (may Allah be pleased with him) reported the Prophet (peace be upon him) as saying that Allah Almighty stated:

“Son of Adam, if you show endurance and seek your reward from me in the first affliction, I shall be pleased with no lesser reward than paradise for you.” [Ibn Majah]

Can you hold a khatm?

Duas for a good death