How do I perform Sujud Tilawah? 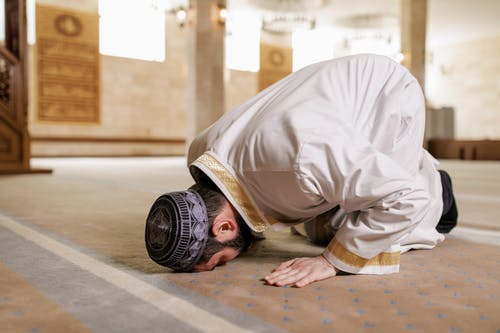 What is sajda tilawah?

Sujud Tilawah is a single prostration which one makes after reciting certain ayahs of the Quran. These are marked with an arrow in the Quran.

The Prophet (peace be on him) used to make this sujud whenever he recited one of these ayahs. He said:

“When a person prostrates himself after reading a verse requiring the performance of sajdah, the shaitan starts crying and wailing in a corner, saying: ‘Alas! The children of Adam were enjoined to perform sajdah and they carried it out, and become entitled to enter Paradise, but I refused to do so and was condemned to Hell.'” (Muslim and Ibn Majah)

In the Maliki school there are 11 ayahs of Sujud Tilawh. In the other three schools, there are 14-15. There is a difference of opinion about the ayah in Surat Hajj.

Is it an obligation or a sunnah?

In the Hanafi school, sujud tilawah is wajib (obligatory). It is considered a debt which must be paid. It can be performed later, but it is regarded as a debt until then.

In the Shafi school, the sujud is considered a sunnah. Therefore you would be rewarded if you did it, but there is no sin if you did not do it.

According to the Maliki school, the prostration of recitation (sujud tilawa) is considered a sunnah, not obligatory, if one is praying a recommended (nafil) prayer. It is disliked (makruh) to recite a verse of prostration during an obligatory prayer.

How do you perform sujud tilawah?

The method is to stand up with the intention, face Qiblah, without raising your hands, say Allahu Akbar and go into sajdah, then recite Subhaana Rabbi’al A’laa’ (at least) 3 times while in sajdah and then rise saying Allahu Akbar. There is no need to do the salam afterwards.

What duas can you recite in sajda tilawah?

In addition to reciting Subhaana Rabbi’al A’laa’ it is more rewarding to recite other duas:

You may recite other duas conveyed from the Prophet (peace be upon him), such as:

My face fell prostrate before He who created it and brought forth its faculties of hearing and seeing by His might and power.

Do you require wudu?

In the four Sunni schools, you do. According to one Hanbali opinion you do not. If a woman recites the Quran while on her period, she cannot make the sujud until she has finished her period and done her ghusl.

Do you need to be covered?

Yes. As you would in salah.

Do you need to do taslim afterwards?

No. You do not need to say ‘salam’ afterwards.

Do you have to perform it immediately?

Can you make up missed sujud tilawah?

Yes, you can make it up in the Hanafi school. If you have missed a large number of of sujud tilawah you could perform anytime.

Can it be performed outside salah?

Yes. As along as you face the qibla and have wudu’ and are covered.

How do you perform it in salah?

If an ayah of sujud tilawah is read in salah then the sajdah must be made immediately in the salah. The method of performing sujud tilawah in salah is to complete the ayat and then immediately go down into sajdah whilst saying Allahu Akbar. After the sajdah return to the standing position whilst saying Allahu Akbar and continue reciting without first reading ‘Bismillah’.

When you recite an ayat tilawah during salah then you should make prostration immediately, whereas if you recite such a verse outside the salah, you may perform it later.

During salah, you may recite a few more ayahs before you do the prostration. For instance, in a surah like Surah Inshiqaq, there are only three verses left to the end, if one completes the surah and then does ruku for the recitation, this is valid only in the Hanafi school as it is still considered as having done sujud immediately after the recitation.

When you rise from the sujud tilawah can you go straight into ruku?

It is preferable to recite some verses when you re-stand, either by completing the surah, or reciting the beginning of another surah. As going from the standing, to prostration, to standing, and then immediately to Ruku’ would be disliked, as it resembles mixing up the order of the prayer by prostrating immediately after bowing, yet doing so would not invalidate the prayer.

Can you perform it seated?

You may also peform Sujud tilawah seated if necessary, however standing is most preferred.

Can you do multiple sujud?

After your first sajda you may remain seated and do as many additional sujud as you want, without having to re-stand.

Do you need to do sujud tilawah if you hear the ayah tilawah in a recording?

No. The condition of the prostration is only necessary if it is a live recitation. You are not required to do the sajda if you hear a recording, as per the opinion of scholars. This is due to the analogy that the sajda is not required when the recitation is by a parrot or from an echo.

Who is not required to perform sujud tilawah?

Anyone who is asleep, insane, or a child and women who are menstruating are not required to perform the sajda. Women can make it up later once they are in a state of purity again.

How many prostrations must you make if you recite a verse repeatedly in one session?

According to the Hanafi school, as long as one recites within a single session (majlis), one only has to perform a single prostration (sajda) at the end.

If one recites the verse (ayat) multiple times in one sitting, it would be sufficient to perform a single prostration.

What times should you avoid performing sujud tilawah?

You should avoid performing the sajda at the times when it is disliked to pray, namely, at sunrise, Istiwaa before Zuhr few minutes and sunset.

Why do we prostrate when we hear these ayahs?

Every verse of tilawah contains a command to do sajda and mentions the severe punishment of those who refuse to. Therefore, believers rush to fulfil this command and to show their obedience and submission to Allah.

Indeed, those who are near your Lord are not prevented by arrogance from His worship, and they glorify Him, and to Him they prostrate.

And to Allah prostrates whoever is within the heavens and the earth, willingly or by compulsion, and as do their shadows in the morning and the evening.

They fear their Lord above them, and they do what they are commanded.

And they fall down upon their faces weeping, and it [the Quran] increases them in humility.

Do you not see that to Allah prostrates whoever is in the heavens and whoever is on the earth and the sun, the moon, the stars, the mountains, the trees, the living creatures and many human beings? But upon many the punishment has been justified. And he whom Allah humiliates – for him there is no bestower of honor. Indeed, Allah does what He wills.

Allah – there is no god except Him, the Lord of the Mighty Throne.

The only people who believe in Our messages are those who, when they are reminded of them, fall down in prostration, and glorify the praises of their lord, and they are not arrogant.

But if the disbelievers are too arrogant, those who are near your Lord glorify Him night and day. And  never grow weary.

So prostrate to Allah and worship [Him].

And when the Qur’an is recited to them, they do not prostrate themselves [to Allah ]?

No! Do not obey him. But prostrate and draw near [to Allah ].

O you who believe! Bow down, prostrate yourselves, worship your Lord, and do good so that you may succeed.

What can you recite in sujud?

How do you perform sajda sahw?