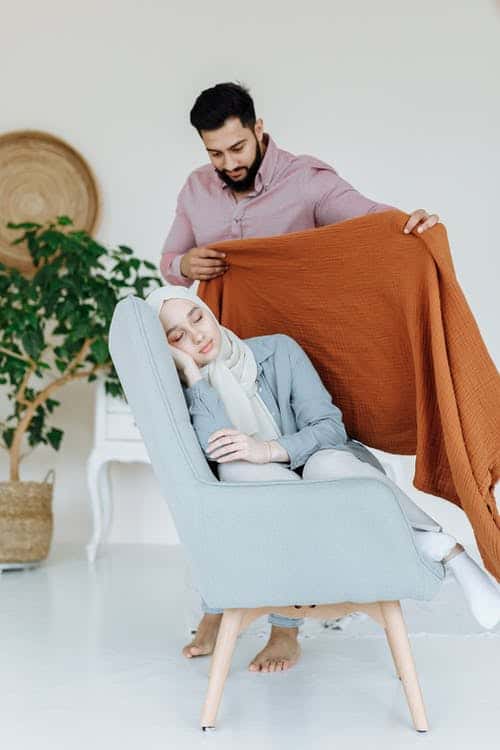 In Imam Ghazali’s Kitaab Al-Arba’in Fi Usul ad-Din, The Forty Principles of the Religion, he explores how to deal with different people. In this section we will look at how to treat relatives.

‘Abdu’r-Rahman ibn ‘Awf heard the Messenger of Allah (peace be on him) said:

“Allah, the Almighty and Exalted, said, ‘I am the Merciful (ar-Rahman). I have created ties of kinship and derives a name for it from My Name. If anyone maintains ties of kinship, I maintain connection with him, and I shall cut off anyone who cuts them off.'” (Adab al Mufrad)

In general we have to be good to our families and prioritise and focus on our close family before extended family.

What about difficult relatives? We all have these, but they are your rahim (connected to you by blood) so you have to behave well towards them. We are given huge encouragement to be good to relatives as it carries enormous reward.

The reward for being good to family

The incentives for being good to family are huge. One of the rewards for maintaining good relations (silaturahim) with relatives is that you are granted more rizq and a longer life span.

Abu Hurayrah (may Allah be pleased with him) narrated from the Prophet (peace be upon him):

He who wishes to have his earnings grow and his term of life or his lifespan is prolonged; he should keep ties with his kin. (Bukhari)

How is it that your destiny, written at birth can change by this? Abdullah bin Mus’ud narrated that Allah’s Messenger (peace be on him) said:

The answer is that your destiny is written at birth and Allah, and has been recorded the Preserved table (Al-lawh al-mahfoudh). This does not change. However in the Book of the Angels which is given to them periodically, it can be changed. Therefore if someone had a lifespan of 60 but then began to maintain better relations with his family, Allah will command the angels to extend his life span.

The punishment for not being good to your family

Tabarani, Bukhari and Muslim have mentioned that the fragrance of Jannah can be smelt 500 years before you reach it, but the one who disconnects his relatives and is bad to his parents will not smell this fragrance. In Bukhari it says they will not admitted to Jannah if they do not maintain good relationships with their family.

The reason for this is because the family is the building block of society. This is why Allah commanded us to be good and this goodness begins at home:

“You are the best nation raised up for mankind. You enjoin what is right and forbid what is wrong and you believe in Allah. If only the People of the Scripture had believed, it would have been better for them [though] among them are believers, but most of them are disobedient.” (3:10)

The ripple effect of goodness starts with the nuclear family and then spreads outwards to relatives and even those relatives who are not good to you.

Unfortunately we tend to inherit broken relationships from our parents. For instance, if your father has issues with your uncle, you will be less likely to talk to him and his family. Thus generations become disconnected, because of sometimes quite petty reasons or the whisperings of shaytan who exacerbates hurt, makes you think ill of others and situations.

The bottom line is that you are always being reminded to be good. The list has priorities number your parents, your family, your relatives, wife and children, cousins and uncles you have to be good to them even if they are not good to you.

This is where the challenge is. Jannah is not free of charge. Do not be vulnerable to abuse. Do the best to maintain a good relationship with your family, without allowing yourself to be placed under hardship or opening yourself to abuse.

Abu Hurairah (may Allah be pleased with him) reported:
A man said to Messenger of Allah (peace be on him): “I have relatives with whom I try to keep the ties of relationship but they sever relations with me; and whom I treat kindly but they treat me badly, I am gentle with them but they are rough to me.” He (peace be on him) replied, “If you are as you say, it is as if you are feeding them hot ashes, and you will be with a supporter against them from Allah as long as you continue to do so”. (Muslim)

Feeding them hot ashes is a metaphor, meaning that because of your goodness towards them and their evil towards you, they will feel shy and pain as the pain of someone eating hot ashes.

Be good to parents

Among the narrations Imam al Ghazali talks about the importance of being good to parents. Abdullah ibn Amr reported:

The well narration that paradise lies under the feet of mothers is a weak narration but its meaning is fine as it is in line with Wa bil walidayni ihsana:

“And your Lord has decreed that you not worship except Him, and to parents, good treatment. Wheter one or both of them reach old age (while) with you, say not to them (so much as), “uff”, and do not repel them but speak to them a noble world.” (17:23)

Be good to your wife

“The best of you are the best to their families, and I am the best to my family.” (Tirmidhi)

He would laugh and smile and entertain his wives. The Hadith Umm Zar’ is the long story the Prophet (peace be on him) told his wife Aisha and it is classified by the scholars of hadith as entertaining your wife or husband.

One of the Islamic principles of justice and good parenting is to fear Allah and give your children equal gifts in your lifetime. In your lifetime do not give your boys double what you give your girls. This is only the case after your death.

In exceptional scenarios where one child needs more support, then you can give them extra, but in general and in normal circumstances, your gifts to your children should be equal.

If a child helps his father run his business, does his involvement in the business mean he can take more than his brothers and sisters? Yes, as he is growing the business for them. He should have extra as he is not a sleeping partner. He put his expertise, blood and sweat into it, so they are not equal.

Be good to your servants

If they made mistakes then be good to them. If you are nasty to them, they will be bad to you and your business will suffer. Therefore be good to your employees for the sake of your dunya and akhirah.

Some companies give their employees a share in the company to encourage them and motivate them, while other companies squeeze every bit out of their employees, so they cannot wait till they leave. This is not the right way to treat them. When you treat people well it will benefit you in dunya and akhirah.

May Allah makes us from those who are good to their family and relatives and employees and please Him. Ameen.