Do not mistake staying in a bad marriage for sabr. It is weakness.

Marriage is not a life sentence. 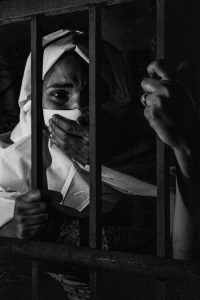 Islam is not an alien religion which puts women under threat or expects them to tolerate abuse or harm. Any abuse is haram. I am not in any way promoting or encouraging divorce, or the break up of families and upheaval of children, but if a marriage is abusive or oppressive, there is no imperative that a woman must stay in that relationship.

Clearly, we should encourage reconciliation and counselling, and talaq is the only ever last resort, but there is a big difference between a couple making mutual sacrifices and one person annihilating them self in a marriage or any relationship. Mutual sacrifices and compromises create a good relationship, however, if they are entirely one sided they are unjust.

Marriage is not supposed to be life-sentence of suffering, pain under the mistaken impression it is rewarded. This is the wrong definition of marriage.

I am addressing this issue because in some communities, from a cultural point of view talaq is viewed as haram and is a big taboo, yet Allah Almighty permitted talaq as an option when all else has failed. The Prophet (peace be on him) said:

The most hated of permissible things to Allah is divorce. (Ibn Majah)

All marriages experience difficulties, challenges and sacrifices but sometimes when people realise that they can’t tolerate being married anymore their families pressurise them into staying together when divorce would be the more humane option.

Allah Almighty created mankind to have dignity and respect, not to be degraded in any situation including marriage.

There are many women who have been stuck in humiliating marriages to preserve the honour of their family. And this does not just affect women, as there are men who are suffocated in bad marriages too.

No one should suffer because their family want to maintain a façade in the community that they are OK.

Her action is not classified as patience as it is harming the family. She is punishable if her patience is creating more problems. This is not sabr, this is weakness. There is a thin line, which we tend not to see, between sabr and weakness. The greater benefit lies is outside such a marriage, where she would gain safety, sanity and tranquillity, which is a healthier environment.

When the angels take away from their bodies the souls of those who have wronged themselves, they will ask them, ‘How did you live?’ They will reply, ‘We lived on earth in weakness and oppression.’ The angels will say, ‘Was not God’s land vast enough for you to go wherever you could live in peace?’ The dwelling of these people will be hell fire, a terrible destination. (4:97)

Some women are so scared what people will think or the social repercussions on their family that they remain in toxic marriages, to the detriment of their mental and emotional health, and that of their children. Even when they have all the right reasons for leaving, they feel consumed by guilt, anxiety and fear of what others will think. In such a case, it is an obligation for them to leave, as remaining in the marriage is harming their well-being.

Yet having been in such marriages for years, the women are sadly unable to see clearly that they have been brainwashed by their culture to remain. They lack the confidence to change their reality. If you are a weak person, then ask for help.

Why would you expose your children daily to shouting, swearing and screaming? It is psychologically damaging for them. They will hate getting married. Sometimes a woman thinks she is the only one suffering and does not want to walk away from her children, so sacrifices herself, often because this is a behaviour she has inherited this from her mother, who was probably also dying in silence.  It is wrong. Children inherit patterns of behaviours from their parents – whether it is oppressive fathers or self-sacrificing mothers. This is not healthy.

Marriage is not supposed to be painful

It is not destiny to live in hardship. Who said you have to have hardship in your marriage? There will be some difficulties here and there, but it is not meant to be bumpy all the way through. We have been brainwashed that we have to learn how to live with pain in marriage, as if they are twinned.

Of course, we need to learn how to live with our differences and accommodate differences. But no one teaches you this, so when you get married you are thrown in the deep end without knowing how to swim, then you are blamed when you sink.

The common scenario is that many people are familiar with the pain, but then the pain grows into cancer. There shouldn’t be pain in marriage. The Prophet (peace be on him) didn’t say you have to tolerate hardship and you will be rewarded.

When approached by a woman who wanted to leave her husband even though he had good character, the Prophet (peace be on him) asked her to return back the garden her husband had gifted her and told her husband to release her from the relationship even though her husband was heartbroken. Ibn `Abbas narrated:

Sometimes it is not possible to resolve an issue without going to a specialist. It could be a counsellor, Muslim counsellor or a scholar. You need their input otherwise it is not a genuine attempt to resolve the issue. It is just talk without substance.

Sometimes you are confused and cannot see the situation clearly, are you at the end of the road or not? This is why we have istikhara and we do our homework, research the possibilities and see if we can live with the situation anymore and ask people you trust for their guidance. But we need people of experience, not just those we trust. You cannot ask an imam for marital advice if he is a single imam and has no experience in it.

If a couple separate Allah Almighty is reassuring them not to worry about their rizq as ultimately He is the Provider.

But if they separate [by divorce], Allah will enrich each [of them] from His abundance. And ever is Allah Encompassing and Wise. (4:130)

Allah Almighty talked about marriage as a place of sukoon, (tranquillity) but it can become hell. If there is suffering then let the relationship go.

And of His signs is that He created for you mates from among yourselves, so that you may find tranquility in them; and He planted love and compassion between you. In this are signs for people who reflect. (30:21)

The husband might be worrying that his wife will become vulnerable if her divorces her and the family will be broken, or that he still has love for her, but if he is melting like a candle because of what she is doing to him, then he needs to draw a line.

Allah Almighty will facilitate what is sufficient for them. He might replace their spouse with someone better. Trust Allah Almighty. The one who has been wronged in the relationship will be compensated. And the one who is in the wrong will suffer. There are countless examples of this around us.

Allah Almighty tells us not to stay in a marriage because we are concerned we have no one else to provide for us other than your husband. In that case, we are doubting Allah Almighty without saying it. It is not worth staying in marriage because you are being provided for by your husband. Allah is the Provider and will provide you with sustenance. So have full trust in Him. Everything belongs to Him.

We need to create a good environment, equip our children with the right tools, and teach them the symptoms of healthy and unhealthy relationships. If they see the symptoms, they need to seek help.

Divorce of course is not a light matter. And should only be taken when it is the solution, not the creation to a another problem.

And the Prophet (peace be on him) also said:

If any woman asks her husband for divorce without some strong reason, the odour of Paradise will be forbidden to her. (Abu Dawoud)

Whether to divorce or not also depends on how long a couple has been married. If they are just starting out and in their first two or three years, they should work at making their marriage work, without being harmed and with the support of their families.

Marriage is a mutual contract between two people with their consent, to live together and help and support each other to their journey to Allah Almighty and look after their family, give them the right tarbiyya to be among people of Jannah.

Saving a marriage when it’s breaking down

Three ways to fix your connection with Allah

The paradox: you become strong when you admit you are weak