Why Scholars Differ – the Differences between the Schools of Thought

The Differences among the Fuqaha

In particular we are focusing on the scientific differences among the fuqaha (jurists) and why we have more than one opinion. 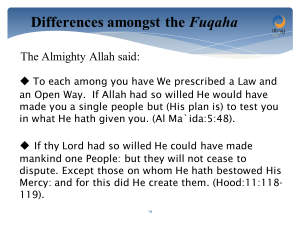 The main difference is linguistic difference. The second one is evidences and the third is in understanding. 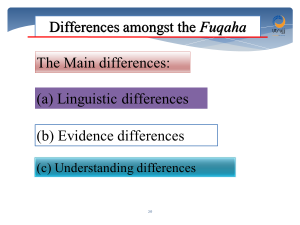 When we look at linguistic differences, it becomes clear quite quickly that the language itself generates multiple understandings, when it is not definitive. The Islamic pillars are definitive as is the ayah, Qul huwa Allahu Ahad, ‘Say there is One God.’ [112:1]. The meaning is unambiguous – it is about the tawheed (oneness) of Allah Almighty. However when we have an ayah such as la mastum un nisa, ‘when you come into contact with women’ [5:6], does it mean physical touching or is it a euphemism for sexual contact?

The truth is that Allah Almighty wanted differences of opinions to arise. He could have, if He wished, made the meanings unequivocally clear. But He deliberately chose a word which carries more than one opinion. Why? To give ease to the ummah.

Omar ibn Abdul Aziz made a beautiful statement that he would dislike the companions to have only one opinion. He was glad they had multiple opinions because this creates ease. Otherwise there would be one inflexible opinion, which you would have to stick to regardless of your circumstances. When we have room for more than one option, it makes life easy.

Who said Ease is Not Permissible in Islam?

One of the characteristics of the shariah is ease.

In the Qur’an Allah Almighty said:

Allah intends for you ease. And does not intend for you hardship. (2:185)

The Prophet (peace be on him) always used to say to his companions, Yasiru wa la tuasiru:

Make things easy for the people, and do not make it difficult for them, (Bukhari)

This is the main theme. Allah Almighty never made hardship for you in His deen. I wonder why some people are pushing the culture of hardship into our faces and into our community? Why? This is not the prophetic understanding or practice. The Prophet (peace be on him) always opted for the culture of ease. 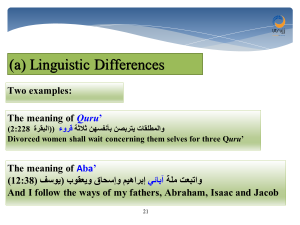 In the Arabic dictionary, ‘Quru’ is a homonym, i.e. it can mean two different things. In  this instance, they are opposites: one is tuhur (purity) and one is hayd (menstruation)? Which one is required here? He left it open.

Allah Almighty  could have said let them wait for three hayd or three tuhur. But He never said which because He wants ease. What are the consequences of difference in meaning? Huge. If a woman’s husband passed away while she was on her period is she entitled to inheritance from him? If we follow one opinion – then yes. If you follow the other, then no. So Allah Almighty gave us room to manoeuvre here.

And I have followed the religion of my fathers, Abraham, Isaac and Jacob… (12:38)

The word aba’i (father) linguistically literally (haqiqa) means your biological father. Here it is not the biological father, it is a metaphorical (majaz) father. In addition, the grandfather can be called the father as well, so the word has more than one meaning. What are the consequences of this? Does the grandfather in the absence of the father inherit or not? So there is room for discussion.

This is a deep detailed topic. The evidence differences there is a whole science. 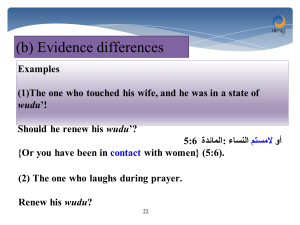 or one of you comes after answering the call of nature, or you have been in contact with women and you find no water, perform tayammum (4:43)

Allah Almighty  is saying ‘if you have been in contact with women’, does it mean literal touching? Or is it a metaphor? There are two interpretations for this. Both schools have evidences. In the Hanafi school, mere touching doesn’t break wudu. And one evidence to support this interpretation is in Bukhari, (narrated by Aisha) when the Prophet (peace be on him) would kiss his wife and then go to pray without renewing wudu. However the Shafi school bring other narrations and maintain that it breaks wudu. For all newly weds, even when they are Shafi, they become Hanafi! This is the culture of ease. We will explore later how to choose a school with the right etiquette.

Ultimately it is a matter of evidence, when the evidence is authentic it is accepted by scholars. It is the scholars- not lay people, who establish rulings.

Methodology of the Different Schools

In general, when you study the four schools, and see the different approaches of the rationalists and the traditionalists, you find the Hanafis on one side and the remainder on the other. Even in usool ul fiqh they have their own schools.

An example of this is whether it is an obligation to recite the Fatihah in salah or not.  There are plenty of narrations. The Prophet (peace be on him) said: 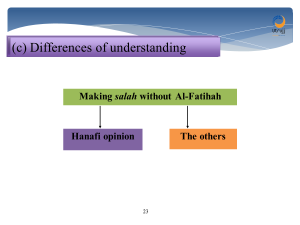 Whoever performs a prayer in which he does not recite Ummul Quran (the Mother of the Qur’an, i.e. Al Fatihah), it is deficient; not complete. (ibn Majah)

Language, evidences and understanding are not the only reasons for differences.

Shafis and Hanbalis and Maliks say that if you were behind an imam but did not recite Al Fatihah in your salah, your salah is not valid. The Hanafi say that you should not recite the Fatihah behind the imam. The difference comes from the different methodology used to deduce rulings.

The Hanafi school consider fard on top, then wajib (close to fard) and then Sunnah. However the other schools refer to only the fard and the Sunnah without the wajib in between. The wajib was invented by the Hanafis. They said it is above the Sunnah but below the fard. Thus the recitation of the Fatihah is not obligatory because we cannot contradict the Qur’an. The Qur’an says:

Therefore this verse is from the highest level of authority (mutawatir) and clear. Therefore this is the obligation and whatever else comes  from the Sunnah cannot override the Qur’an. Therefore the Hanafi says reciting Fatihah is lower than fard, but wajib. In order to combine between the two the Hanafi says the obligation is only to recite Qur’an in your salah. How does this affect us? If you are a new Muslim and you have not learned the Fatihah, can you recite anything from the Qur’an – according to the Hanafis, yes, it will be valid.

This is the technical process of deducing rulings. They have different methodologies. So you cannot end this kind of difference. It is healthy. 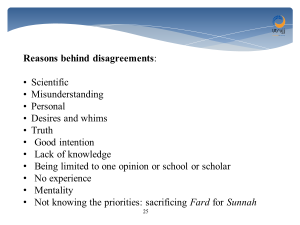 Language, evidences and understanding are not the only reasons for differences in opinions. Differences can also stem from misunderstandings or making a personal choice. There is a difference between public fatwas and personal choices. Sometimes it is desire (hawa) and not evidence. The Qur’an states so many times, do not follow whims and desires, because they take you away from the path of Allah Almighty.

Sometimes we can look at the same thing but our perceptions are completely at variance, as in the story of the blind people who came into contact with an elephant. Some felt the tail and thought it was a rope, while the others felt the side or the tusk. Their understanding and interpretation of what they felt were subjective. They were all right, but they only each had part of the truth.

Being Limited to a School

The less knowledge you have, the more inflexible you tend to be and the more arguments you tend to have. The more knowledge you have the more you realise that there is quite a bit of room to accommodate viewpoints. As we are traditionally expected to practice of Islam through a school, we think that Islam is that school and we have to fight anything outside the school. This is the wrong attitude.

Neither the Hanafi, nor the Shafi, nor any school is Islam. They are from Islam.

No one school can summarise Islam. How do we approach and understand these schools. No experience leads to disagreements.

Some people have a rigid mentality.

Sometimes people become consumed in the details and sacrifice the bigger picture – giving preference to Sunnah over the fard. For instance in the mosque, people see someone praying in a different way from theirs and go to stop them, saying it is bidah. They cause upset and resentment. They have broken the harmony of the community. Correcting someone is Sunnah but not breaking the community is fard. So don’t sacrifice the fard for the sake of the Sunnah. Knowing your priorities will allow you to minimise disagreements but it needs a deeper understanding than surface knowledge.

Why Scholars Differ – Definitions of Shariah and Fiqh

Why Scholars Differ -The Origins of the Fiqhi Schools

Why Scholars Differ -What are Ijtihad and Taqleed?

The Origins of the Four Schools of Thought

Why We Cannot Deny the Sunnah

Grazing around the boundaries of haram. Knowing the halal, haram and doubtful