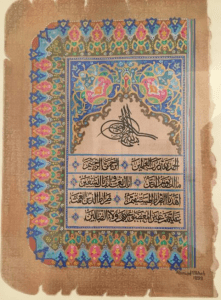 The Essence of the Entire Qur’an 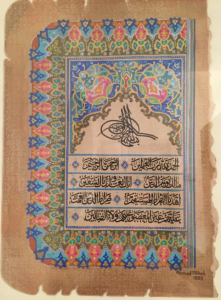 The opening of any book isn’t just an indication of what is to come, but of a superior quality and reflects the energy of its author. So densely packed are these seven short verses, that they are known as Al Wafiyah (The Sufficient). It is as if we were given the entire Qur’an in one hand and Al Fatihah in the other, making it on a par with the entire Qur’an, reflecting its essence, rank and grandeur. Allah Almighty has mentioned: ‘And We have bestowed upon thee the Seven Oft-repeated (verses) and the Grand Qur’an’ (15:87)

Incomparable in its style – a most perfect, concise and eloquent introduction to the Divine Message, reciting it with presence of mind brings tranquillity to the heart.

Opening the first page of the Qur’an, Allah Almighty begins the process of teaching us how to talk to Him. Imam Ahmad (may Allah be pleased with him) counselled: ‘Whoever wishes to have a dialogue with Allah Almighty, let him recite the Qur’an.’

Surah Al Fatihah is a prayer in Allah Almighty’s own words, teaching us how to appeal to Him and giving us the guidance to ask for guidance.

Scholars writing tafseers (critical analysis) of the Qur’an have devoted pages and pages on these seven ayahs including Sheikh Nuruddin Itr (may Allah be pleased with him), for example, who wrote a 400 page commentary on them in his first draft. It is no wonder that we have been commanded to recite Surah Al Fatihah in our salah at least seventeen times a day.

What’s in a name?

In Arabic culture, something important has many names. And Surah Al Fatihah is a great example of this. Imam As Suyuti (may Allah be pleased with him) collected twenty names for this blessed surah, several of which are tawfiqi (from Allah Himself). Each name signifies one of its multiple functions. Referred to as Umm ul Kitab (Mother of the Book) by the Prophet (peace and blessings upon him), as well as Al Asaas (The Essence), it is simultaneously the introduction to and essence of the entire Quran.

Some of its functions and benefits include:

According to the majority of the scholars, Surah Al Fatihah, The Opening, was not the first surah to be revealed – that was the beginning ayahs of Surah Alaq, however, Allah Almighty chose, Surah Al Fatihah as the most perfect beginning to Allah his book. It is narrated that the Prophet (peace and blessings on him) said: ‘By the One in Whose hand is my soul, Allah has not sent down a similar surah to this surah (Al Fatihah), neither in the Torah, nor in the Gospel, nor in the Psalms, nor even in the Quran and it is Umm-ul-Kitab.’