The Main principles of Islam: Justice 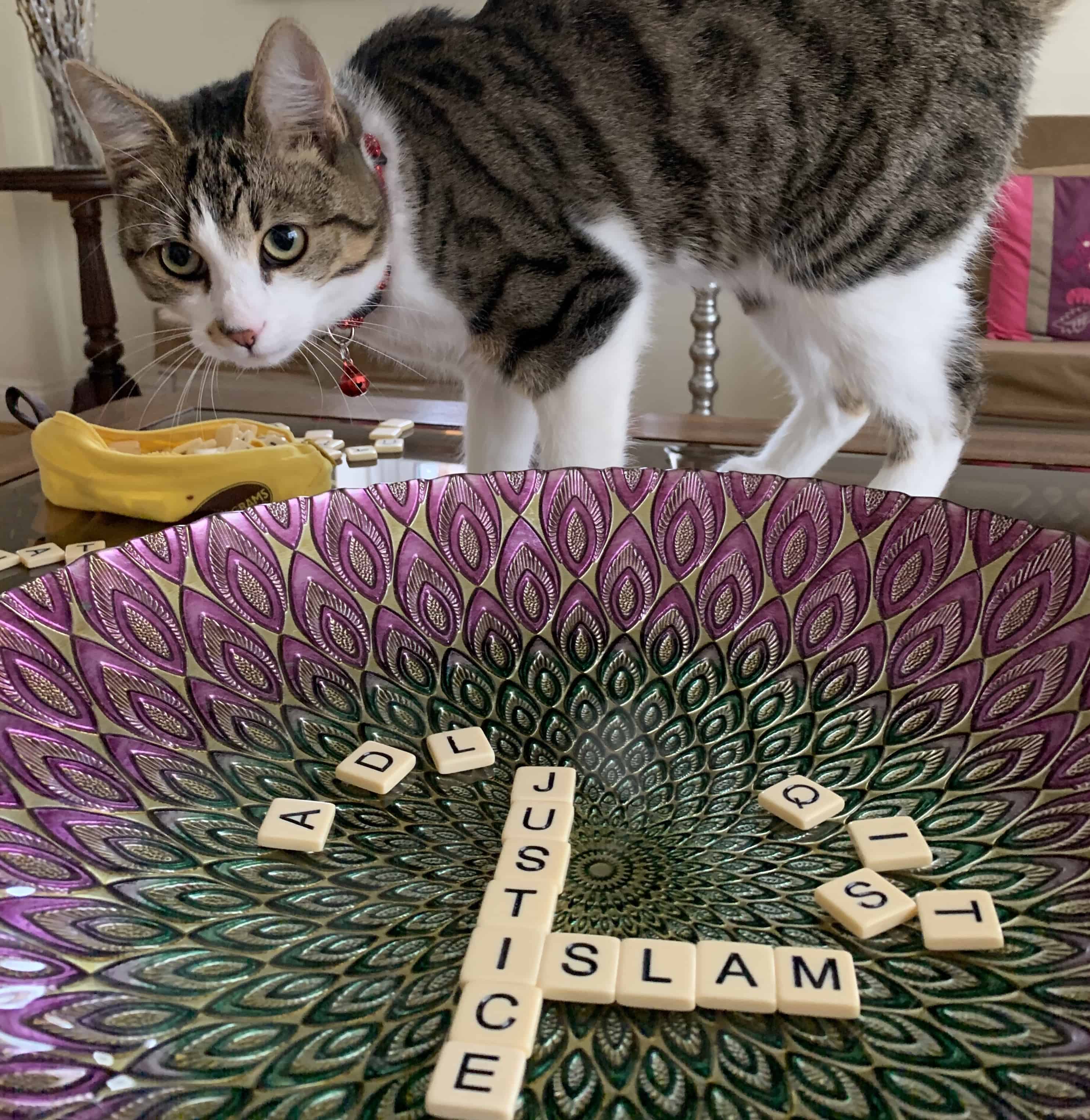 This is the third in the series on General Principles of Islam- which every Muslim should know.

This series started when one of my students in my Arabic class said, ‘You have mentioned the main principles of Islam many times, but what are they? Where can I read about them?’

I realised at that moment that though they are mentioned frequently, and scholars refer to the general principles of Islam as a given, there is no compilation that I am aware of which lists them, so when I reached home I began to jot them down from my mind, from my readings, from my research, and I kept writing until the early morning. I came up with around 70 which I believe roughly summarise the main principles. These are in addition to the 5 pillars of Islam and the 6 articles of imaan (faith), but they are the core concepts and values that we live by, as Muslims.

These main streams permeate whatever we recite or analyse in Islam. So I’d like to share them with our students, and our friends and the community.

In addition to our bondship with Allah Almighty, we have the horizontal dimension, which is our relationship with other people – our dealings with our spouse, parents, family, community and society.

The rules that govern society

Is justice one of the five pillars? No it isn’t, but we do have to know about it and practice it. Is it as important as the five pillars? Yes, it is. This is why we call it a main principle of Islam. It underpins all our dealings.

Much as the media like to portray Islam as a religion of extremism and hatred, the truth is that Islam is the religion of love, mercy and justice, which is ‘adl’.

Al-‘Adl is one of Allah’s names, frequently you come across ‘Al Hakam, Al Adl’, the Judge, the Most Just. The word ‘adl’ itself has been repeated around 28 times in the Quran.

There are various ways of defining adl linguistically, technically or philosophically, but to cut a long story short, the definition of adl is ultimately giving everyone his rights. Whether it’s in the courts or outside, whether it’s dealing with your children, your wife, or your parents, adl means giving someone his right. This is the definition of adl in practice, if you want, not just theory.

The manifestation of adl has to be practical, and it applies to all people, not just Muslims. The moment you take someone’s right, adl is extinguished and oppression is born, which is called dhulm (oppression).

Adl means not depriving someone of his rights

Oh my servants, I’ve made oppression forbidden on myself and I have made it forbidden among you, so do not oppress one another. (Muslim)

This shows that Allah Almighty has forbidden oppression by everyone. It also means that He Himself will never oppress anyone. This is a very important point, as a failure to understand this fundamental fact means that you can question  Allah’s justice when you cannot always see it through your limited perspective.

The repeated endorsement of justice

The word ‘qist’ is also a form of justice in Arabic and al muqsitun are those who are equitable: Allah Almighty says ‘yuhib al muqsiteen’:

Allah loves those who are equitable (5:42)

Every Friday, the khateeb (the one delivers the khutbah) finishes by reciting ‘Inallaha ya’muru bil adl wal ihsan’:

Justice is one of the main principles – we have to stick to it, we have to live it and we have to apply it and maintain it. If we don’t maintain it, it slips from our hands and we lose it.

How we develop the concept of Justice in our life

Check yourself before hand

When we are delivering anything, we need to check if it is in line with justice. Ask yourself, ‘Am I going beyond the limits?

If ‘Yes’, then you need to go back, repent and rectify what you have done if it’s wrong. We are all liable to commit mistakes. But being human is not an excuse to insist on making a mistake. We may not be angels but we need to uphold our values as much as possible. And when we make mistakes, let’s rectify them, lets deliver justice.

Injustice occurs frequently in family relationships, often without realising it. In the incident narrated by An-Nu`man bin Bashir:

In another narration, he (peace be upon him) said, ‘Go to someone else to witness it for you; I cannot witness this’. We see clearly from this example, that it is not justice to give one child more than the others. They lose what is rightfully theirs if a larger share is given to someone else.

Injustice leads us to feel upset, frustrated and angry.

It destroys external and internal peace, and this can be seen as people around the world are demonstrating on the streets to express their dissatisfaction. Whether it is like Lebanon right now, where a revolution is taking place on the streets, because they feel the oppression and injustices affecting them.

Similarly, whenever someone is stripped of their rights, you find them exploding, as we see with the Palestinians, who are suffering from brutal injustice every day.

Oppressors breed oppressors, their children mimic their parents automatically unless they recognise that there is something wrong. And probably we have these experiences throughout our community, our culture, and our history. Injustice is not uncommon at all.

Oppression is a recipe for disaster. No matter how powerful the oppressor, the oppressed will come back to claim their rights.

Allah Almighty has indeed promise to respond to the call of those who are oppressed.

Ibn `Abbas narrated that the Prophet (ﷺ) sent Mu`adh to Yemen and said:

Be afraid, from the supplication of the oppressed as there is no screen between his invocation and Allah. (Bukhari)

Allah Almighty is promising by His Might and Majesty that He will respond to the call of those who are oppressed even if it will takes some way or some time.

In another hadith, Abu Hurairah narrated that the Messenger of Allah (ﷺ) said:

‘There are three whose supplication is not rejected: The fasting person when he breaks his fast, the just leader, and the supplication of the oppressed person; Allah raises it up above the clouds and opens the gates of heaven to it. And the Lord says: ‘By My might, I shall surely aid you, even if it should be after a while.’ (Tirmidhi)

Justice is destroyed by self-interest

Allah Almighty warns us against self-interest in the Quran, as it obstructs justice:

So do not let hatred of some people drive you to deliver injustice. (5:8)

Don’t be controlled by your emotions. Be a person of principles. Deliver justice even if it’s against your own self. This is what justice is about.

We have to be careful not to justify what we like to make it right. This is problematic. This is not justice. Yet, we see some rulers justifying their actions, even when they’re wrong. Just because you are in the driving seat, doesn’t mean you are a good driver. Justice is not about being in the driving seat.

Justice is not about personal gain

When interests contradict justice, people tend to stick to what benefits them at the expense of others. They don’t care! In politics, we see decisions which are for short term electoral votes, rather than in the interests of the public. It’s ‘My party or the highway’. If your party can’t deliver justice to the country, then step aside and let someone else deliver justice and deliver what is right.

Allah Almighty mentions being just in relation to reconcile between two groups who are fighting with each other. Allah Almighty says:

Reconcile between them with fairness and justice (60:8)

As Allah Almighty loves those who deliver justice, if you want Allah’s love, be a person of justice.

Fairness is not taking sides

One of the linguistic definitions of justice is the middle path between two extremes. This means that a person of justice has to be in the middle. Not being on one side or the other. Probably like the scales of justice with the two pans balanced equally, everyone takes his right.

Do not let hatred of some people drive you to deliver injustice.

His actions confirmed this ayah. Some people would say, ‘How come ya Rasulallah, you ruled against us and in favour of non-Muslims?’ They had to be taught that it did not matter who you were, it mattered what was just. Justice was served irrespective of affiliations, tribal ties etc.

How can we be just?

We need to understand that justice means we don’t:

There is a common misconception that you can, when you want to give a gift, give boys twice as much as the girls according to the shariah. No! The shariah mentions twice that the ratio of 2 to 1 is after death, not in your lifetime. This distribution applies to inheritance not to gift. As stated in Sahih Muslim and others, we have to be equal.

Meanwhile, when people say that the shariah is unfair to give men double the inheritance of women, when you look at the different scenarios, there are more than twenty cases where women take more than the man, and in some scenarios, they are eligible when the man isn’t. There are just 5-6 scenarios when men take twice as much as women.

The Prophet (peace be upon him) says:

Fear Allah and be just and fair between your children. (Muslim).