(2:30-33) Lessons in the Art of Communication from the Angels 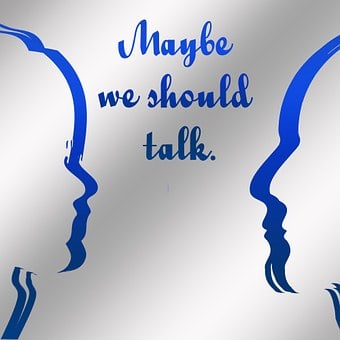 What We Can Learn from Allah’s Conversation with His Angels

Should you speak up if you disagree with your boss? Do you have to listen to those who are under you? And how important is it to be able to have an open discussion?

(Remember) when your Lord said to the angels, ‘I am going to create a deputy on the earth!’

They said, ‘Will You create the one who will spread disorder on the earth and cause bloodshed, while we proclaim Your purity, along with your praise, and sanctify Your name?’

He said, ‘Certainly, I know what you know not.’

And He taught Adam the names, all of them; then presented them before the angels, and said, ‘Tell me their names, if you are right.’

They said, ‘To You belongs all purity! We have no knowledge except what You have given us. Surely, You alone are the All-Knowing, All-Wise.’

He said, ‘O Adam, tell them the names of all these.’

When he told them their names, Allah said, ‘Did I not tell you that I know the secrets of the skies and of the earth, and that I know what you disclose and what you conceal’ (2:30-33)

Allah the Almighty opens a window into the unseen  as He gives us this remarkable glimpse into His discussion with the angels. Though He has no need to discuss His plans with anyone, we see here His willingness to converse with his angels. A dialogue that we would have never known took place, offers us view deep into the history of our creation.

The Angel’s Raise their Concerns

This conversation also shows us the importance of communication as Allah the Almighty discusses the creation of mankind with them. The angels are not robots. Though they have no desires, they do have intellect and they are curious about Allah the Almighty’s plans.

Angels have been given the responsibility to serve humans, and they have been deputised with a multitude of tasks including distributing rain, accompanying those who are engaged in remembering Allah in gatherings and documenting our deeds down to the minutest detail.

They are not to assume power and override the rules of their Lord, or follow their own whims, rather they must fulfil the role delegated to them with sincerity.

Allah the Almighty highlights just the essence of the discussion as it is clear He has told the angels more than this from their comments which show they know that Adam will have blood inside him, unlike angels and jinn. They also know that he will have the potential to spill blood and therefore hurt and kill others. We can see their concern that Adam and his progeny would have the ability to do evil. And that he would be endowed with autonomy, which the angels did not have themselves. That autonomy would mean that they could choose to disobey Allah.

The Importance of Listening

Allah the Almighty replies that their knowledge and understanding is limited so they will not be able to comprehend His wisdom behind bestowing this role upon man. The knowledge of each angel is confined to his own sphere- for example the angel for air, would know about air, but not water. However Adam would have wide ranging knowledge, and the potential to do good.

We have seen repeatedly that Allah the Almighty has been open to discussing any subject, whether it is with the angels, or with man. He often gives us logical reasons for doing what He has told us to, not just commands, as well as proofs of His existence that appeal to our rational nature. From this frankness, we learn from this the importance of opening up discussion with others, rather than blocking out their questions or glossing over their concerns.

A dictatorship culture does not create thinkers.

Effective communication can only come from having the tools to think, the language to articulate ideas. If we don͛t have the words, how can we have thoughts? Allah the Almighty gave Adam the linguistic ability to think, create words and build new languages.

Scholars have created a science from this ayah which appears to talk about the origin of the language, which is called Ilm ul wada. Though we are not entirely sure what Allah the Almighty taught Adam, He certainly imbued Him with the ability to communicate. Along with authority man has been given knowledge. Perhaps He taught him the attributes of things, or rational ability to make connections.

From the angels we are shown that we should speak up when we are concerned. The angels did not object to Adam’s creation, but they were concerned. It is important to understand the dynamics between leaders and their followers. When asked to do something we are uncomfortable with, or if you have concerns we should express them, whether it relates to our parents, friends or boss. It should be done in the most appropriate manner of course, and thus we should be able to raise any queries we have so that issues can be resolved. Staying quiet will not result in any improvement, whereas putting something in the best possible words, could change the whole course of a matter. Finally when the angels were told that they would not be able to comprehend the reasoning behind making man in charge of earth, they confess their limitations and have the humility to acknowledge their inferiority.

We too should not be arrogant to think that we are always right. There may be times when we have to accept that we have not quite grasped a concept and allow room for personal growth. On the other hand, there are times when people in senior positions may need to concede that their junior has a valid objection or even a better understanding or way of expressing an idea than they did. On one occasion, a student gently explained something to his Shaykh a different way than the Shaykh had taught it, and the Shaykh was humble enough to respond. ‘I have learnt something new. Today you are the Shaykh!’ So we should remain open to ideas and give them consideration even when coming from people less knowledgeable than us.