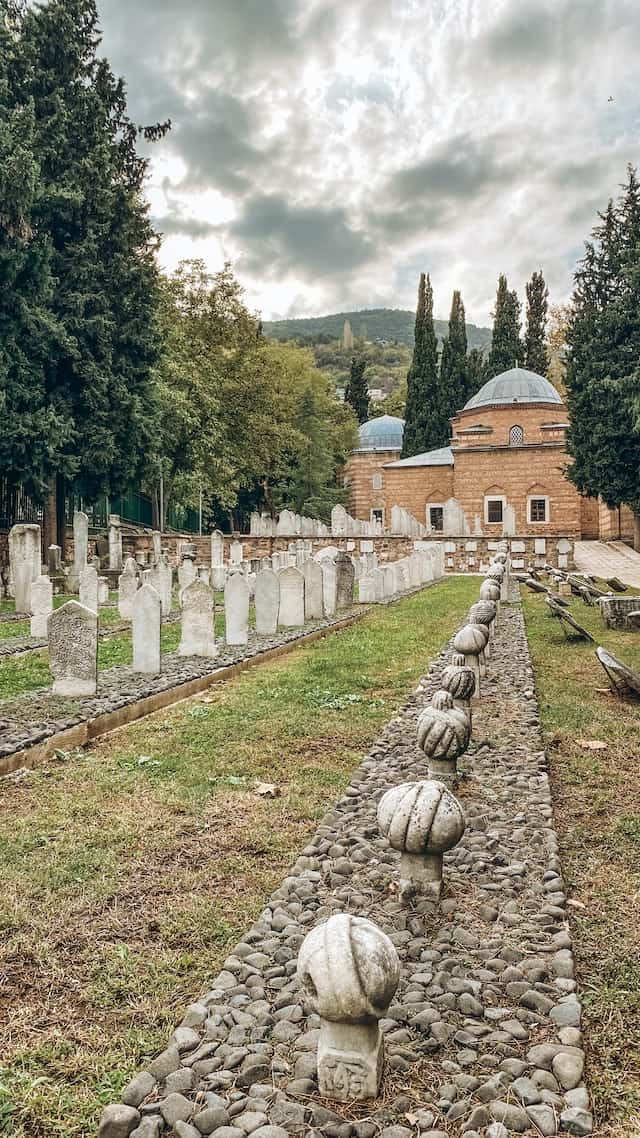 In general it is permissible to have a small structure constructed over a grave and have a gravestone to mark it. The structure should be humble and not higher than a handspan.

From a shariah point of view, you should not construct a large structure over a grave. It should be low / close to the ground. Jabir (may Allah be pleased with him) said:

The Messenger of Allah (ﷺ) forbade that the graves should be plastered (made into permanent structures), used as sitting places (for the people) or building over them. [Muslim]

Sufyan at-Tammar said he saw the grave of the Prophet humped. [Bukhari]

Jabir ibn ‘Abd-Allah (may Allah be pleased with him) said that the Prophet (peace be upon him) made a (lahd) niche in the side of the grave, and bricks were erected on it, and his grave was raised from the ground about a handspan. [Sunan Al-Bayhaqi]

Tirmidhi said that scholars disapprove of raising the grave more than necessary and that it is raised to indicate that it is a grave, and so people will not step or sit on it.

Imam Nawawi also commented that the sunnah was not to build a structure higher than a handspan. The scholars were strict about this because it was a jahiliyya practice to glorify and even worship tombs.

Abu Hurayrah (may Allah be pleased with him) reported:

The Prophet, peace be upon him, said: ‘May Allah destroy the Jews, because they used the graves of their prophets as places of worship. (Bukhari and Muslim)

It is permissible to have a gravestone, that is not extravagant to mark the grave so that it can be recognised. This is based on a hadith narrated Anas that the Prophet (peace be upon him) “placed a rock over ‘Uthman ibn Maz’eun’s grave so that it could be recognized.” [Ibn Majah]

It is not permissible to sit on a grave, or lean on it, or walk over it. ‘Amr bin Hazm narrated that the Prophet (peace be upon him) saw me leaning on a grave, so he said:

‘Do not harm the dweller in this grave or do not harm him.’ (Ahmad)

Abu Hurayrah (may Allah be pleased with him) reported that the Prophet (peace be upon him) said:

It is better for you to sit on a glowing coal that burns through your clothes to your skin than to sit on a grave. (Muslim)

Some scholars say it is better to avoid inscribing verses of the Quran on the gravestone in case the gravestone deteriorates and this would be disrespectful if it falls on the ground.

Free Booklet on Spiritual and Practical Preparation for Death

Free Booklet on Birth and Death Rites in Islam