How do you divide the chores in the house? 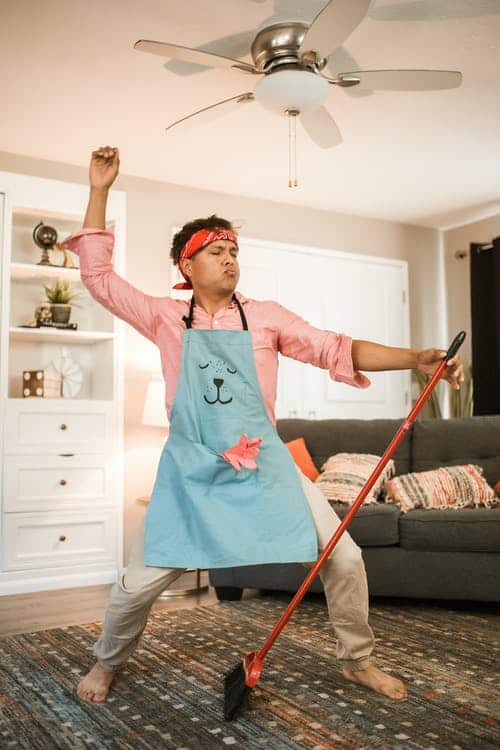 Aisha (may Allah be pleased with her) is reported to have said:

“He did what one of you would do in his house. He mended sandals and patched garments and sewed.” (Adab Al-Mufrad)

In another narration, Aisha, the wife of the Prophet Muhammad (peace be on him), was asked:

“What did the Prophet (peace be on him) use to do in his house?”

She replied: “He used to keep himself busy serving his family (كَانَ يَكُونُ فِي مِهْنَةِ أَهْلِهِ) and when it was the time for prayer he would go for it.” (Bukhari)

Aisha (may Allah be pleased with her) when asked by the companions what the Prophet (peace be on him) used to do around the home, replied that he used to help as any other man did, in other words he was no different from the men at that time, who as a norm, helped around their homes and were involved in the daily chores.

I don’t know where we developed the master-slave relationship within marriage that is common, with the husband watching the TV while his wife is wiping the floor! Where did this develop from? It is not from the sunnah. We need to re-visit this.

Boys should be raised to appreciate women’s role and input in the home, not just appreciate men’s professions and only see that men are working all day and bringing in the income, even though the women are also working and probably paying half the mortgage. They need to appreciate her and help her. If men are not willing to help their wives look after the home and child, then they have not been brought up well.

What is the concept of qiwama (guardianship) in marriage

Allah stated in surah Nisa that men are the qawamun (guardians and protectors and providers) of women. This is one of the commonly misunderstood concepts of Islam. Allah Almighty is not saying here that men are first class and women are second class. It is not a question of superiority and inferiority, it is a question of responsibility.

The husband has been given the financial responsibility to care for and protect his family. With this responsibility he also has the final authority to take decisions in the interests of the family. This does not give him the right to be a dictator. He should share the responsibility of decision making with his wife, but in a scenario where they cannot agree, he takes responsibility for the decision and he bears the consequences. (And if he is wrong, he learns that he should have listened to his wife!)

In families, as with any organisation, there needs to one person with who has the authority to take the final decision. In Islam that position is given to husbands. Without leadership, any organisation faces chaos. By nature we have different opinions, view points and priorities. When we cannot agree this leads to conflict and lack of clear direction. Good leaders and good husbands have good communication skills, and consult their team or their wife. His leadership should carry his family with him, and they should be supportive of him, rather than feeling disempowered or trampled on.

Men like to think that they are superior but Allah Almighty mentioned clearly the best and the most honourable is not a man or woman, but the best in conduct:

O mankind, We have created you male and female, and appointed you races and tribes, that you may know one another. Surely the noblest among you in the sight of God is the most god-fearing of you. God is All-knowing, All-aware. (49:13)

What are the limits of qiwama

The marriage should be a relationship of mutual respect rather than a set of directives and one-sided expectation. Moreover, obedience to a husband has limits. The husband has the final say as long as there is no sin in the decision he is making. If there is sin, the wife should not obey.

There is no obedience of the creation wherein there is disobedience to the Creator. (Musnad Ahmad)

Anything which involves disobedience to Allah Almighty is impermissible. If the husband wishes for his wife to remove her hijab in front of his family members who are non-mahram, she does not need to comply. Though he might say, ‘Who are you tell me this?’ Use your wisdom and inform him through another person who he will listen to.

It is the man’s responsibility, not superiority, to provide for the house, to protect it and to lead it. As in the hadith, Abdullah ibn Umar reported that the Messenger of Allah (peace be on him) said:

He mentioned al ab (the father) and al um (the mother). They have a shared responsibility. And they should have mutual respect from both sides.

Unfortunately we do not always see this. Instead we have a genetic dictatorship. In some homes, the dictator is the wife, but the model is wrong if either the wife or the husband is a dictator. There are men who suffer abuse and are even close to suicide because of their treatment or emotional abuse by their wives which is their dark secret. They can’t talk about this as it is taboo.

How do you change generations of the attitude that a father dictates everything?

The attitude that has been passed down by generations, ‘my way or the highway’, can only be removed by having more education and raising awareness in the community. If we keep silent it perpetuates this cultural programming and it is business as usual.

The best role model is the Prophet (peace be on him). He did not ‘rule’ his household, but took advice from his wives, showed them kindness made them feel part of decision-making. This is how we should make our marital relationships as well.

“Men shouldn’t lift a finger in the house”