Can I make a dual intention for the 6 fasts of Shawwal? 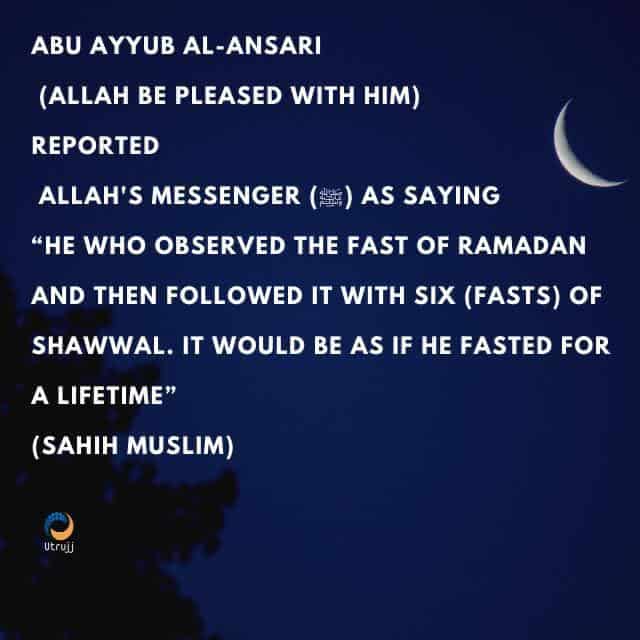 The Prophet (peace be on him) used to fast the 6 days of Shawwal. They do not have to be fasted consecutively but at any time during the month.

The reward of fasting the 6 days of Shawwal

Abu Ayyub Al Ansari (may Allah be pleased with him) reported that Allah’s Messenger said:

He who observed the fast of Ramadan and then followed it with six (fasts) of Shawwal, it would be as if he fasted for a lifetime. (Sahih Muslim)

In this authentic hadith, the Prophet (peace be upon him) said that the fasts of Ramadan with the 6 days fasts of Shawwal were like fasting a dahr. Dahr doesn’t mean a whole year, it means lifetime.

Many people are more familiar with this narration:

Fasting one month equal ten months, and six days afterwards equals two months and this is one year. (Nasa’i and Ahmad)

It is from this narration that people equate these fasts with one year of fasting. Either way, we can see that the reward is huge. So both narrations are saying the same thing, if you do this every year it’s like you have fasted the whole year all your life.

Should we make up missed fasts before we do the 6 fasts of Shawwal?

The hadith says, ‘Whoever fasts Ramadan and follows it by fasting 6 days in Shawwal’, and as the missing days of Ramadan are part of Ramadan, you ought to make up the missed days of Ramadan before you do the additional fasts of Shawwal. This is one opinion.

Can we make a combined intention to make up missed fasts and the Shawwal fasts?

Yet another opinion is that you can combine the intention of the fard which you missed and the sunnah of Shawwal, but it’s disagreed upon.

Can you make the Shawwal fasts up first and then the Ramadan ones later?

Yes you can. But in general we should fulfil our obligations before we do extra voluntary acts of worship. Just as we should pay zakat before we give sadaqa, or perform Hajj, before going on Umrah, the Shawwal fasts are less important than the Fard. Though the Sunnah is important it is not an obligation. Therefore preferable to make up the missing Fard before doing the Sunnah.

Do the 6 fasts after Ramadan have to be made up in Shawwal?

According to some scholars, it is possible to postpone the 6 fasts of Shawwal. These scholars in the Maliki school say that the 6 extra fasts can be done even after Shawwal. Though this is a matter of disagreement among scholars, even within the Maliki school. Those who follow the opinion quote Ibn Al-Arabi Al-Maliki that the Hadith of the Prophet (peace be upon him) saying:

“Whoever fasts Ramadan and follows it with six of Shawwal… is just as an example, and what is meant is:

He said: This is an amazing consideration, so know it. (Tahdheeb al-Furuq 2/191)

While the majority of scholars in the Hanafi, Maliki and Shafi school are of the opinion that the hadith is restricted to Shawwal, this opinion gives hope to those who missed completing the 6 fasts during Shawwal. They can fast after Shawwal with this intention, especially ladies who may have many fasts to make up from Ramadan.

Some people feel that this opinion will make people relaxed about keeping up the momentum to fast after Ramadan. It is not my intention to discourage people who could have fasted in Shawwal from fasting, or to encourage people to postpone fasting, but it means that those who were unable to fast in Shawwal due to their personal circumstances, still have the hope of earning the same reward inshallah as those who fasted in Shawwal.

Why do we fast again in Shawwal when we just completed Ramadan?

The fasts in Shawwal are sunnah, whereas the fasts in Ramadan are fard. The sunnah always complements the fard.

Ibn Rajab commented that Allah gave us the sunnah with every fard as it complements the fard, as we never manage to fulfil our obligations with a 100% grade, so the sunnah makes up for our shortfalls. Thus the obligation of Ramadan is complemented by the six days of Shawwal, which compensate for the mistakes and shortcomings in Ramadan.

The second reason is that fasting additional fasts shows dedication and commitment. It shows the desire to continue worshipping Allah, not just in Ramadan, but continually and beyond it.

The third reason is that it shows gratitude to Allah for His favours.

The Prophet (ﷺ) wanted us to be constantly engaged in ibadah (worship) as this shows our gratitude to Allah for His countless favours. As Allah Almighty said in the verses on fasting in the Quran, the purpose of fasting is to make us grateful:

Allah intends ease for you, not hardship, so that you may complete the prescribed period and proclaim the greatness of Allah for guiding you, and perhaps you will be grateful. (2:185)

We show gratitude to Allah through our worship. This is why when the Prophet (ﷺ) was asked why he was praying in the night when Allah had forgiven him all his sins, he replied that it was out of gratitude for Allah.

The reward of having all of our sins forgiven is so huge, would we not want to thank Allah for it? Fasting in Ramadan with the hope and expectation of forgiveness of our previous sins, is paid on the day of Eid al-Fitr, the day of rewards.

Abu Hurayrah (may Allah be pleased with him) reported that the Messenger of Allah said:

Therefore resuming fasting after al-Fitr is how we can thank Allah for this blessing. There is no blessing greater than the forgiveness of sins. The Prophet (ﷺ) taught us this through the beautiful hadith explaining why he spent so long in night prayer.

Al-Mughirah ibn Shu’bah reported that the Prophet (ﷺ) would pray until his feet were swollen. It was said to him, “Why do you do this when Allah has forgiven your past and future sins?” The Prophet said, “Shall I not be a grateful servant?” (Bukhari and Muslim)

One of the signs of acceptance of your worship is showing gratitude.

Fasting the extra six days are optional. They should not be considered an obligation, and Imam Malik was very clear that one should not turn these six days into an additional obligation after Ramadan, as Ramadan is an obligation but Shawwal is voluntary. Therefore his opinion was that it would be haram to fast the six days of Shawwal as if it is obligatory; one should be cognisant that they are a bonus.

May Allah enable us to be fulfil our obligations and be consistent in our efforts to please Him. Ameen

What is the significance of the shawwal fasts?

When should I make the intention to fast?