Can you say ‘salam’ to non-Muslims? Unpicking the confusion that the salam is exclusively for Muslims. 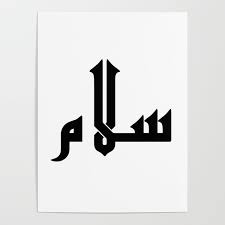 Common misconceptions – due to the misapplication of hadith

There is common opinion that you should not greet non-Muslims with the salam. Or that you should only reply to them with ‘walaikum‘ not ‘walaikum asalam‘. This opinion is based on the hadith:

Suhayl and Abu Hurayrah (may Allah be please with them) narrated that the Prophet (peace be on him) said:

‘Do not greet the Jews and the Christian’s before they greet you, and when you meet any of them on the road force him to go to the narrowest part of it’ [Sahih Muslim 2167a -Book 39, Hadith 16]

This hadith has many issues which make it unreliable, which have been examined in the paper of Dr Hakem Al-Mutairi (Al-I’lam A Study of the Hadith: Do not initiate the Salam to the Mushrikeen), who concluded that the hadith is related to a particular occasion when the Prophet (peace be upon him) was on his way to fight the Jews who had betrayed them in the Battle of Ditch. It is not a hadith from which one can derive general rulings for all times. Its scope is limited to a situation of war when one might encounter the enemy en route. We have a detailed examination of this hadith in our blog.

If we come across an ayah or a hadith which goes against the grain of Islam, we need to delve deeper and discover why that is the case. The context is always at the core of any ruling. In this hadith there are problems with the narrator, who suffered trauma and become confused, as well as the wording of hadith which is inconsistent across different narrations, and most importantly it goes against the main principles of Islam which is being kind and respectful towards everyone. It is very dangerous to take a hadith out of its context and apply it generally. Even if the hadith is narrated in Bukhari or Muslim. However, this hadith was not mentioned by Bukhari in the main part of his book – but in the section with the lowest authenticity.

Therefore we cannot use these hadith to create a general ruling, particularly as they related to a specific occasion and that context does not exist. If you meet Jews, Christians or people of any other faith, you can say assalamu alaikum to them.

Greet with the best greeting

The evidence that you can greet non-Muslims with the salam is in the verses of the Quran which say you should greet others in a way better than you are greeted:

And when you are greeted with a greeting, greet [in return] with one better than it or [at least] return it [in a like manner]. Indeed, Allah is ever, over all things, an Accountant. (4:86)

The Prophet (peace be on him) on different occasions said salam to non-Muslims, including People of the Book. You can both initiate the salam and you can greet non-Muslims. It may seem obvious that a Muslim can greet non-Muslims with the salam, but it is a common misconception due the misinterpretation of the hadith above by many scholars as well as lay people.

Some Muslims also mistakenly think that Muslims are allowed to greet non-Muslims with the salam, because Muslims are in a weak position at the moment and when we become strong, we will not greet them, but push them into the narrow part of the road, based on the same hadith. This is nonsense. How can anyone give dawwah and spread the message of Islam, the message of mercy, when they wish to push others to the side of the street?!

If a narration appears in Bukhari or Muslim, and it appears to contradict the common ruling and the general guidance, particularly when this involves the relations between Muslims and non-Muslims living in non-Islamic environments, we need to delve deeper than usual to understand the import of the hadith correctly.

Returning a greeting with just walaikum applied to a specific occasion

There is another hadith which has been wrongly interpreted to mean that you should not initiate a greeting, and if you are greeted, do not give the complete reply wa alaikumassalam warahmatullah, but just wa alaikum only.

When the Jews greet you, they say As-sam ‘alaykum (may death be upon you), so respond by saying ‘alayk (and also upon you). (Bukhari and Muslim)

In fact it is clear from the following hadith, that the Prophet (peace be on him) did not return their taunt with anything more cutting, and in fact reprimanded ‘Aisha for replying to them by wishing them to be disgraced:

‘A’isha reported that some Jews came to Allah’s Apostle (may peace be upon him) and they said: Abu’l-Qasim (the Kunya of the Holy Prophet), as-Sam-u-‘Alaikum, whereupon he (the Holy Prophet) said: Wa ‘Alaikum.

A’isha reported: In response to these words of theirs, I said: But let there be death upon you and disgrace also, whereupon Allah’s Messenger (may peace be upon him) said: ‘A’isha, do not use harsh words. She said: Did you hear what they said? Thereupon he (the Holy Prophet) said: Did I not respond to them when they said that; I said to them: Wa’Alaikum (let it be upon you). (Muslim)

Spread the salam to everyone

There are endless hadith on the importance of saying salam and spreading the salam. It was the first instruction the Prophet (peace be on him) gave to the citizens of Madinah in his first khutbah. As ‘Abdullah bin Salam (may Allah be pleased with him) reported:

I heard the Messenger of Allah (may Allah’s peace and blessings be upon him) say: “O people, spread the greeting of peace profusely, maintain kinship ties, feed others, and pray at night when people are asleep, you will enter Paradise in peace. (Ibn Majah)

He did not say spread the greeting among Muslims only. In the Quran Allah Almighty instructed:

“And servants of (Allah) the Most Gracious are those who walk on the earth in humility, and when the ignorant address them, they say, Peace (Salaam)!”(25:63)

“O you who believe, enter not into houses other than yours without first announcing your presence and invoking peace (saying salaam) upon the folk thereof. That is better for you, that you may be heedful”(24:27)

Abu Hurayrah narrated that the Messenger of Allah (peace be on him) said:

“By Him in Whose Hand my soul is! You will not enter Jannah until you believe, and you shall not believe until you love one another. May I inform you of something, if you do, you love each other. Promote salam amongst you” (Muslim)

“And when they hear ill speech, they turn away from it and say, ‘For us are our deeds and for you are your deeds, peace be upon you; we seek not the ignorant”

Sufyan bin Uyaynah, a pious predecessor, was once asked whether a Muslim can greet a non-Muslim with salam, and he confirmed that they could because ‘Allah does not forbid you in respect of those who do not fight you because of your religion and do not expel you from your homes – from being righteous and dealing justly towards them. Indeed, Allah loves those who act justly’

God does not forbid you to deal kindly and justly with those who have not fought against you about the religion or expelled you from your homes. God does not love the unjust people. (60:8)

The general guidance in Islam is to show mercy (rahma) and have good character, and be an agent of goodness. Therefore when a hadith such as this one appears to contradict this, this suggests that there is something wrong with it such as the authenticity, the narrator or the context of the hadith.

For more inspiration on how to navigate life through the Quran and Sunnah: