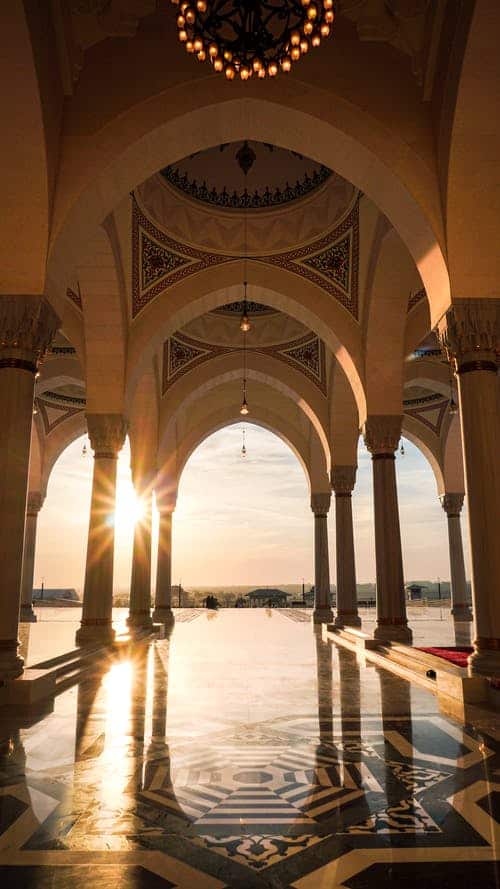 Suhail and Abu Huraira (may Allah be please with them) narrated that the Prophet (peace be on him) said:

‘Do not greet the Jews and the Christian’s before they greet you, and when you meet any of them on the road force him to go to the narrowest part of it’ [Sahih Muslim 2167a -Book 39, Hadith 16]

First impressions of a hadith

This may be the first time you come across this hadith. At first glance it is disturbing. The most concerning issue is that it contradicts the general guidance of Islam, which is to spread love and mercy to all of Allah’s creation.

The general guidance in Islam is to show mercy (rahma) and have good character, and be an agent of goodness. Therefore when a hadith such as this one appears to contradict this, it suggests that we need to check it first – the authenticity of the hadith, the narrator of the hadith, or the context of the hadith. As these will shed light on why the hadith seems to be a misfit or go against the essence of Islam.

Let’s examine this hadith and how we establish the correct interpretation.

Spread the salam to everyone

Firstly, we know here are endless hadith on the importance of saying salam and spreading the salam. It was the first instruction the Prophet (peace be on him) gave to the citizens of Madinah in his first khutbah. As ‘Abdullah bin Salam (may Allah be pleased with him) reported:

I heard the Messenger of Allah (may Allah’s peace and blessings be upon him) say: “O people, spread the greeting of peace profusely, maintain kinship ties, feed others, and pray at night when people are asleep, you will enter Paradise in peace. (Ibn Majah)

He did not say spread the greeting among Muslims only. In the Quran Allah Almighty instructed:

“And servants of (Allah) the Most Gracious are those who walk on the earth in humility, and when the ignorant address them, they say, Peace (Salaam)!”(25:63)

How do we reconcile the hadith which says you should not greet non-Muslims?

We know that there is no contradiction between the Quran and the sunnah, therefore no hadith can contradict the general guidance of the Quran or Sunnah.

This hadith is an excellent example of how the muhaddith critique hadith. We will go through their methodology and how they tackle the hadith which appear to conflict with the main principles of Islam.

This is the summary of a lot of research, including a recent and comprehensive 44-page research paper on this hadith by Dr Hakim Al Mutayri who managed to get to the bottom of the issues.

The very first thing you need to do with any hadith is check its authenticity. If a hadith is not authentic, you need not proceed with the rest of the steps.

Check the authenticity by looking at the reference, the narrator, and which book it appears in. In this instance the hadith has been narrated in Sahih Muslim which means that it is authentic. Sahih Muslim and Sahih Bukhari are the highest levels of authenticity, and we do not dismiss their narrations as weak, unlike narrations from other collections, like Tabarani.

Next you check the chain of transmitters of the hadith. The narrator of this hadith is Suhail bin Abi Salih.

In this hadith, there are three people before the Prophet (peace be on him): Suhail, his father and then Abu Hurayrah may Allah be pleased with him.

Suhail bin abi Saleh is the narrator of the hadith, and the issues arise from him.

The first narrator of this hadith is Suhail, not Abu Hurairah. Suhail was one of the great hafidh and muhadith (scholar of Hadith). However when you read his biography you discover that he lost his brother who was very beloved to him. The trauma caused by this loss led to psychological illness due to which he forgot many of his narrations.

In the science of hadith, for this reason, scholars distinguish between different periods in the lives of narrators. For instance, Suhail was one of the Shuyukh of Imam Malik, and Imam Malik narrated from him. However, there is a distinction made between the period before he suffered the loss and his memory was impacted and the period before when he was fine. If there is a narration from the period after his memory was affected, we are careful in taking it. If the hadith is in line with other similar narrations we take it, if it conflicts or raises doubts, we park it and we do not use it.

You might ask why did Imam Muslim narrate this hadith from Suhail in his Sahih. Imam Bukhari chose not to narrate from Suhail except on three occasions from him, as he was not satisfied that Suhail met his criteria. On these occasions, he quoted the hadith as unverified and unauthenticated, not in the his matn.

Sahih Muslim wrote an introduction, unlike his teacher Bukhari, who did not, to explain how he collected, narrated and organised the hadith in his book. He divided them into three kinds. The first was the most authentic narrations by the most reliable narrators, then the second and finally the third level. Muslim placed the narration by Suhail in the third level, which means that he did not consider it the highest level of authenticity.

Unlike Bukhari, who split the hadith over different chapters depending on the topic, Muslim cited all the details of the hadith in one go. The Muqaddimah (his introduction to the Sahih) contains some of the most important principles found in the creed and methodology of the people of Sunnah and Hadith.

In another narration we see a slight difference in the wording.

‘When you meet the People of the Book.” And in the hadith transmitted on the authority of Jarir the words are:” When you meet them,” but none amongst the polytheists has been mentioned explicitly by name. [Sahih Muslim 2167b: Book 39, Hadith 17]

We see that the hadith refers to Jews and Christians in one narration, the People of the Book in another and mushrikeen (polytheists) in a third. Which one did the Prophet (peace be on him) say? They are not the same. Sometimes you may express a word in different forms, but the meaning is the same. It does not matter if different wording is used when the meaning is same. However, if the different words change the meaning we need to understand which one is right.

4. Check the context – Is the hadith related to a specific incident or a general hadith?

The Prophet (peace be on him) received the revelation from Allah Almighty through the angel, Jibreel and they decided to fight them. The Prophet (peace be on him) was giving his army instructions on their way to fight them. He told them not to greet them with the salam. Salam means peace, it means you are offering the recipient safety, but in the situation of war it is the opposite. Muslims have to honour their word, so you cannot greet them with peace and then fight them. The situation was not a time for social pleasantries, it was time for battle.

At the end of the hadith, it says if you meet some of them force them to the narrowest part of the road. This part is only found in the narration by Suhail. It related to the context of going into battle and is not general guidance for Muslims. It cannot be applied to any ordinary scenario with non Muslims. That would be completely wrong.

If you do not understand that this hadith is specific and extract the lesson that you must not greet non Muslims or say salam to non Muslims, it would be to completely misapply it. Though the hadith is sahih and narrated by Muslim if you divorce it from its context, it will contradict the basic principles of Islam.

Dealing with hadith that appear problematic

The great scholars like Imam Tahawi, who passed away 310 AH, (may Allah have mercy on him) composed two books on hadith which appear problematic; the first is ten volumes ( Sharh Ma’ani Al-Aathat) and is a very important book, the second book is around twenty volumes (Sharh Mushkil Al- Aathar). These two books are very important. Imam Tahawi collected many of these narrations in his book and went through the details. It is very useful for those who are specialised.

This hadith is an important one in understanding how to get to the bottom of a hadith and apply it properly in accordance with the Quran and Sunnah. Our deen is a deen of mercy, and good manners. It would not make sense to understand the hadith as a command to be rude. Dawah cannot be done when one is rude and we live in multicultural societies, so we have to live with graciousness and be the role models of kindness and mercy.

Can you say salam to non-Muslims?