Voting is an amanah. Not voting is siding with evil 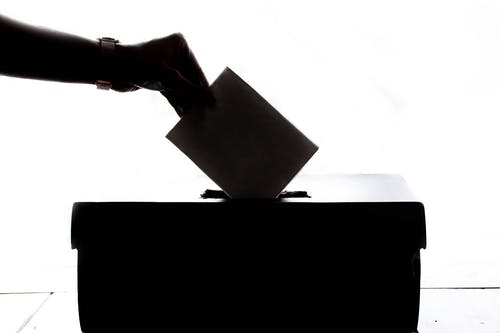 Apathy is not an option 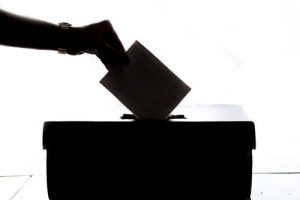 We made what is upon the earth an ornament for it, to test them as to which of them is best in conduct. (18:7)

All aspects of life are a test

Allah Almighty said He made everything on earth an adornment as a test to see who is best in their conduct.

There are many verses in the Quran talking about the fact we will be tested in our actions. All of creation in its varied forms are part of the test we face. Whether we are in the midst of good or evil, our actions and reactions, our active choices as well as our passive choices (by default) are being recorded. We are constantly being evaluated on whether we embrace good, or fight evil, whether we stand up support the truth or not.

Allah Almighty sent the prophets and messengers to guide us. They shed light on what is right and wrong. Out of His mercy, Allah Almighty created our intellect so we have the capacity and capability to make the right choices. Accordingly, we are rewarded if we respond in line with His revelation and the truth, or we are punished when we fail. This is the nature of our test – we have the choice, the capability and the freedom to act.

And cooperate in righteousness and piety, but do not cooperate in sin and aggression. And fear Allah; indeed, Allah is severe in penalty. (5:2)

On a daily basis our tests come in different shapes and sizes, different intensities and reveal the quality of our character and our level of patience under pressure. Whether it is financial transactions or dealing with people, whether we are faced with hardship or have the luxury of living in ease, we are constantly being appraised.

Our children, our spouse, our work are part of our test. Our poverty or wealth, our health or our sickness, whatever state we are in are differing levels of test. So Allah Almighty is warning us to be conscious and careful. Apart from tawheed (the oneness of God) and imaan (faith), the prophets and messengers, from Adam to Muhammad (peace be on them) came to stress the importance of perfecting our character and conduct.

Indeed I was only sent to complete the most noble character traits. (Muslim)

Whatever the test, we need to understand that it is from Allah Almighty and that we have to deal with it in a way that is pleasing to Him. The moment we lose our focus and follow our emotions, especially with anger, we fail. Do manage to maintain patience, or do we lose it? Are we kind and forbearing or not? Do we show mercy or brutality?

Every now and then we do fail some tests, but we need to recognise that there is always a way out no matter how mistaken we are. The way back to Allah Almighty is always quicker and shorter. In the blink of an eye we can turn back to Him.

We are being judged for both our character and our actions. Good actions should emanate from those who have belief, as imaan resides in the heart, but is reflected through our words and actions. It is not rocket science that the pillars are the external manifestation of internal belief: starting with the shahada, which is a verbal expression of an internal belief, followed by four further actions: salah, siyyam, zakat and hajj. They are the proof of our imaan. Imaan without action is worthless.

Co-operate all together in goodness.

Allah Almighty wants us to be active, not passive. Therefore the Quran is filled with reminders to do good. Believers have to be active. In addition, to achieve goodness, believers needs to work together. Allah Almighty has created mechanisms for us to support one another in goodness.

O, You who believe…help one another in goodness and piety (5:2)

Even before Islam the Prophet (peace be on him) was part of a coalition for goodness in the time of Jahiliya, known as Hilf alfudul (Alliance of Alfudul). He witnessed this when he was in his twenties (peace be upon him). This coalition supported the oppressed, defended the hopeless. The Prophet (peace be on him) mentioned that if had been invited to join it after Islam, he would have joined it then as well. During his life, he made treaties with non-Muslims and collaborated with them in order to bring goodness to the community. We need to do the same.

Should we participate in elections?

With elections looming many people are being passive. Some people say this is kufr system and a kufr country so we cannot be part of it. If this is the case, why are you living here? Live somewhere else where you think there is an Islamic system. I’m not aware of one.

What is the proof we can vote in a ‘kufr system’? The prophet Yusuf (peace be on him) when he was in Egypt, asked to be appointed as a minister in the system which was not Islamic, he said:

‘Put me in charge of the treasures of the land; I am honest and knowledgeable.’ (12:55)

I know plenty of people who say it is haram to vote, excuse me this is nonsense. And such fatwas usually come from overseas.

Jabir bin Abdullah (may Allah be pleased with him) said:

We set out on a journey. One of our people was hurt by a stone, that injured his head. He then had a wet dream. He asked his fellow travellers: Do you find a concession for me to perform tayammum? They said: We do not find any concession for you while you can use water. He took a bath and died. When we came to the Prophet (peace be on him), the incident was reported to him. He said: ‘They killed him, may Allah kill them! Could they not ask when they did not know? The cure for ignorance is to ask. It was enough for him to perform tayammum and to pour some drops of water or bind a bandage over the wound ; then he should have wiped over it and washed the rest of his body’. (Abu Dawoud)

The Prophet (peace be on him) demanded why they hadn’t asked when they didn’t know. Sometimes you can kill somebody figuratively by delivering the wrong Fatwa. If you don’t understand something don’t deliver a Fatwa. No matter how high your rank, if you do not live here and do not understand the reality here, then do not deliver a fatwa. For those who are hesitant about voting I can assure you it is an obligation. You can minimise evil and this is our obligation, we have to come together as one hand for the sake of our community and our country and chose the right people, whom they will serve better and care better.

Being active in the promotion of good

We need to be among those who change our reality for the better. Part of this is showing our solidarity as Muslims and to minimise evil as much as possible. Do not feel despondent that we are a minority. As per the hadith, if we see evil, we have to do something about it:

We need to be among those who change our reality for the better. Part of this is showing our solidarity as Muslims and to minimise evil as much as possible. Do not feel despondent that we are a minority. Statistics show that we can change the course of this election by 30% if we come together. I know plenty of people who say it is haram to vote, excuse me this is nonsense. And such fatwas usually come from overseas. Allah Almighty said:

Let there be a group among you who call ˹others˺ to goodness, encourage what is good, and forbid what is evil—it is they who will be successful. (3:104)

It is therefore clear that we have a part to play. We cannot be silent spectators. Yes, there are plenty of hypocrites in the political arena, but we have a principle in shariah called ‘Jalbul masalih wa dar’ul mafasid’ which means that we have to side with whatever brings goodness and protects the common good. We have to choose the lesser of two evils, and minimise harm to our community.

We have to support those who are truthful. We have to choose people of principles. Not Islamophobes, racist, liars and hypocrites, who call our sisters shameful names and get away with it. No, they should not get away with it. If you vote for somebody, you don’t necessarily adopt his religion and his party. But you have to minimise the harm.

By not voting you are supporting the candidates who are already in power. This is a passive action. Passivity is not a characteristic of the believer.

Having the right to vote is an amanah. Allah Almighty will ask about our votes. Who did you support? Who did you vote for? If you reply, ‘No one. They were hypocrites,’ that is apathy. Worse than apathy, it is supporting evil. When you have a choice between two candidates and one is more dignified than the other, if you choose not to support him, by not voting, you are supporting evil.

We ask Allah to enable us to cooperate to deliver goodness, and cooperate in promoting goodness and be people of goodness. Ameen.

For more information on voting: Get out and vote

How much impact Muslims can have on the vote