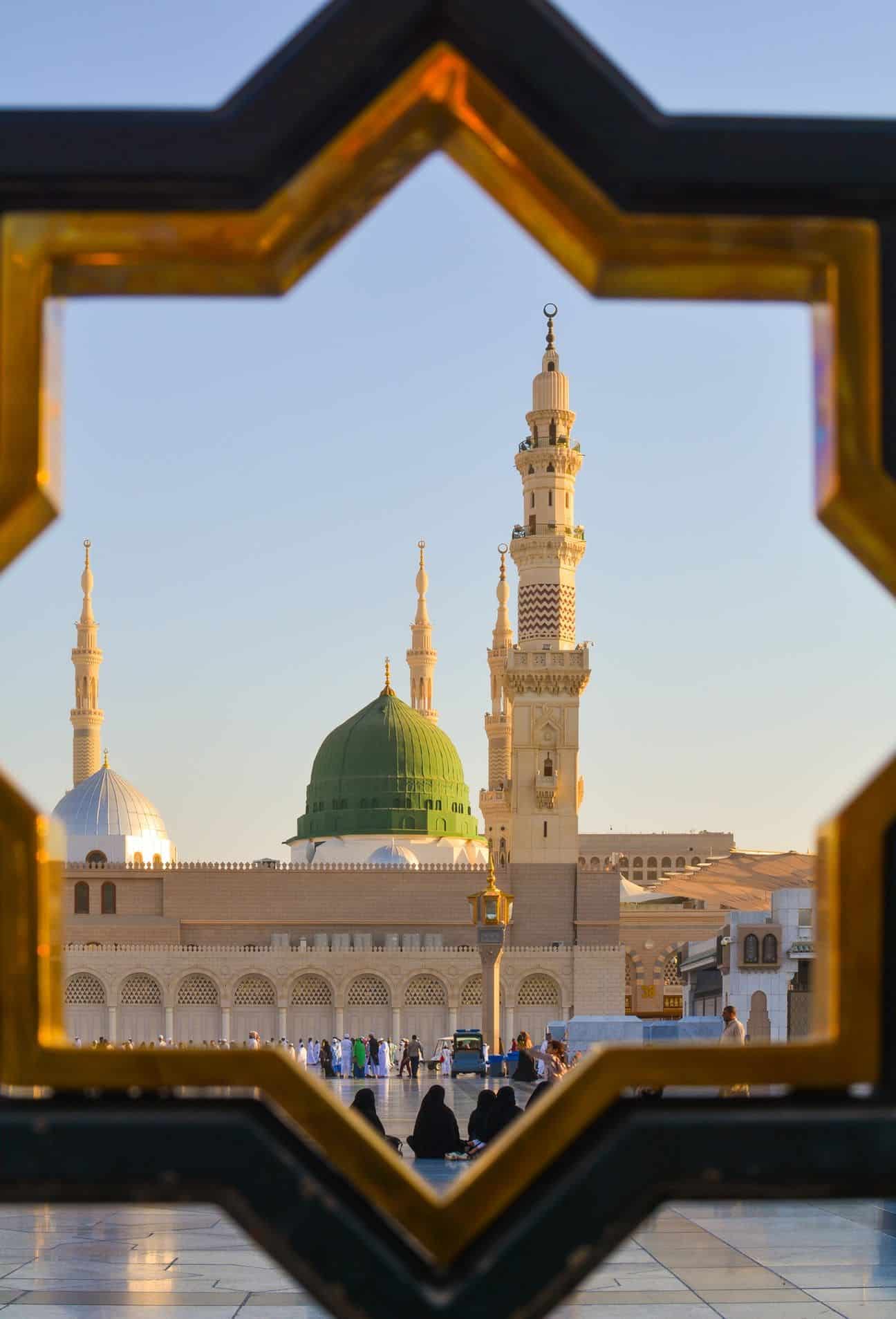 During his life in Makkah, in the early years after the revelation, the Prophet Muhammad (peace be on him) began spreading the basic concepts of Islam, but as he (peace be on him) and his followers were met with hostility, discrimination and persecution, those 13 years were characterised by survival – at a personal level to survive the constant psychological attacks, physically staying alive while under threat of assassination and during the severe hunger during the Boycott of the Muslims between 616-619 AD. Islam was a fledgling religion in an antagonistic environment. Though supported by the Divine, there was no prospect of establishing a society based on new ideals.

This prospect became a reality in Madinah, following the migration of the Prophet (peace be upon him) to Yathrib which would later become known as Madinah (the City), the situation was different. The Prophet (peace be on him) and his small community of followers arrived in a city which offered the chance to bring in changes and establish the first Islamic society.

What was the foundation on which the Prophet (peace be on him) built a successful society in Madinah?

When the Prophet Muhammad (peace be on him) arrived in Madinah, he made an opening speech, which was concise and comprehensive speech. Abdullah Ibn Salaam, the highest Jewish Rabbi in Madinah, heard that speech and declared:

Oh People, feed the food, spread the salams among you, maintain relationships with your families and relatives, and pray during the night while people are sleeping, you will be admitted to Jannah peacefully”. (Ibn Majah)

In another narration, He (peace be on him) said to worship the Most Merciful.

This was the foundation of the society in Madinah. According to this narration, there are 5 pillars to establish a society:

The importance of worshipping One God, which means having consciousness of the Divine. In built in this is a sense of accountability – knowing that ultimately everything will be put before God to be judged. The first pillar of society is therefore building one’s relationship with God Almighty as this forms the basis of a truly ethical society, as divine laws form the criteria of morality.

Islam is a religion of love – love for God Almighty and for all of His creation. Our concern for others is demonstrated through tangible acts that benefit and serve others as well as acts of ritual worship that connect us back to God Almighty.

Looking after the destitute and the vulnerable is therefore a key part of establishing a successful society. Otherwise, we have a society in which there is a great divide among the haves and have-nots, the ultra-rich and the poor, as we have today within society and also between wealthy nations and those crippled with debt.

The Prophet (peace be upon him) made humanity and compassion the second pillar of society. This means being aware of the needs of others and connecting with them, rather than having a socially divided society, where one class has no idea what the others are going through. It is establishing co-operation and bonds between people and encouraging charity and welfare. It means spending on beneficial projects, rather than pointless or narcissistic things.

The third pillar of society is to ‘spread salam’ – Salam is a greeting of peace. It is also about positivity, cheerfulness, and communication. This means foster love among yourselves, as the Prophet (peace be on him) said:

“Shall I not tell you how to spread love among you, spread the salams among yourselves”.

You will not enter paradise until you believe, and you will not believe until you love one another: ‘Spread Salaam’ (the greeting of peace) among you. (Muslim)

Spreading the salam means to communicate your love for humanity. And to create harmony and cohesion.

The fourth pillar is to maintain contact with family members. It is well known that the family unit is the bedrock of society, the stronger the family, the better the outcomes for society. When the family breaks down, a whole range of social problems ensue which become harder and harder to fix.

Goodness begins with one’s family. It should be the default. The Prophet (peace be on him) said:

The best among you is the best to his family. (Tirmidhi)

The family is where goodness begins. This is why we have the proverb ‘charity begins at home’. This applies equally to a man’s side of the family and a woman’s. God Almighty wants us to have strong families. The family is strong when the relationships within it are based on love, trust and respect.

The purpose, beyond marriage, is not just to have a family, but also to have tranquillity in the family structure. The presence of absence of sakeena impacts the emotional wellbeing of the couple as well as their children, who are the offspring, or the outcome of the marriage. When a marriage is well-established, on a good base, and strong principles then what follows is fruitful and beneficial. Similarly ensuring that children look after their parents, is important, particularly as they become elderly and need help. Maintain good relations with siblings, and extended family creates a healthy support network.

The fifth pillar of society is ‘pray in the night’ this a sign of a strong relationship with God. To awaken the in the night, for the sake of God alone to offer voluntary prayers shows sincerity. It is away from the hustle and bustle of the day and from anyone’s gaze, and it gives individuals the chance to reflect on their life, their priorities and recharge their spiritual batteries. It is this nightly spiritual reboot which will enable individuals to be mindful of God during the day, in their relationships, interactions and transactions. A society without a soul, is a society which will gravitate towards dissolution, corruption and personal gratification.

How did Islam improve the position of women in Madinah?

In addition to the pillars of society, it is important for any well-functioning society to respect women and ensure they are accorded their rights. The revelation is the Constitution for Muslims and we have two lengthy chapters, Surat al Baqarah and Surat An-Nisa, which are filled with verses of rulings [ayat al ahkam]. These verses are important as we derive from them the rulings by which we live our lives., in conjunction with the Sunnah (the sayings and practice) of the Prophet Muhammad (peace be upon him). For instance, in Surat al Baqarah contains the rulings on marriage and divorce, khulah [how a woman seeks divorce], the waiting period after divorce, death, rulings relating to purification, and intimate relationships. These were all revealed in Madinah.

We also have a whole surah about women, Surah An-Nisa which provides their rights in general, and the establishment of their inheritance shares. God addresses women and talks about their importance and roles in the community.

How to empower women presence in the Community?

This process started before the migration to Madinah [Hijra].

We can see from these narrations that women were already present in all spheres of the community life in Madinah. There were of course some cultural differences between Makkah and Madinah, as there are cultural differences today within countries. Islam did not object to any cultural practices unless they contradicted Islam’s principles, in which case, Islam replaced culture.

Prophet Muhammad (peace be upon him) allowed the participation of women in salah, in congregations, Eid prayers, communal activities, and even to follow the troops on the battlefield and nurse the wounded soldiers. Women were participating in all events, and were not isolated.

In the Quran, God addresses the entire community by using the expression “Oh you who believe”, HE does not exclude them, or marginalise them. Women are always included in the Prophet’s narrations (peace be on him), unless there is a specific concern that needs to be addressed for women only.

Prophet Muhammad (peace be upon him) empowered women as active believers in the community. He (peace be upon him) encouraged their activism, their participations, within certain limits, depending on the context, circumstances, scenarios as specified by the revelation. In general, women were considered equal partners to men. Until we change the mentalities in our community that women are in fact equal partners and not to be controlled by cultural considerations, some communities will impose injustices on women, not found in Islamic sources.

Why do some cultures still treat women with oppression? Oppression is often a result of ignorance, cultural practices, and traditions. We need better a understanding of Islamic rulings so we know where to draw the line, and differentiate what it is cultural and what is not. We also saw the need to improve access to knowledge, and not only transform the mentalities. The more we acquire sacred knowledge, the more we will be able to improve our understanding and differentiate the cultural aspects from the authentic Islamic and valid practices. Some Muslim women have left Islam because of these oppressive cultural practices and they prefer not to associate themselves with these practices anymore and as a result reject Islam. These cultural practices do not represent the true message of Islam. And, we still have a long way to go.

Seeds of Change – the blueprint for the five dimensions of transformation

The Pillars of Islamic Civilisation

The significance of the first five revelations