How to Respond to Atrocities when Our Leaders Fail Us

Spreading LOVE when there is HATE. 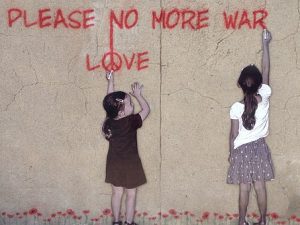 What can we do when we feel helpless watching disasters unfold all over the world? What should our response be? Can we afford to sit back and watch or is there anything we can do?

‘O you who believe, be patient and compete in patience, and protect your frontiers, that you may achieve success.’ (3:200)

At a time of indiscriminate and savage brutality against innocent civilians in many parts of the world without justification, when our ummah faces so many challenges and atrocities, our plight seems nothing short of desperate.

Having said this it is not the first time that our ummah faces a huge challenge. We have been there before. At the Battle of Uhud for instance, during the Prophet’s (peace be on him) time, he had never witnessed a disaster like it. He himself was injured and could have died, and he lost his very best leaders. But it was not the end.

After just a few days, the Prophet (peace be upon him), prepared for another expedition which is well known in the seerah as Hamr al Asad. It boosted the morale, the trust and confidence amongst his companions, and at the same time showed the enemies that the believers were still there and ready to fight for the truth and face any challenge.

Then Allah Almighty revealed after that:

O you who have believed, respond to Allah and to the Messenger when he calls you to that which gives you life. And know that Allah intervenes between a man and his heart and that to Him you will be gathered. (8:24)

Even after they were afflicted by defeat, by injuries, and by a crushing sense of failure, which the Qur’an called karh (deep injury), there were those who responded with ihsan (excellence). Not by complaining. But by doing goodness and through taqwa (obedience) to Allah Almighty. And they earned a great reward.

Allah Almighty sets boundaries for us, even on the battle field. We have limits at all times, which we cannot exceed. We are bounded by the Shariah, and by the revelation.

However, our ummah gets carried away sometimes. There is footage of people distributing sweets after the massacres of so-called terrorists. I wonder who are these terrorists? The civilians? The women? The children? The elderly? When entire cities are bombed, were they all terrorists?

We also have footage of some people who say that they will keep fighting and destroy other cities as well. This is the culture of hatred (bughdah), animosity (hiqad) and bitterness (karahiya), which is completely the opposite of prophetic culture and education. The Prophet (peace be on him) taught us:

Thus a person cannot attain the core of imaan until he loves the same goodness for others as he loves for himself.

‘Would you accept this for your daughter?’

‘Would you accept this for your mother?’

‘Would you accept this for your sister?’

‘Then how come you accept for others?’

The Culture of Love

We can see from this episode that the Prophet (peace be on him) was spreading the culture of loving goodness for others as you love it for yourself. He was spreading the culture of love. Not only for Muslims, for every human. Every human matters. As Muslims, every human is an important person to us. So what about your fellow brothers in Islam? You read the same Book, you pray the same prayer, then how can it be acceptable to kill them, and celebrate killing them?

The Culture of Hatred

It’s a common phenomenon now. The phenomenon of hatred is spreading everywhere. Unfortunately it is not an exclusive opportunity for Muslims. We have seen Brexit being promoted by hatred. Trump based his election campaign on hatred – the hatred for so-called foreigners, Mexicans or otherwise. And conveniently forgot that the indigenous Indians were kicked out when their ancestors were once foreigners on American land.

Corruption has appeared throughout the land and sea by [reason of] what the hands of people have earned so He may let them taste part of [the consequence of] what they have done that perhaps they will return [to righteousness]. (30:41)

…And whoever does righteousness – they are for themselves preparing,That He may reward those who have believed and done righteous deeds out of His bounty. (30:44-45)

When Allah Almighty says be patient (isbiru wa saabiru), we should not be passively patient, but actively patient.

In 2015, it was estimated that Kofi Anan the UN Secretary General made 400 to 500 condemnations for illegal attacks around the whole world. That is more than two to three a day. Condemning this and condemning that. It’s high time we took the initiative ourselves. What can be done? How can we support our brothers and sisters?

The minimum we can do is make sincere du’a. This is important but it is not enough.

At least when we are asked by Allah Almighty, and we will definitely be asked what we did when these disasters happened. At the very least, we will be able to say, ‘We did our best, Ya Rabb. We donated as much as we could. We made du’a.’

If there is a march, be there! Tell your friends and families. And you will be able to say ‘I tried, Ya Allah. I was there, I’m tried my best.’

Spread the culture of love, and loving goodness for everyone. Shun the culture of hatred because it is nasty and engenders widespread evil. It leads to more atrocities and calamities in our ummah.

We need to be more active, promote co-operation and lend more support to one another.  Not only for Muslims, but we should give a hand to anyone who is suffering from oppression, . We should support a just cause wherever it is, and we should be supportive of justice everywhere.

The paradox: you become strong when you admit you are weak

Be happy, be moderate and do as much as you can