How to acquire wisdom

How can I get hikmah? 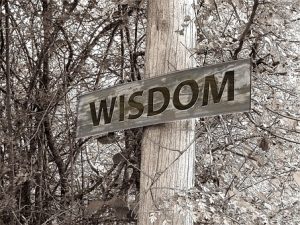 He grants hikmah to whom He pleases, and he, to whom hikmah is granted, is indeed granted abundant good. But none remember (will receive admonition) except men of understanding. (2:269)

Are we born with wisdom or can we gain it? Are wisdom and knowledge the same thing? What is the best way to offer guidance to those who constantly create trouble?

Hikmah is the gift of wisdom.

Merely knowing what is right and wrong doesn’t necessarily mean we apply it in our daily lives. Nor that we are effective in imparting this to others. We need hikmah, a deep and practical wisdom to guide us through our interactions with others and in making day to day decisions.

It is only natural that as we go through life we fall out with people, rub them up the wrong way or get hurt ourselves. Knowing how to handle these situations affects how successful the outcomes are.

Allah’s Messenger (peace be on him) said:

How do we get wisdom

Like imaan, which is also a gift, we can ask for it and work on it. With consistency and sincerity and continuous du’a we can gain better understanding and have hikmah in our words and actions. It is reported that the Prophet (peace be on him) said:

When Allah wishes good for someone, He bestows upon him the understanding of deen.  (Bukhari and Muslim)

Experience gives hikmah. Pious elders have hikmah. Some people are wise without being knowledgeable. And knowledgeable people aren’t always wise. We need both knowledge and wisdom. Neither on its own is enough.

Balance the harm and the good

As Islam is a social religion, we are encouraged to spend time others whether our families, or within the society. Therefore, the one who tolerates harm but mixes with people is better than the one who isolates himself and shuts himself off from the community. However being in the community means we will inevitably clash with others or find they disappoint or annoy us.

There are people whom we come across within our communities and even members of our families who stir up trouble. Being blunt usually makes the situation worse. The best way to deal with them is through diplomacy and tact than to inflame them and create even greater problems, through sheer stubbornness and egoism.

Rather than being provocative, we should understand and react to the personality of the people around us. Assess the situation, contain people and chose words carefully.

Balance the harm and good as it is sometimes better to accommodate a small evil than flare up a bigger one.

There are other times when we need to have a voice.

It is much better to vote and be in the system than abstain from elections and have no voice. This is more harmful to the community.

We also need to think before we speak. It is impossible to un-say something once it’s said, and better to think first than regretting it later.

Hikmah in relationships. What to do when someone is upset

We have to care about others and if they are upset with us it concerns us. We shouldn’t assume we did nothing wrong but we should analyse the situation and see if we were to blame and try and rectify the situation. Some people can be extra sensitive and super touchy but we should try and patch up (though not at the expense of our dignity!)

Though Allah Almighty can forgive everything except dying in a state of shirk and transgression against others. If we wrong others, we need to gain their forgiveness, as Allah Almighty can overlook what is against Him though His forbearance, but what is against others can only be forgiven by the individuals. So, we should forgive others and keep our hearts free from grudges. Empty the space so better things can occupy it.

Tadabbur and tafakkur are pondering and reflecting over the ayahs of the Qur’an. They develop in the mind and then should be put into practice.

And recite (O Muhammad) to them the story of him to whom We gave Our ayat but he threw them away, so Shaytan followed him up, and he became of those who went astray. (7:175)

Invest in your akhirah

The Messenger of Allah (peace be on him) said:
‘Do you know who the muflis is?’ They said: ‘The muflis among us is the one without a dirham or assets.’ He said: ‘The muflis in my Ummah is the one who comes on the Day of Judgement with prayer, fasting and zakat. He comes and has insulted this one, falsely accused this one, eaten this one’s wealth, spilt this one’s blood and struck this one. This one is given from his good deeds and this one from his good deeds. If his good deeds finish before that which is upon him is not paid off, it is taken from their sins and they are thrown upon him. Then he is thrown in the Fire.’ (Muslim)

We can avoid bankruptcy if we:

Certainly think hard before you make a vow.

Nadhr is when you make a promise of what you will do as a way of thanking Allah Almighty in return getting for something you want.

Your vow only counts once you have made it aloud, not just if you thought it. It

If you make a vow, you have to fulfil it. If you break a vow you need to expiate it by fasting for three days or feeding ten poor people. Until then your debt hangs over you until your death.

If you make a vow that is a sin to fulfil, you should not fulfil it, but you still have to expiate it.

In doing dawah, just as Allah Almighty comforted the Prophet (peace be on him) when he said:

It is not our job to convert people, only to pass on the message we have been given. Guidance is from Allah Almighty alone. Islam has to enter the heart naturally. Just assess your style and clarify and disseminate Islam, then leave people to choose whether they convert or not. Don’t be disheartened if people reject the truth as it could be that they are not receptive yet. And continue to make du’a for them. It is hard to change people’s perceptions once they have formed an opinion.

‘Let there be no compulsion in religion: Truth stands out clear from error: whoever rejects evil and believes in Allah has grasped the most trustworthy hand-hold, that never breaks. And Allah hears and knows all things.’ (2:256)