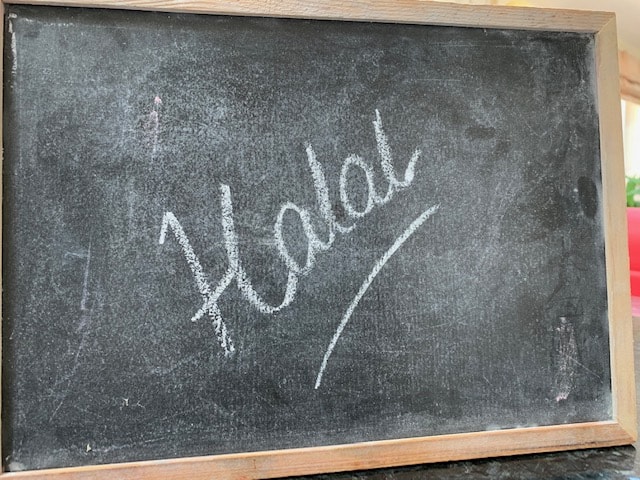 ‘…They say trade is but like riba,’ while Allah has permitted trade, and prohibited riba. So, whoever receives an advice from his Lord and desists (from indulging in riba), then what has passed is allowed for him, and his matter is up to Allah… (2:275)

No good is there in much of their private conversation, except for those who enjoin charity or that which is right or reconciliation between people. And whoever does that seeking means to the approval of Allah Almighty – then We are going to give him a great reward. (4:114)

The Good. Not just the Bad.

We always talk about the seriousness and dangers of disregarding prohibitions, breaking Allah Almighty’s commands and overstepping halal limits.

Yet when Allah Almighty says in Surah Baqarah ‘They say sale is like riba (usury or interest) but Allah Almighty has permitted sale and prohibited riba,’ He is not just mentioning riba (usury) which is a well-known prohibition, but also directing our attention towards its alternatives.

Again, in Surah Nisa, Allah Almighty addresses another important prohibition which is backbiting, gossip, and whispering which create fitna in the community, but here we also see that He points out that there is a better option such as talks which promote charity, kindness, good deeds or lead to reconciliation between people.

On both these occasions we see that the Quran is drawing attention from what is prohibited to what is permissible.

Sadly we lack the approach that Allah Almighty has shown us here, but which was adopted by the Sahaba (companions) in the early Years of Islam.

Our job is to come forward and join forces to find halal alternatives, no matter what difficulties and challenges we might face. It is part and parcel of the package we have. When we look at these verses it is amazing to see how Allah Almighty is introducing to us how to be creative in finding alternatives.

As Allah Almighty told us in the Quran that backbiting and gossip is haram but opened the way for halal for us by suggesting instead that we promote charity, which is not just donating money, but utilising our time beneficially.

Instead of spending time in gossiping and backbiting, channel it in charity – not just donating your money, but saying kind words is also charity. In today’s world, the new medium for gossip is social media, magazines and numerous Apps. We must avoid wasting our time on these as they will be recorded in our Book. Instead utilise time in charitable works. Spend time in what is marouf (beneficial) and if you have the skills, reconcile hearts, unify people and unite ranks.

When we came to this dunya (world) we had to face many challenges and it is part of the challenge that we face it. It is not an easy ride to the Akhirah and in any case, life without challenges is tasteless. We have to face these challenges.

We have to find the solutions to the problems rather than giving up. Let’s learn from the Quran how to navigate our way through the challenges and find the alternatives. It requires sincerity and effort and an open mind to see what the possibilities are. We have to put our trust in Allah Almighty and do our best. Deal with the means and understand the reality, then you will definitely find the alternatives.

When the Islamic finance was introduced, sadly many imams were against it, saying that it was the back door for riba. But we need to understand how it works, its technicalities and the Shariah issues before we dismiss it. You cannot judge it without understanding it. Scholars are trying to provide  halal alternatives. They are not always 100% halal but may be close to it! Isn’t it preferable to leave what is haram and accept something that has some issues but is 70% halal? It is obvious we cannot accept the haram.

The prophetic approach was a gradual approach, known in Arabic as taddaruj. Aisha (may Allah be pleased with her) said that if the verse ‘Do not drink alcohol’ had been revealed early on, no one would have stopped drinking alcohol. Bukhari. The prohibition came very late in Madinah, as part of the later stages of revelation after people had developed a stronger level of imaan, practice, commitment and understanding. This is also what we need to do. We need to build our imaan, increase our knowledge and understanding and with that find halal alternatives.

One important aspect of offering halal alternatives is that we cannot be divided over schools of thought. We cannot let the Hanafi/ Maliki/Shafi’i/Hanbali dominate, we need the Islamic view, regardless of which school it comes from. It is a matter of halal and haram. Islam or no Islam. Don’t make Islam Hanafi or Shafi’i. It is not Abu Hanifa’s battle, but Islam’s battle. It’s not about promoting this school or that school. It is a matter of faith or no faith.

We have challenges beyond our imagination. We have a huge attack in our universities and our communities from Atheism to the extent that there is a slogan saying that it is cool to be an atheist.

Another challenge that we have come across is people who call themselves Quraniyun. They only believe in what is written in the Quran and nothing else, saying that women in their menses can fast because there is no ayah in the Quran that says she is not allowed to fast. When you look in the Quran it is not mentioned in any ayah but it is mentioned in the Sunnah. A group that does not accept the Sunnah as there are some doubts in it. This is another challenge and we need to equip our students with the right tools, knowledge and understanding.

If they insist that women can pray during their menstruation, then you can eat donkey’s meat because there is no ayah in the Quran that says that you cannot eat donkey’s meat or dog’s meat. If that is the case then Bon Appetit.

We have plenty of challenges. We need to be open minded and unite our efforts and our direction because we have a community to lead. We have our youth and our students being attacked from all sides, so we need to be very kind and lenient within the boundaries of the shariah, without sectarianism, without rigidly sticking to one view and avoiding other views. Whatever enables us to fulfil the aim or maslaha (purpose) of Shariah, we should go for it.

We ask Allah Almighty to enable us to live our deen in accordance with His pleasure. Ameen.