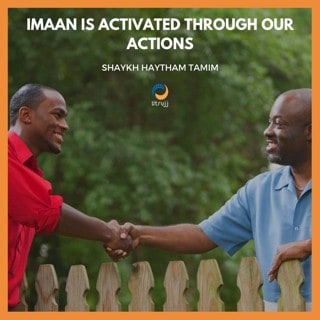 Moving from Faith to Action

What is faith? How do you define it? What does it comprise? And what are its fruits? Imaan has been painstakingly examined by scholars who identified its component parts.

Yet imaan cannot simply reside in the heart, its reality is only evident when it is translated into action. As always, there are obstacles along the way…

Imaan has 60 odd or 70 odd branches, the highest of it is saying la ilaha illa llah; the Shahadah, and the least of it is to remove the harmful things from the root. And hayaa’, (bashfulness) is one of these branches-part of imaan. (Bukhari and Muslim)

The Branches of Faith

This hadith shows that imaan has many branches. And the Prophet (peace be on him) is giving us an overview of the branches of imaan.

Of course, the Prophet (peace be upon him) didn’t stipulate all the branches in this hadith just three of them – the first one is la ilaha illa llah, the last one is removing harmful things out of the way, and the third is hayaa’ (shyness).

Methodology of Collecting the Branches

Scholars, like Imam Bayhaqi tried their best to collate these 77 branches, though it was a formidable task. First, they went through the verses of the Qu’ran, to see which verses classify something as a branch of imaan and gathered them. And then they (Ibn Hibban, Bayhaqi and many others) went through all the hadith also. They put it together and saw there were too many, beyond 77. They deleted any that were repetitions, and this reduced the number to over 60. Imam Bayhaqi took this collection and he composed a huge book of seven volumes called Shu`ab al-Iman, which you can find available online and offline.

The Importance of the Overview

Imam Al Qazwini (may Allah bless him) summarised the book in 1 short volume, which is available free online and has been translated into English. It is like an index for Shu`ab al-Iman. I’m mentioning this because this is something we always see in the sunnah of the Prophet (peace be upon him). He always gave an overview. For instance, ‘Islam has been built on five’ is an overview on the main pillars of the deen.

This is the way of education, simplifying things, giving the birds eye view, just to allow you to see the major principles and then not to be lost in the detail. So you always need to know the branches, the pillars, the principles before you go through the details.

The Prophet (peace be upon him) taught the ummah through the principles. While we have those who specialise in the details and then even the details of the details, this is not everyone’s cup of tea. Not everyone’s speciality. So, we need to know the overall picture.

The Conversion of Imaan into Action

When he (peace be on him) says ‘imaan has 60 or 70 odd branches,’ the Prophet (peace be on him) even though imaan is about belief, the branch he mentioned last, (the lowest branch of imaan is removing the harmful things form the root) is not actually belief per se, but an action, which is driven by imaan. The purpose of imaan is not to stay rooted in your heart, but to transition to action.

In order to move from imaan to action, we need to be grasp what is required of us. And then we have a to-do list which incorporates core values that we have to demonstrate.

Loving Goodness for All

Once we know the principles, we need to spread them, and teach them to our children, starting with the tawheed of Allah Almighty, then imaan and then imbibing concepts like establishing justice.

You see amongst the seven categories that Allah Almighty will give shade of the throne on the Day of Judgement, in first place to a just ruler, but, where are they? We can barely see any! I don’t want to go into politics, but we must tell the truth. So, this shows the importance of justice in our life, to train ourselves to be just and deliver justice, regardless of if it is against your own self, justice must be delivered. Nothing should stop the delivery of justice.

Allah Almighty mentioned in the Qur’an in many verses what might hinder the delivery of justice. In surah An’Nisa, Allah Almighty instructed us to be amongst those who are establishing justice and be a witness for it, even if it’s against your own self:

O ye who believe! Stand out firmly for justice, as witnesses to Allah, even as against yourselves, or your parents, or your kin, and whether it be (against) rich or poor: for Allah can best protect both. Follow not the lusts (of your hearts), lest ye swerve, and if ye distort (justice) or decline to do justice, verily Allah is well-acquainted with all that ye do.” [Quran 4:135]

For each and every principle which we have to establish and implement, we also need to be proactive about removing the obstacles which might hinder the implementation for that principle.

One of the obstacles to the establishment of justice is personal interest. Whether someone is from your own group, your son, neighbour, and so on, it doesn’t matter, establishing justice must be delivered.

Allah Almighty said, even if it’s against your own parents, don’t let your family stop you from delivering justice. I know it’s difficult but taste the bitterness of this difficulty in this dunya rather than tasting the severe punishment in the akhirah – God forbid, even if it is against yourself or your parents.

Notice that Allah starts from the centre and then goes outwards. So, He is begins with your own self, your parents and then your relatives. Sometimes your own relatives might cost you the delivery of justice.

In this instance the Prophet (peace be upon him) was delivering justice not because of his relation as a cousin. In fact, the Prophet actually favoured the neighbour with the complaint to a certain extent, not in a way which he peace be upon him would harm the delivery of justice. So even your own self, your own parent and relatives should not stop you from delivering justice.

Allah Almighty also mentioned the class system. If someone is rich then you feel like you owe him a favour, but if he is poor you feel as though no one would listen to him. So, don’t let the class system prevent you from delivering justice.

Favouring your friends and family is corruption. Or offering and accepting bribes to obtain rulings in your favour is wrong.  Justice should be delivered because that person is poor and helpless, and instead that person allows the delivery of oppression instead of justice.