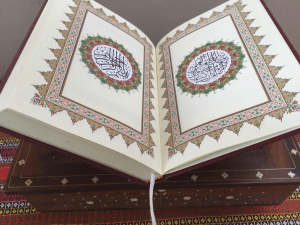 Traditionally we say bismillah before many things.

Is it just cultural or is there more to it? And what happens if we don’t say it? 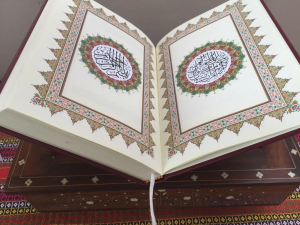 In need of protection

As accomplished as we think we are as a species, it just takes a mere glance from a plane to remind us just how tiny we are. A speck in the world, let alone in our grand, expanding universe.

Not just small, we are utterly powerless. After all, life is a fatal condition. Unlike other species, who have wider vision, we can only see ahead of us and even then we are blind to the angels, jinn and shayateen that inhabit the space around us.

The bottom line is: We need protection.

Just as a baby seeks refuge with its mother, we reach out to the One who provides safety and protection – Allah Almighty. The moment we turn to Allah Almighty, we turn away from shaytan who is ready to cause us trouble, unless we actively banish him by calling on Allah’s name against him. This pronouncement is known as isti’adha.

Safety is one of the essential elements of our faith. Muslims are people of peace. We need to be able to worship without distraction. We need to form a strong connection with Allah Almighty as He is the source of peace and tranquility. Hence by saying ‘audhu billah’ (Oh Allah, I seek protection with You), we turn back to Allah Almighty as His servants, and acknowledge that our security depends on Him. Without His protection we are open to any harm. He Himself says ‘So let them worship the Lord of the House, the One who fed them when hungry and gave them security and protection (aman) from great fear.’ (Chapter 106: Verses 3-4)

If we seek refuge in Him, He will never turn us down. Even when we are not aware, and though we may not comprehend His wisdom, He is responding.

‘Bismillah’ literally means that we start our action seeking help and blessings through the name of Allah.

‘Every important action started without bismillah is cut off,’ meaning cut off from barakah, or blessings.’

Thus many narrations abound regarding the importance of starting with Allah Almighty’s name.

Saying the bismillah gives us the opportunity to clarify our intention so that our act is preceded with a clear idea of why we are doing it. If we want to maximise our reward for any act, no matter how small, we need to think through our purpose.

Actions are only rewarded based on the intention. So saying bismillah out of habit is not the same as actually meaning it.

Why the name Allah?

Allah Almighty has instructed in the very first verse of the Qur’an to be revealed ‘Read in the Name of your Lord Who created, created man from a clot.’ (96:1-2). We should therefore read the Qur’an by His name.

Though we may call upon Allah through His many names, He has a Supreme Name, which He has promised to respond to, whenever we call Him by it. Which name is His supreme name? Ar Rahman, Ar Raheem and Al Hayyul Qayyum are considered by some to be that name, but the overriding majority opinion is that Allah is the Supreme Name. Indeed we swear oaths by it. ‘By Allah!…’

‘Allah’ means the One whom we should worship truly and alone. It is specific, unlike ‘God’, which is generic. It is the One who is necessarily existent, and deserving of all praise. In the Arabic, every letter of the word Allah points to Allah Almighty Himself:

Glorified be His name; everything in creation is pointing to Him and the point of all return. He is our Creator, Provider and Sustainer.

Whatever we do without mentioning Allah Almighty’s name, such as eating, is left open to shaytan’s sabotage, exploitation and corruption.

Linguistically, every rebellious one from amongst mankind or Jinn is called Shaytan (devil/satan). The Shayateen al Ins are the devils from amongst mankind, and are more powerful than those from the world of spirits, the Shayateen al Jinn, as the former will often deploy the latter. Furthermore, the isti’adha will not eliminate the human shayateen.

He is described as ‘Ar Rajeem’ – the Outcast. This is derived from the root word rajama, to stone. It refers to driving out or firing from the Mercy of Allah Almighty.

Saying bismillah keeps connecting us back to Allah Almighty and if we make it part of our life, saying it before commencing any act it not just keeps us mindful of Him, but should prevent us from doing something disliked or forbidden.

It is worth noting that saying bismillah before doing a haram act, such as consuming something haram is wrong. Some opinions would consider this an act of kufr, disbelief, as the implications are of making the haram halal.

Though we may have heard our mothers and grandmothers say bismillah frequently, knowing the power of bismillah changes our perception of this phrase and follows not only in their footsteps but in the immaculate example of our Prophet (peace be upon him). Doing so, blocks shaytan out of our acts, bringing us peace of mind, as well as body and soul.

Does shaytan have a physical presence or are his whisperings metaphysical or metaphorical?

Are they really present? Yes, but Allah put a veil between us and them. How can he whisper if is he is not present? Allah said he is your real enemy. He is from jinn. We cannot see jinn because they are in the unseen realm, that is why Allah told us that we cannot see them. If we could see them, Allah would not need to tell us that they are there. They have the ability to show themselves. We say the istiadha to protect ourselves from them, for instance when we enter the bathroom and seek protection from them, they disappear. In the darkness or places where you are afraid you take Allah’s name to be protected.

“When a person is born, Satan remains hidden from him. If one remembers Allah Almighty, he will leave. If one does not remember Allah, he will remain fixed over his heart.” (Bukhari)

Adhkar make them physically disappear, the more you remember Allah the less shaytan can attack you. If you are not counteracting the shayateen, by remembering Allah shaytan is always there.

Shaytan is on our chest constantly inciting us, but when we say the istiadha, astaghfirullah or alhamdulilah or bismillah, he disappears.

Anas ibn Malik reported that the Messenger of Allah (peace be upon him) said:

“Verily, Satan is lying in wait over the heart of the son of Adam. If he remembers Allah, Satan retreats. If he forgets Allah, Satan will devour his heart; that is the ‘whisperer who retreats.’” (114:4) (Musnad Abi Ya’la)

Anas ibn Malik reported that the Messenger of Allah (peace and blessings be upon him) said:

“Verily, Satan flows through the human being like the flowing of blood.” (Muslim)

Why do we recite the istiadha before recite the Quran as we are going to be saying Allah’s words? Simply because Allah commanded us to. He said:

So when you recite the Qur’an, [first] seek refuge in Allah from Satan, the expelled [from His mercy]. (16:98)

There is more on the topic in the chapter called Laitul Jinn in Sahih Muslim. It is about the night when the Prophet (peace be on him) visited the jinn.