Why is there so much suffering in the Muslim world? 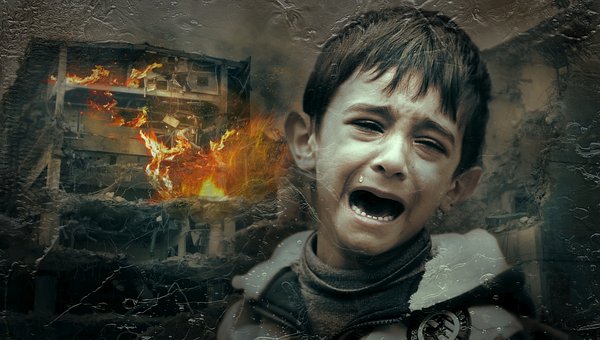 Why has Allah not defeated the perpetrators of evil?

“Had Allah willed it, He could have defeated them by Himself, but it is His test. He is testing you by the means of others. And for those who were killed for the sake of Allah, Allah will not let their good deeds go to waste. He will guide them and improve their state of mind and will admit them to Jannah, which he chose for them.” (47:4)

Why is there so much suffering?

In this Ayah we see a very quick answer for the situation of the Ummah today. Many questions have been asked, especially in the current situation, in Syria, in Yemen, in Myanmar, in Iraq, in Afghanistan… We have lost count, unfortunately. Some people might even pose this very question: Where is Allah in all of this? Why is He not defending those who are blessed? Why is He not defending those who are hopeless? Why is He not defending those who are vulnerable? The weak, the oppressed, the children, the civilians? And sometimes some people even go beyond the limit and question Allah’s wisdom, which is forbidden. So, Allah is answering these questions in a similar situation. He could have defeated the enemies by Himself, but He hasn’t. This isn’t Allah’s job. This is our job. You cannot do your children’s’ homework. That is cheating. It is the same in our daily situation in the dunya. We classify it as this. We cannot cheat. Allah allocated tasks for individuals. He allocated obligations for communities and commands for the ummah to follow. By not fulfilling these commands they will not pass the exam. Simple as that. If you are to support the cause of Allah, Allah will support you. Simple as that.

Principles vs Self interest

If we were just to moan about our situation support will not come. It is now the battle of principles vs. interests. Will we stick to our principles or our interests? It’s an ongoing test. Sayyidna Ibrahim was tested in that. Allah tested him by asking for his son Ismael’s heart.

What do we do? That is the test. The principle is to stick to the command of Allah. The interest is to keep his son.

Sayyidna Yusuf was tested as well. A beautiful woman tried to seduce him. The principle again is to stick to what Allah commanded.

She in whose house he was living tried to seduce him. She shut the doors, and said, “I am yours.” He said, “God forbid! He is my Lord. He has given me a good home. Sinners never succeed.” (12:23)

“Had We not given you stability, you might have inclined towards them a little.” (17:74)

Unless we stick to Allah’s commands, our ummah will be tested over an over again. Until we have the guts to stand up for what is right, as we were shown in the example of Sayyidna Ibrahim.

Children are being massacred, women, elderly – without mercy. All we have done is make du’a. Maybe some financial support. Half of it has probably been stolen. The international community has failed. Why? They stick to their interests, not principles. The principles are human rights. Because interests override principles, no one trusts principles any more. No one is interested in justice anymore. We aren’t supporting human rights, we are interested in boosting our economy – supporting weapons to oppressors because we have decided on Brexit. No one knows what is going on. We have decided to leave the EU and our economy goes down so to support it we support oppressors. We have lost our principles and what else? Common sense has been lost. I would say that nonsense is the new common sense. People are dying! Do something. We have five permanent members in the security council with the right to use their veto. No matter who dies or is massacred, we have a veto. I would say these five members are evil, delivering injustice and failure.

The equation is clear. Allah could defeat the perpetrators of evil Himself, but this is our test to pass.

The command from Allah is to come together and cling to Allah and to stay undivided. This is how we will pass the exam. We are cutting each other off. We are going in the wrong direction. Unless we come together again we will never pass. Our unity is important. It is what makes us the ummah of the Qur’an. Forget colours, groups, nationalities. We are the ummah of the Qur’an. Unless we support each other and human rights, we will fail the test. I feel pity for the national community as well. We have lost hope on leaders in the Muslim world. We must renew our vows to Allah to answer His call and His commands and apply them and we can find our way out of these tests. The ummah is shaken. Allah is shaking us to wake us up. Where is the exit? We will never get out of this dilemma.

If we support Allah, He will support us.

Why should forgiveness be on the top of the list of your duas?