What are the etiquettes of visiting a mosque? 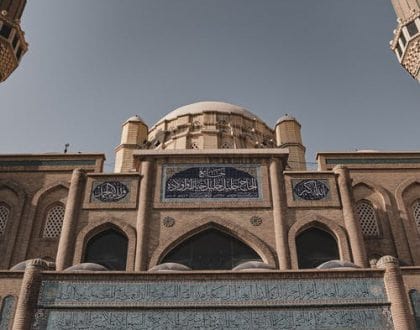 Mosques are sacred places. Abu Hurayra reported that the Messenger of Allah (peace be upon him) said:

We have been told to glorify Allah and all that He has made sacred. Imam Suyuti said that this verse from Surat Nur commands us to venerate mosques, keep them clean and free of idle chatter and all impurity:

“In houses (mosques) which Allah has ordered to be raised (to be cleaned, and to be honoured), in them His Name is remembered [i.e. Adhaan, Iqaamah, Salah (prayers), invocations, recitation of the Quran]. Therein glorify Him (Allah) in the mornings and in the afternoons or the evenings,

Men whom neither trade nor sale (business) diverts from the remembrance of Allah (with heart and tongue) nor from performing As-Salaah (Iqaamat-as-Salaah) nor from giving the Zakah. They fear a Day when hearts and eyes will be overturned (out of the horror of the torment of the Day of Resurrection)” [24:36-37]

In another verse, Allah says in Surat Hajj:

When visiting a mosque one should remember they are a guest of Allah and should behave in the best way, which is the prophetic way. Tabarani said:

“[The one who goes to the masjid] is the guest of Allah.” (Tabarani)

Therefore when heading for the masjid, one should be mindful of this fact, as well as physically prepared for this visit.

Make wudu. The Prophet (peace be upon him) said:

“Whoever performs wudu’ (ablution) in the best manner, then leaves to the masjid, then (know) that he is a guest of Allah, and it is incumbent on the guest to honour his host.” (Tabarani)

“He who purifies (performs wudu’) himself in his house and then walks to one of the houses of Allah for performing an obligatory prayer, one step of his will wipe out his sins and another step will elevate his rank (in Paradise).” (Muslim)

“O Children of Adam! Wear your beautiful apparel at every time and place of prayer.” (7:31)

This means dressing nicely as well as having good personal hygiene, especially as praying involves being in close proximity to others, so one should take care they pleasant. The dress is applicable to men and women and one should take care that one does not have inappropriate slogans on their clothes.  Clothes should not be tight or figure-hugging, or smell of sweat or food.

Do not park badly or block anyone. This will not only cause issues for those who are blocked but create a negative impression of Islam. The Prophet (peace be upon him) taught us to be thoughtful and considerate of others. Parking badly is not an option.

Make dua and enter the mosque with your right foot

Abu Usaid said that the Prophet (peace be upon him) said:

When one of you enters the mosque he should say: “Oh Allah! Open for me the doors of your mercy.” [Abu Dawoud]

Anas bin Malik (may Allah be pleased with him) said:

“It is from the sunnah (Prophetic tradition) that we enter the masjid with our right foot and leave with our left foot.” (Hakim)

“When one of you enters the mosque, then he should not sit until he has prayed two rakahs.” (Agreed upon)

Praying two rakahs (Tahiyyat al-Masjid) when entering the mosque and before sitting down is recommended, but not obligatory.

This can be prayed when you enter any mosque, and also if you enter a prayer room which is not a mosque, though it is more emphasised in a mosque than a prayer space where no congregational prayer or khutbah is held.

You can recite the two rakahs again if you leave the mosque and re-enter it, if you wish.

It is not necessary to recite the 2 rakahs if the iqamah is being given, as you should join the congregation for salah.

If you enter a masjid after Fajr or after Asr, it is permitted to pray the 2 rakahs of Tahiyyat al-masjid. The Imam ‘Abdul-ʿAziz Ibn Baz said in response to this questions that to pray it preferable because the Sunnah is that the one who enters the mosque is to pray two rakahs — even in the Time of Forbiddance before the [entrance of the time of] Maghrib, or before the sun has fully risen. There is no harm in this, due to the saying of the Prophet (peace be upon him):

The conditions of prayer is purity of one’s person, one’s clothes and one’s place of worship. Therefore it is important to keep the mosque clean and to dirty it. The Prophet (peace be upon him) ordered that mosques be built in residential areas and that they be cleaned and perfumed. (ibn Hibban). Do not spit inside the mosque or on its stairs.

Reward of praying in a masjid

Praying in the masjid carries a great deal of reward, above praying at home. Abu Hurayrah narrated that the Prophet (peace be on him) said:

“The prayer offered in congregation is twenty five times more superior (in reward) to the prayer offered alone in one’s house or in a business centre, because if one performs ablution and does it perfectly, and then proceeds to the mosque with the sole intention of praying, then for each step which he takes towards the mosque, Allah upgrades him a degree in reward and (forgives) crosses out one sin till he enters the mosque.

When he enters the mosque he is considered in prayer as long as he is waiting for the prayer and the angels keep on asking for Allah’s forgiveness for him and they keep on saying: ‘O Allah! Be Merciful to him, O Allah! Forgive him, as long as he keeps on sitting at his praying place and does not pass wind. [Bukhari]

In addition, by visiting the mosque, one builds familiarity, friendships and becomes more aware of what is going on in the community, which creates a network of support. It breaks down social barriers and enables people within the community whose paths do not ordinarily cross to see each other.

Do not disturb others and put your phone on silent

The Companions did not like to raise their voices in the masjid. A mosque is a place of worship so one should not disturb those who are praying and enable them to focus and concentrate on their prayer without creating a distraction or nuisance. Abu Sa’id al-Kudhri (may Allah be pleased with him) reported that the Prophet was in seclusion (etikaf) in the mosque and he heard people reciting aloud, so he removed the covering and said:

“Verily, each of you is in a private conversation with his Lord so you should not disturb each other. And you are not to raise your voices against each other in the recitation.” [Abu Dawud]

If somebody is praying, you should not pass in front of him – of course you can do so if you pass a little away from the place of his prostration.

Those who come late should not jump over the heads of others to go to the front lines.

When the Imam is delivering the khutbah, do not talk, and do not use your phone. Phones should be switched off or put on silent especially during the salah.

If one is not performing prayer, or listening to the khutbah, they should be engaged in the remembrance of Allah through dhikr, talking Him and the deen, and should not be engaged in gossip. Do not engage yourself in buying or selling things in the mosque nor should you talk of trade there.

Dua when leaving the mosque

When exiting the mosque, recite:

With the Name of Allah, and may Allah exalt the mention of the Messenger of Allah. Oh Allah, I ask for Your Bounty, Oh Allah protect me from Satan, the outcast.

Exit with your left foot.