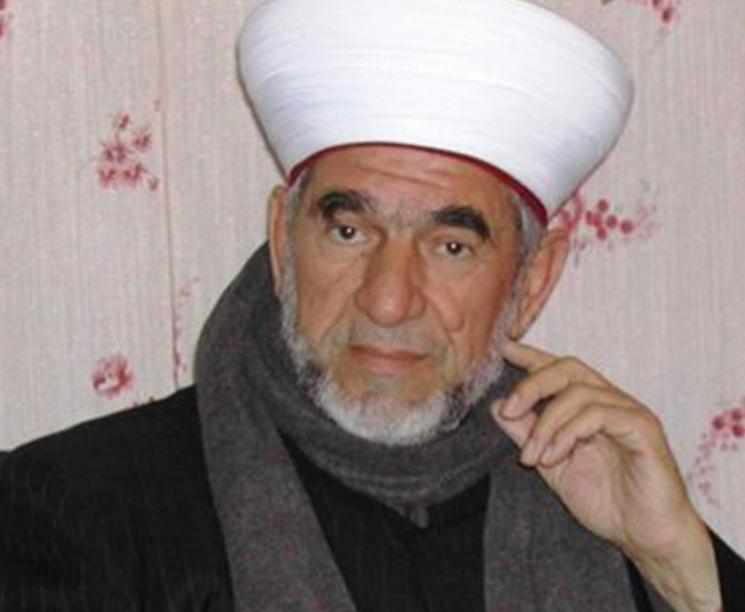 The loss of a dear scholar

I heard Allah’s Messenger (peace be on him) saying:

“Allah does not take away the knowledge, by taking it away from (the hearts of) the people, but takes it away by the death of the religious learned men till when none of the (religious learned men) remains, people will take as their leaders ignorant persons who when consulted will give their verdict without knowledge. So they will go astray and will lead the people astray.” (Bukhari and Muslim)

It is with sadness that we have lost a great scholar, our late Shaykh Khalil al Mays rahimahullah who passed away yesterday at the age of 80.

He was undoubtedly a great scholar, an accomplished jurist and one of the country’s top Muslim scholars as well as the mufti of Zahle and the Bekaa region of Lebanon since 1985.

After obtaining his Shariah secondary certificate, he studied at Al-Azhar Al-Sharif in Egypt where he obtained a master’s degree in comparative jurisprudence in 1967. On his return to Lebanon, he took over the administration of Azhar Lebanon from 1969 until 2009.

He promoted moderation and tolerance, and dealt with many urgent issues in the Islamic community, for which he gave special fatwas, and he was an important contributor to the intellectual and cultural development of the Arab and Islamic world.

He is a very special man, a giant in ilm (knowledge), who, with his funny, bubbly character loved everyone and was loved by everyone.

His warm sense of humour, good character and deep understanding of the text was an inspiration to me. Indeed he was the first inspiration in my life.

I was fortunate to know our late shaykh from a young age. I was just a teenager when I started attending his circle on usul al fiqh, which I had no clue about. The first thing that you noticed about him was that he always had a cheerful face.

This cheerfulness was coupled with his vast knowledge, and his love of books and learning which was infectious. His special style of delivery and jokes made even the most complicated topics appealing. You could not but help becoming passionate about the concepts which interested him and his mind was always whizzing with ideas and what he had just read, as he was a prolific reader. He was always recommending books and authors to us and sharing his ideas.

I remember that when we used to attend his class, he had a penalty system for late-comers, who would have to pay 50p or £1 depending how late they arrived. With that money the Shaykh would buy books for the library and instill the value of being punctual in a nice way.

Despite being the giant Shaykh of Al Azhar, he was humble and down to earth, and we were delighted when he attended the little party we had to celebrate finishing our baccalaureate when we turned 17, with a cake and some nasheeds.

He inspired those around him, and it is from him that I gained the love of books, knowledge and manuscripts.

In the 1990s, I was working on a manuscript Fathu babil Inayah Sharh an-Nuqayah by Mulla Ali Al-Qari and we told Shaykh what we were working on it. He was very excited and told us to finish this project so that he could teach it in Al Azhar. We worked on the book for three years and we were honoured that he wrote the introduction to it and then, he was true to his word and the book became part of the Fiqh curriculum and was to students over three4 years because it was so big.

Shaykh Khalil was characterised by his sincerity (ikhlas) which was evident in everything he undertook, along with his determination (himma), and energy. Always brimming with ideas, he went on to execute many of them, including building the biggest Islamic institute in Lebanon Azhar al Bekaa which comprised 14 buildings and 14 institutions from college to university, Tahfeedh al Quran institute, idhatul Quran (radio for Quran), as well as a school for boys and for girls, a special zakat collection, and institutions for looking after the health of poor and needy.

He was a top thinker, philosopher, usuli and faqih who cared about the ummah and his friends and students and looked after their well-being. He was well known and well respected by Muslims and non-Muslims alike, who invited him to their events.

His father had been a farmer and when he would go to villages, he could speak their language and converse in their slang with their accent, so they felt at ease and could understand what he wanted to convey.

He had been born in a village called Maksah in Bekaa’, Lebanon where they had nothing but fields and cows so there was not much scope for education, so his father sent him to al Azhar in Lebanon, which is linked to Al Azhar in Egypt and has visiting teachers from Egypt, as well as Lebanese teachers. He used to return home during the holidays and described how he would be holding his book in one hand and the reins of his mule in the other. He was so dedicated. And he had a friend who left Lebanon and migrated to do business and he made a fortune. He was the wealthiest in the village, with a castle, big farm and swimming pool and one day he invited Shaykh Khalil who was the shaykh of the area, and had also become the Mufti of the county, Bekaa.

The friend held a huge feast and he invited everyone in the village, with Shaykh Khalil as his honorary guest. At the end of the meal, he asked the Shaykh to say a few words. Shaykh Khalil was very eloquent. Whenever he spoke, he would take you to a different planet. Mashallah he was also so humble he would sit on the floor and feed you from his own hands, even though he is a mountain of knowledge. When he finished his speech, his friend got up and said that though he had made a fortune, he wished he could donate all his wealth to have a fraction of the knowledge the Shaykh had. This is a true story. Truly, Allah honours the people of knowledge when they are sincere.

He spread goodness and was very open minded and had a knack for bringing people together, reconciling hearts and minds and resolving conflicts. He could undertake impossible missions. If there is something complicated, he would find a solution. People approached him all the time for help, and whether it was in his area or outside, he was willing to sacrifice his own rest and money, far beyond others’ capacity. No wonder whenever he travelled, no one could fill his shoes.

When I left for London, I visited him and asked him for some naseeha (advice). I remember the scene vividly and it stayed in my memory, as he said, ‘Go, you will come back and give us some advice.’ I had no idea what this might mean but I arrived in the UK and a short while later established Utrujj and discovered how to give powerpoint presentations. This was new technology at the time which was not well known in the Arab world. When I returned to Beirut, I showed the Shaykh some of my presentations and he was so thrilled. He called a gathering of all the classes at Al Bekaa in the big hall, so that I could show them how to use powerpoint in teaching fiqh. The hall was overflowing and I took the podium with my laptop and projector and set it all up and introduced it to them, with the Shaykh sitting in the audience like a rapt student. He urged the students to learn this new technology and use it and I said to the Shaykh afterwards that his words had come true, and that as he had said I had come back to give them advice. He smiled, and I knew that he certainly had firasa , the God-given ability to see things others do not.

Among his positions, Shaykh Khalil also represented Lebanon in the Islamic Fiqh Academy in Makkah, affiliated to the Organization of the Islamic Conference, as well was a member of the community of Sharia scholars in the United States.

He was awarded the National Cedar Medal  for contribution to Islamic-Christian dialogue, the consolidation of coexistence and the convergence of views between the Lebanese of different sects.

With his death we have lost a giant, a mountain, a great scholar.

We ask Allah to enable us to continue what he started and deliver the message of goodness and open-mindedness which he was delivering.

May Allah accept him and elevate his status and make him among the prophets and the siddiqeen.

Sacrifices of the Knowledge Seekers

The boy who sold his father’s mule for a book