How It Feels To Be a Muslim In a Hostile World 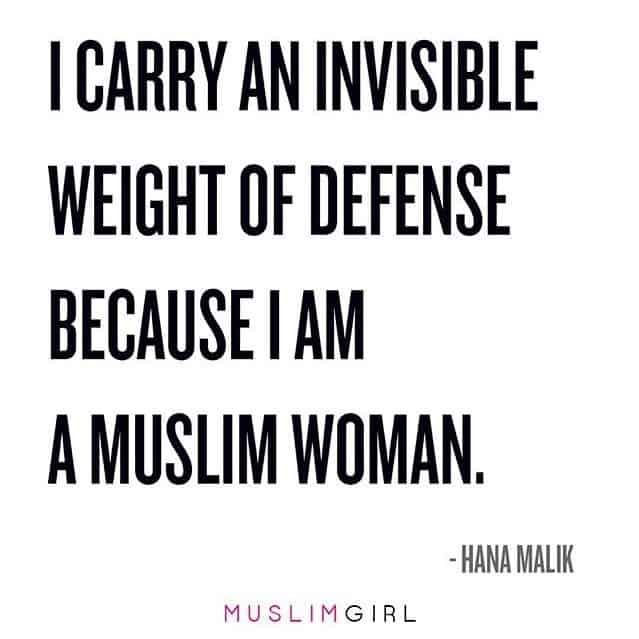 Out of all the thirty-some Muslim assemblies I’ve delivered over the years, this is without a doubt the most difficult – certainly the most personal – one I’ve ever written. It took me weeks to sit down and get it out; in fact I had to abandon my first attempt because I was reduced to tears, and couldn’t continue. It’s less of an opinion and more of a feeling I’m trying to verbalise, so if it’s totally incoherent I apologise.

I want to start with a poem.

The first time I saw this poem I genuinely cried – clearly I’ve been crying a lot lately – because I relate to it so incredibly much. It articulately conveys feelings which I have struggled with for a long time, but never fully been able to express. By now, I’ve watched it tens of times, and the main feeling I get every time is an overwhelming need to share it with everyone I know. So, here I am. The poem is titled ‘This is Not a Humanising Poem’, and it’s by Suhaiymah Manzoor-Khan, whose Ted talk on how stereotyping Muslim women disadvantages everyone I highly recommend, by the way, for anyone who’s interested.

So, there’s one particular line I want to draw your attention to: ‘Love us when we aren’t athletes, when we don’t bake cakes’. The cake is an obvious reference to Nadiya Hussain, winner of the Great British Bake Off in 2015, but it only takes a quick glance at her twitter page to see how even that isn’t enough for many people when it comes to love and acceptance. All the tweets on the screen were posted within a week of each other, and I think it’s significant to note that the reason I could only find mostly her own responses is because many of the tweets aimed at her are so offensive that they are subsequently deleted by the platform – particularly significant when you consider how much criticism Twitter receives for not dealing adequately with the majority of hate speech.

Going back to the poem, though, the athletes. I assume this was originally meant to refer to Sir Mohamed Farah, the most successful ever British track athlete, holder of ten World and Olympic medals. But recently it’s brought to mind someone else. A lot of you have probably already seen this video, which went viral in February, of Liverpool football fans chanting their support of Mohamed Salah, a Muslim player dubbed ‘The Egyptian King’ by supporters, who just last week was awarded Player of the Year by the Professional Footballers’ Association

We laughed about this, in my house, but actually it was deeply validating to see people – more specifically a predominantly white, male, notoriously prejudiced and probably fairly intoxicated crowd – chanting something positive about Muslims and mosques.

The thing is, would they still, as Manzoor-Khan says, love him if he weren’t an athlete? This crowd’s acceptance of Islam is predicated on whether Salah ‘scores another few’. They like him because he’s doing well, but would they be as positive if he hadn’t scored thirty goals in his first season with the club? And what about the rest of the country’s Muslims?

Sadly, many Muslims in Britain aren’t shown the same love as Salah. In fact, many of them aren’t even considered British. In January of 2017, BBC 2 aired ‘Muslims Like Us’, a Big-Brother-style reality TV show which put ten Muslims in a house together and filmed their interactions. I didn’t watch it myself, and have no wish to, based on what I’ve heard and the clips I have seen (though if any of you did, I’d be interested to hear what you thought), but regardless of the execution, just the title alone is problematic. The stock insult generally thrown at Muslims, and people of colour more generally, is some variation on ‘go back to where you belong’, the implication of course that we don’t belong in Britain. And with a title like ‘Muslims Like Us’ isn’t that really saying that most Muslims aren’t like us (whoever ‘us’ might be); that most Muslims are fundamentally different to British people; that they don’t hold the same ‘British values’ that we hear so much about?

But the humanising poem, the one which says, ‘we Muslims are just like you’, that’s only half of Manzoor-Khan’s poem. She also says that she won’t let that poem force her to write it, that it isn’t ‘the poem she wants to write’ but ‘the one she has been reduced to’. So why? Why is it that she feels an obligation to write this poem at all?

At the White House Correspondents Dinner last year, comedian Hasan Minhaj made a joke comparing the press to a minority group. I was going to read it you, but my lack of comedic ability wouldn’t do it justice, so here it is:

He said it to be funny, and he was, but he wasn’t exaggerating. This is something I saw, and subsequently shared, on Instagram. 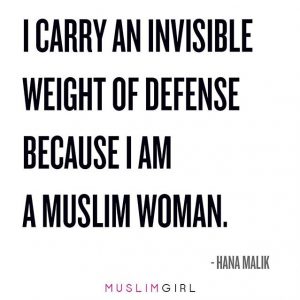 As someone who’s posted all of two things, I think it’s telling that it touched me enough for me to actually repost. The thing about being a visibly Muslim woman is that you wear your faith very obviously to the rest of the world. What with all the negative coverage of Muslims in the media, there’s a huge burden on these women to present an alternative view of Islam – one that’s moderate, and commonsensical, and doesn’t interfere with life as the West would like us to lead it.

The thing is, this feeling isn’t unique to Muslims. I got a lot of the same feelings when reading Hidden Figures, which I know most of you didn’t read but which I related deeply to on a lot of levels. Again, there was one line which stood out to me particularly:

“Katherine [Goble] understood that the attitudes of the hard-line racists were beyond her control. Against ignorance, she and others like her mounted a day-in, day-out charm offensive: impeccably dressed, well-spoken, patriotic, and upright, they were racial synecdoches, keenly aware that the interactions that individual blacks had with whites could have implications for the entire black community.”

A synecdoche is ‘a figure of speech in which a part is made to represent the whole’. And Margot Lee Shetterly’s description of the feeling that these women had – that they represented the whole black community in the eyes of their co-workers – describes perfectly the feeling that I have every moment of every day.

I spend my life striving to be perfect. To attempt to dress presentably, no matter how tired I am; to always be polite, no matter how annoyed or upset I am; to follow rules, and work hard, and smile. Not just because these are good things to be, though of course they are, but because I’m terrified that the people around me will see my headscarf and judge the entire world’s Muslim population based on my actions. Of course, I’m only human and it’s inevitable that I regularly fail at this. But it’s a huge weight to carry nevertheless, and it consumes my every speech and action. And of course I can’t speak for all Muslims – that’s the whole point of this! – but I’m sure I’m not alone in this feeling.

In fact, I know for certain I’m not. After I first wrote this assembly, I sent it to a friend who also wears a headscarf, and I want to read you a bit of her response. She said:

“Forget western ideals of a perfect woman (well educated, attractive, stunning career) it’s like we’ve also got to be modest and compassionate and volunteer in our spare time to save baby dolphins, lest the world thinks we don’t care about all aquatic life forms. We’ve got to make the most of our privileged educations and be high achievers and go conquer Oxbridge because our grandparents or great grandparents might not have had those chances. Fair enough, but add the weight of representing a faith of 1.8 billion people and it becomes a bit absurd.”

So, this feeling isn’t just a manifestation of my own insecurities. And just imagine the burden on public figures, like Nadiya? She’s said herself, in response to people who tell her just to ignore the haters, that she’s ‘here to take one for the team’, but her goal was never to be an Islamic rights activist. She only went on TV to bake, yet she has been forced to make this her crusade – something she never asked for and which does not influence anyone in any positive way. And if Mo Salah were to be disgraced, in any of the myriad ways celebrities often are – what might the fans be chanting about Muslims then?

So, what I’m really asking with this assembly is for you all to remember two things. One, be aware of your own preconceptions, and remember that we’re all only human. When you hear a headline, or witness someone doing something less than perfect, remember that the actions of one do not represent the ideas of many, and try to cast judgement only on individuals, (if at all), without projecting their mistakes onto their entire group.

And two: no group of people should have to justify their existence. Normal people have just as much a right to be here as those who excel, and everyone’s individual experience is valid and acceptable. Suhaiymah Manzoor-Khan said it better than I ever could: ‘if you need me to prove my humanity, I’m not the one who’s not human.’