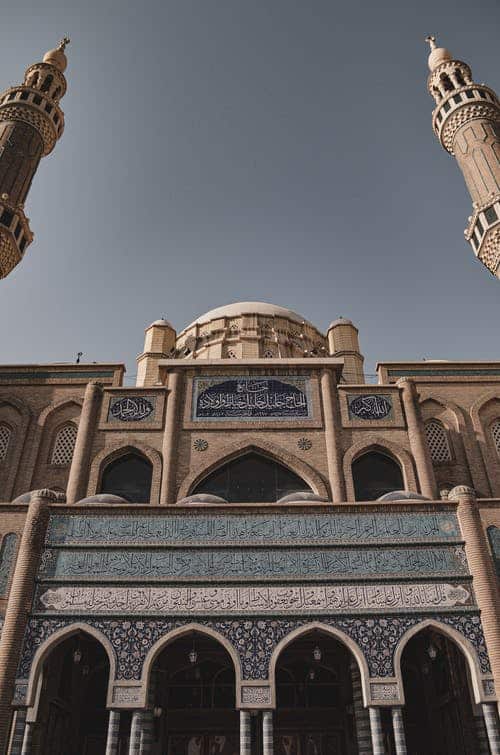 Todays reminder is about unity and not returning to the habits of pre-Islamic (Jahiliyya) times. In Surat al Imran, Allah Almighty says:

And hold firmly to the rope of Allah, all together, and be not divided. And remember Allah’s favor upon you; when you were enemies, and He united your hearts, and by His grace you became brethren. And you were on the brink of a fiery pit, and He saved you from it. Thus Allah clarifies his revelations to you, so you may be guided. (3:103)

O you who believe, obey Allah and obey the Messenger and those in authority among you. Then, if you quarrel about something, revert it back to Allah and the Messenger, if you believe in Allah and the Last Day. That is good, and the best at the end. (4:59)

It would take a full course to address the issue of Karbala in detail which I will do in the future inshallah.

Husayn is from me and I am from Husayn. Allah loves whoever loves Husayn. (Tirmidhi)

They are my two sweet flowers in the world. (Bukhari)

In another authentic narration he (peace be upon said):

Al Hasan and Al Husayn are the leaders of the youth in Paradise. (Tirmidhi)

Leaving aside the weak and fabricated narrations, there are numerous authentic, top level narrations in the same vein about the virtues of Hasan and Husayn.

The tragedy which took place on 10th Muharram AH (680 CE), in Karbala, in Iraq coincides with many other historic occasions that have been marked on that day, such as fasting to commemorate the liberation of Musa (peace be on him) and his Ummah, Bani Israel from Firaun. We celebrate of the freedom of the Jewish people, as my Jewish friend calls it. I like this way of putting it and I hope that one day they will celebrate the liberation of the Palestinians and give them relief from the oppression they are enduring in Gaza and the West Bank.

To cut a long story short, Al Husayn went to Iraq to get support to fight oppression and the main reason for his opposition to Yazid, the Caliph at that time was because Yazid was not following prophetic guidance and he was not holding a shurah (consultation) to choose the imaam for the Ummah. We do not have the concept of inheriting positions of authority by birth in Islam.

Al Husayn wanted to cling to the prophetic way and revive the prophetic way. Although when we read the details of the saga, we see that many Companions, such as Ibn ‘Abbas advised him not to go because his father and brother had already experienced a lack of support from the people of Iraq. Nevertheless destiny would unfold as it had been written.

How do believers deal with calamity?

As stated earlier, our reference across the world as Muslims is the Quran and the Sunnah in good times and when we face trials and tribulations. As Allah stated, and consequently our reaction to death (no matter what the circumstances surrounding it) is always to accept it and say:

Those who, when a calamity afflicts them, say, “To God we belong, and to Him we will return.”

Moreover, being disunited is the not allowed in Islam. The Prophet (peace be on him), as narrated by ibn Umar (may Allah be pleased with him) said:

“Beware! Do not revert to disbelievers after my death by striking (cutting) the necks of one another.” (Bukhari and Muslim)

Grief is not a licence to revert to Jahiliyya practices

Abdullah bin Mas’oud (may Allah be pleased with him) narrated that the Prophet (peace be on him) said:

“He who slaps his cheeks, tears his clothes and and calls the calls of the Jahiliyyah : follows the ways and traditions of the Days of Ignorance is not one of us.” (Bukhari and Muslim)

He made it clear that we cannot go back to the practices of Jahiliyya, which the revelation saved us from.

When the Prophet (peace be on him) went to bury his son, he was carrying him in his arms and crying. Abdur Rahman bin Awf was surprised and asked him why he was crying, so he clarified that he had not been commanded to refrain from crying, but from wailing and screaming and showing undignified displays of grief which was the tradition and custom of that time.

“The Prophet took Abdur-Rahman bin Awf by the hand and went with him to his son Ibrahim. He found him in his last breaths, so he took him and put him on his lap and cried. Abdur-Rahman said to him: ‘You cry? Didn’t you prohibit (your followers) from crying?’ He said: ‘No. But I prohibited two foolish immoral voices: A voice during a calamity while clawing at one’s face and tearing one’s clothes, and Shaytan’s scream.'” (Tirmidhi)

In another narration, A’isha reported God’s Messenger (peace be on him) as saying:

“If anyone introduces into this affair of ours (our deen) anything which does not belong to it, it is rejected.” (Bukhari and Muslim)

Abdullah bin ’Amr bin al-’Aas (may Allah be pleased with them) narrated that the Messenger of Allah (peace be upon him) said:

“None of you [truly] believes until his desires are subservient to that (Shariah) which I have brought.” (Imam an-Nawawi)

These narrations show that the Prophet (peace be on him) was keen that the Ummah has to come together and stick to the Quran and follow the guidance of Allah Almighty and His Messenger.

Yes, the events at Karbala were undoubtedly painful for our Ummah and the martyrdom of Al Husayn was tragic, however we should not act in a way that is outside the Shariah.

The main reason for the revolution of Al Husayn was to unite the Ummah and bring them all on the path of the Prophet Muhammad (peace be on him) and to appoint a leader who is spreading justice.

We should be following the same concept which is the prophetic concept of protecting the oppressed against their oppressors and doing our best to cling to the prophetic way and prophetic guidance, which is what Al Husayn was doing.

May Allah enable us to always follow the Quran and Sunnah and defend the oppressed and fight oppression and corruption. Ameen