The Blessing of Reciting the Quran with a Beautiful Voice 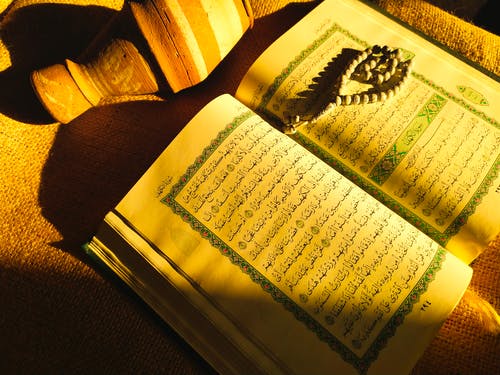 The Prophet (peace be on him) encouraged his companions to recite the Quran in a beautiful voice.

“Beautify the Quran with your voices.” (Ahmad, Abu Dawud, Ibn Majah and Darimi)

The word Quran here means the recitation of the Quran.

There are several incidents in the seerah, when the Prophet (peace be on him) asked companions to recite as he enjoyed hearing the words of Quran recited. One such incident is when he praised Abu Musa Al Ashari’s recitation, drawing a parallel between his melodious voice with that of Dawood (peace be on him) who was renowned for his enchanting voice.

Abu Musa Al-Ash’ari (may Allah be pleased with him) reported that the Messenger of Allah (peace be on him) said to him:

“You have been given a Mizmar (sweet melodious voice) out of the Mazamir of Prophet Dawud (David).” (Bukhari and Muslim)

Abu Burda narrated on the authority of Abu Musa that the Messenger of Allah (peace be on him) had said to Abu Musa:

If you were to see me, as I was listening to your recitation (of the Quran) yester-night (you would have felt delighted). You are in fact endowed with a sweet voice like that of David himself. (Muslim)

One cannot beautify one’s voice until one masters the basics. Reciting the Quran with no knowledge about the articulation of the letters and the rulings is wrong. Hence Ibn Jazri said:

First learn the pronunciation and then improve your recitation further.

The benefits of good recitation

I would like to share with you, when you beautify your voice, based on the correct tajweed rulings the virtues are beyond your imagination.

The Ansari companion, Usaid bin Hudair, was among the first people to accept Islam, after he was introduced to it by Musab bin Umair, the first ambassador of Islam in Madinah, and well known as Al Qari.

Usaid bin Hudair went to Makkah to make bayya (swear an oath of allegiance) to the Prophet (peace be on him). There is a very famous narration in Bukhari and Muslim about him. He had a sweet voice and was very attached to the Quran.

The Story of Usaid bin Hudair

Abu Sa’id al-Khudri told of Usaid bin Hudair saying that one night when he was reciting Surat al-Baqarah with his mare tied beside him it moved round in a circle, so he stopped reciting and it stopped moving.

He replied, “I was afraid, Messenger of God, that it might trample on Yahya who was near it, so I went to him, and when I raised my head to the sky and saw something like a canopy with what seemed to be lamps in it, I went out but could not see them.”

He asked whether he knew what that was, and when he replied that he did not, he said, “Those were the angels who had drawn near to listen to your voice, and if you had continued reciting the people would have looked at them in the morning and they would not have concealed themselves from them.” (Bukhari)[i]

Make a plan to improve your recitation

We need to work on our recitation. Ramadan is close. Let’s make a plan and lean tajweed and improve our recitation, and build up our level by learning the basics, consolidating them and then mastering them, until we perfected it, inshallah.

We ask Allah to enable us to be among those who have been given a beautiful voice and good recitation of the Quran and we can apply it in our lives. Ameen.

Shaykh Haytham Tamim – Thought for the Week on 19th  February 2020

[i] Also narrated in Muslim, with the wording “They went up into the air” instead of “I went out.”