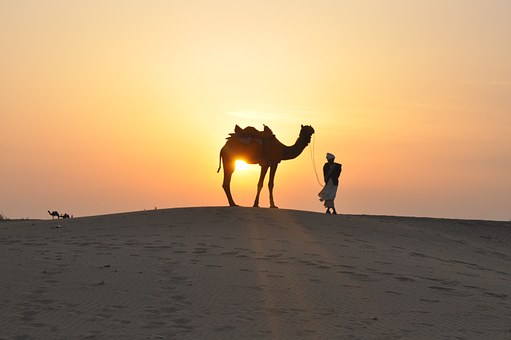 Inspiration from the Hijra 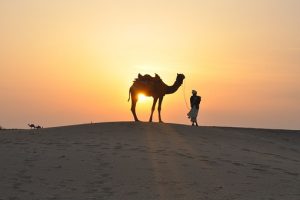 If you do not help him, God has already helped him, when those who disbelieved expelled him, and he was the second of two in the cave. He said to his friend, ‘Do not worry, God is with us.’ And God made His tranquility descend upon him, and supported him with forces you did not see, and made the word of those who disbelieved the lowest, while the Word of God is the Highest. God is Mighty and Wise. (9:40)

This ayah refers to the story of the Hijra (migration), when the Prophet (peace be on him) migrated from Makkah to Madinah after delivering the word of Allah Almighty day and night for 13 years since he had received it for the first time at the age of 40.

He was opposed by the social media of the time – through their poetry and name calling, and maligned as a magician, madman, poet. Yet he persisted. Perseverance was characteristic of him. He continued his mission regardless of the opposition, and relied on Allah Almighty even though only around 114 people had converted in all those years.

Two years before the migration a delegation from Madinah came to perform Hajj and the Prophet (peace be on him) introduced them to the message of Islam is a place called Al-‘Aqabah, and they accepted Islam and pledged their allegiance to him. The following year a larger delegation came and did the same. Then the Prophet (peace be on him) sought permission from Allah Almighty to migrate to Madinah.

His migration peace be upon him did not happen in Muharram; it happened towards the end of Safar and he arrived in Madinah on 12th Rabbi al Awwal, nevertheless it was a fresh start. And when Muslims needed to start their calendar during Umar’s time May Allah be pleased with him they chosen to start (as Bukhari narrated ) the year of Hijra and the beginning of the Arabic year is Muharram though the Hijra was in Safar-Rabi’ul awwal and so the beginning of the new Islamic year is a chance for us to reflect on the lessons of the Migration.

Makkah was the most beloved place to the Prophet’s (peace be on him) heart, and when he left Makkah, said:

‘By Allah you are the most beloved city to my heart, if they had not forced me to leave you, I would never have left you.’ (Tirmidhi and Ibn Majah)

However he sacrificed what he loved for what Allah loves. This is very important as sometimes we do the opposite but he left his home for good. He never came back to settle in Makkah.

The Prophet (peace be on him) did not say ‘I am Rasul Allah supported by Allah and the angels’, he prepared well in advance for his migration. He did not take the normal route from Makkah to Madinah, he took a completely different route. Though it normally takes ten days to travel, he took 14 days.

Once the Prophet (peace be on him) had exhausted all his efforts, the Prophet (peace be on him) relied on Allah Almighty. This is true reliance. Our reliance on Allah Almighty is often a substitute for hard work. Though we fail to revise or prepare properly we still expect that we will succeed because we assume this is relying on Allah. This is not tawakkul. It is laziness.

After he conquered Makkah, the people of Madinah thought it was a happy day for Islam but for them it was a sad day, as the Prophet (peace be on him) would remain in Makkah. However, he did not leave them, out of his loyalty to them. They had supported him when no one else had, and believed in him when he had been rejected.

When he distributed the booty among Quraysh then Al-Ansar were sad.

When it was the day of the Conquest (of Makkah) Allah’s Messenger (ﷺ) distributed the war booty amongst the people of Quraysh which caused the Ansar to become angry. So the Prophet (ﷺ) said, “Won’t you be pleased that the people take the worldly things and you take Allah’s Messenger (ﷺ) with you? “They said, “Yes.” The Prophet (ﷺ) said, “If the people took their way through a valley or mountain pass, I would take my way through the Ansar’s valley or mountain pass.” (Bukhari)

His blessed company was worth more than booty.

Loyalty is a rare commodity now. We rarely find people who are loyal. But we need to learn this from the Prophet (peace be on him). Be loyal.

Of course we have other lessons in Muharram, as we have Karbala and Hussain (may Allah be pleased with him) was martyred. We learn from his story that he fought against the oppression of a tyrant, and we need to learn this in our community. We are a cowardly community sometimes, who stay quiet and do not raise our heads above the parapet. But we need to stand up and defend the truth.

Recently a video clip went viral when a Sikh MP defended Muslim women and raised the issue of Islamaphobia. He is a courageous man, who is defending what is right and standing up for principles. We need to stand up for our rights and defend the oppressed people.

Karbala is a clear lesson that the grandson of the Prophet (peace be on him) learned from him to be a courageous person, to defend the truth and to stand up against those who are oppressors.

May Allah Almighty enable us to follow his footsteps peace be upon him, defend the truth and be among those who take a stand against oppressors.