Lies and Deceit…Signs of the Hour 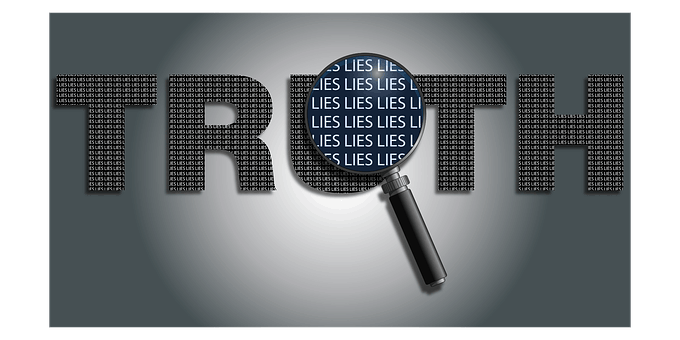 The Prophet (peace be on him) said,

‘Before the Hour comes, there will be years of deceit, in which a truthful person will be disbelieved and a liar will be believed; and the insignificant will have a say’. (Ahmad)*

The signs of the Day of Judgement are mentioned in countless verses in the Qur’an and in hadith.

The Prophet (peace be upon him) replied that the Hour (Day of Judgement) would be preceded by ‘Deceptive Years’ (sineena khad’a).

This is a very strange expression. He never it used before in any other narration. What did he mean by ‘years of deceit? How do we define a deceitful year?

When things are not as they seem.

Our reality is already somewhat deceptive, for example, time seems to be flying. We hardly begin a year, when the next year comes upon us. It seems like yesterday when we did something, but in fact, years might have gone by since it happened. Meanwhile the weather is just as duplicitous, as it might be summer but appears to be winter, or it might be autumn and it appears to be summer, and so on and so forth. Things are not as they seem.

Another deceptive aspect of our lives is money. On paper we may be earning a high amount, but in fact, when we come to spend it, it disappears. Running through our fingers like water. It is as if there is less barakah in our wealth than in the past, when a little used to go a long way.  We still have blessings from Allah Almighty but it is very common these days that we are spending more than we are earning. These are one of the signs which he (peace be on him) mentioned in the hadith, which is a sound narration.

Is it not the case? In our midst, we see plenty of truthful people telling the truth, but the media unfortunately distorts reality and misrepresents the facts, making the truth appear to be falsehood. This deceitfulness is one of the signs preceding the Day of Judgement.

Reality has been corrupted. It is not pure anymore. And people are affected by this constant perversion of the truth, so that their hearts and minds are misled by the accusations and the falsehoods from the media and society, impairing their judgement.

We are left with so much confusion, fake news, and conflicting information, we can no longer figure out who is telling the truth. Who is lying and who is not? People of trustworthiness are treated like cheaters and traitors, and the traitors are treated like trustworthy people. What on earth is going on? Changing the reality of things, changing the facts. To a huge extent people are being deluded and manipulated.

The Prophet (peace be upon him) is saying, that if you live to see this, it is one of the signs of the Day of Judgement. And then he said, (peace be upon him), that the ‘Ruwaydbah’ will deliver speeches. This expression was new to the Arabs, and they asked what it meant. The Prophet (peace be on him) explained that they would be sinful people who represent the general public. In many of our countries, and in many of our communities, we often find this kind of person is leading the way. Although he has no qualification to do so, (as he lacks the knowledge, the character, the charisma, and the religion or spirituality), he is representing the Muslim community, whether we like it or not – he’s speaking on our behalf. The representation of the communities and the cities and countries is not really reflecting the spirit of the Muslim community.

Am I wrong to say this is our reality today? I wish I was. But unfortunately, this is the case. I’m not a very pessimistic person; I am optimistic, but it is always good to see and hear the Prophet’s (peace be upon him) statements which describe our reality.

How to protect ourselves from deceit?

In this very narration the Prophet (peace be upon him) is teaching Muslims that before the Day of Judgement comes to you, be prepared. Preparation has to be internal and external. Internal preparation is between you and Allah Almighty. Have a sound heart; have your connection, your prayers, and your duties intact. And the external preparation, as a Muslim ummah, we have to come together. We have to love one another, we have to look after each other. Otherwise we will be eaten as if we are the meal for the wolves who have come for dinner. So, we have to be careful and act as one body, one community, one ummah, and this is actually what protects us and saves us from the deceitful years and deceitful people.

Despite the negative signs, we have very positive signs too. Alhamdolilah, we have many people coming back to Allah Almighty, finding their way back to Him. It might be that you are one of them. We have to acknowledge the fact that guidance is not in our hands. It is in Allah Almighty’s hands. But we can facilitate this guidance as much as possible and we ask Allah Almighty to protect us from al fitan (the trials) and the delusions and the deceitful years and make us amongst those who are following the truth with the Prophet (peace be upon him) Ameen.

We should teach our children how to read the reality and distinguish between what is right and what is wrong, the falsehood and the truth, the liars and the truthful people. We should be very clear that no matter what is happening around us we will be judged before Allah Almighty, and be responsible to speak the truth at all times. We have to be truthful, we have to tell the truth no matter what it takes, it is our duty towards Allah Almighty, towards His servants, towards our community as Muslims. We ask Allah Almighty to give us the ability to change our reality and make it a better reality, to change ourselves to be better Muslims. Ameen

*Abu Huraira reported: The Messenger of Allah, peace and blessings be upon him, said, ‘Years of treachery will come over people in which liars are believed and the truthful are denied, the deceitful are trusted and the trustworthy are considered traitors, and the al-Ruwaybaḍah will deliver speeches.’

It was said, ‘Who are the al-Ruwaybaḍah?’ The Prophet said, ‘Petty men with authority over the common people.’