Is it haram to draw people or hang photos? 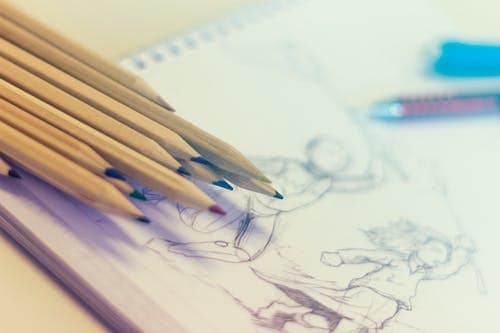 The hadith on pictures

‘Aishah (may Allah be pleased with him) reported that the Messenger of Allah (peace be on him) returned once from a journey, and saw a curtain which I had hung along a platform with some pictures on it. The colour of his face changed. He tore it up and said, “O ‘Aishah, the most tormented people on the Day of Resurrection are those who contend with Allah in terms of creation.” (Bukhari and Muslim)

This hadith relates to an incident where the Prophet (peace be on him) had a curtain with depictions on it taken down, cut into pieces which were then turned into cushions. The cloth was not thrown away, but used, in such a way that the pictures were not glorified. Based on this scholars have said that the issue is not making pictures but the significance placed on the pictures, having full length depictions and how they are displayed.

Can you draw humans and animals?

We have some discussion about the permissibility of drawing in general. Based on the hadith above, the main prohibition is drawing the full human body, as the Prophet (peace be on him) permitted the cushions which had part of the depictions on them.

If you draw half a human body, or just the face or animals that is fine. This is an area of disagreement among scholars, but there is an opinion that you may draw people and animals. It’s not a big deal.

There is no objection to pursuing art, painting and drawing as long as the images are void of anything prohibited such as nudity or nakedness (i.e. depicting the awrah – parts of body we have been commanded to conceal).

The reason behind the prohibition was to prevent people from sliding into idol worship. The pictures were a means to an end, which was shirk. This is how idol worship started. First they would made pictures of the prophets and then they made statues. Over time they worshipped them. But photos have nothing to do with worship.

Abdullah ibn ‘Umar (may Allah be pleased with him) reported that Allah’s Messenger (peace be on him) said:

There is a clear prohibition in Islam on statues.

The prohibition of photography by some scholars is based on al musawirun (the ones who make pictures), yudahuna khalq Allah – those who contend with the creation of Allah.

At that time, there were no cameras, when you asked a companion what a tasweer was, he would tell you it meant a painting.

The painting of a portrait challenges Allah’s creation and when asked they will not be able to blow a soul into it.

“It is a command to do that which one is unable to do. From it we get a description of how the punishment of the image-maker will be. He will be ordered to breathe the soul into the image which he has made and he will not be able to do so. As a result his punishment will continue (unceasingly).” [Fath ul-Bari, 10/398]

Photographs are not haram

There is no prohibition on photography.

In the modern context the tasweer is from surah (picture). Allah’s name is Al Mussawir The Shaper, which is similar in letters but different in meaning. Tasweer was painting. Today tasweer means something else. It is not recreating an image, it is capturing an image as it is. Capturing your image as Allah created it. It is not painting it. We are not challenging Allah’s creation by taking a photo.

The photo itself is not haram. Even if photos can be used in a haram way, that does not make them in themselves haram. Just as a knife is an object. It is not haram. But the use of it can be halal or haram. It depends on the intention.

Something cannot be called haram if there are differences of opinion on it.

It is a point of fiqh that something cannot be called ‘haram’ if there is a difference of opinion on the matter. As many shuyukh take the view photography is permitted, the shuyukh who think it is not permissible cannot pronounce it haram.

In order to pronounce something haram, you need clear authentic evidence – any hadith used in evidence has to have both a clear meaning and a sound source.

In the main hadith used in this debate, the source is authentic but the meaning is not agreed upon at all. There is an issue in the interpretation of the meaning of the hadith. As long as a matter has no agreed meaning, it becomes an issue of disagreement and it cannot be treated as haram.

Just as we have different schools of thought, pictures and photography are a matter of different opinions. Those opinions are valid opinions based on the same hadith, but have different understanding.

The majority of the scholars say there is nothing wrong with photos taken with the right limits. And it would be wrong to call say that anyone taking a photo is committing haram, as they have a valid understanding.

Are you allowed to hang up pictures of family and friends?

Don’t hang pictures in the direction of qiblah, so they are not directly in front of you when you pray.

Don’t hang up pictures with the full person. If you are going to display it, have just the face. Although this is disagreed on.

Don’t fill all your walls with photos.

If you are going to put up pictures, pictures of landscapes and nature are fine.

Can you wear clothes with images of creatures?

If your clothes have small creatures on your clothes, such as little birds and butterflies, you may wear them.