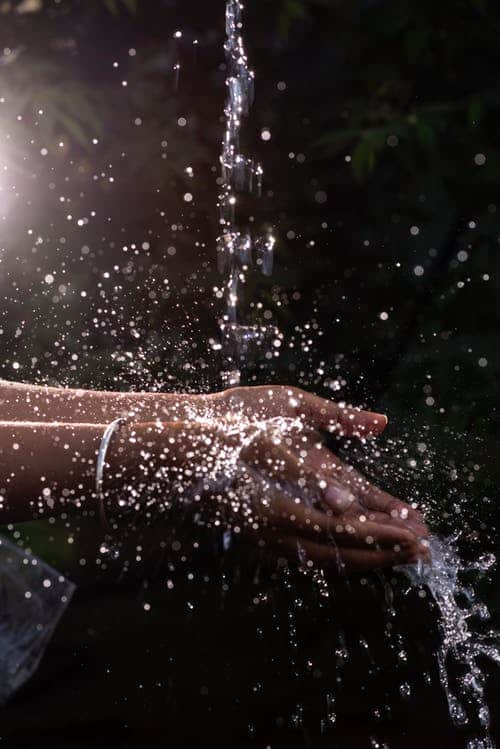 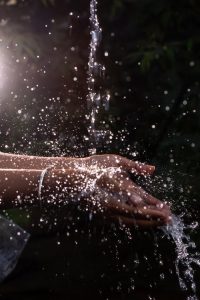 ‘If anyone performs wudu perfectly then says ‘ash-hadu an la illaha illallahu wahdahu la shareeka lahu  wa ash-hadu anna muhammadan ‘abduhu wa rasuluhu allahummaj’alni minat- tawabeen waj’alni minal-mutatahireen’ the 8 gates of jannah will be opened for him, he may enter by any of them he wishes’. (Tirmidhi)

We all know the first part of this du’a:

ash-hadu an la illaha illallahu wahdahu la shareeka lahu  wa ash-hadu anna muhammadan ‘abduhu wa rasuluhu, (I bear witness there is no God but Allah and Muhammad is His Servant and His Messenger).

In another version there is an extra bit to the dua:

The hadith is authentic and reported in different collections of the Sunnah including Sahih Muslim and Jami’ Tirmidhi.

Overall the Prophet ﷺ is saying if one does wudu perfectly, according to the sunnah, without missing any part or wasting too much water, and then one says these words, the 8 gates of Jannah will be opened and one may choose which gate to enter from. What a beautiful hadith!

Inward and outward dimensions of wudu

The hadith highlights the inward and outward dimensions of wudu. The outward is the physical cleansing (taharah). As Allah ﷻ stated :

The outward purity comes from wudu. But in addition we need inward wudu. Inward wudu comes from tawbah – the cleansing of the heart. In this hadith we see the two combined. When we cleanse our inward and outward aspects, we will be able to enter Jannah through any of the 8 gates.

How can we enter Jannah when we haven’t died yet?

The hadith states we can enter the gates of Jannah after the proper wudu. This means Allah ﷻ facilitates it for you to do good, so can be among those who enter Jannah through these doors. Ameen.

The gates of Jannah

The gates are named in different narrations. Though there are some variations between them, it is agreed that there are eight gates according to authentic narrations. The hadith means that those who qualify will be able to choose from the gates. Some of those mentioned are:

The gate of Salah

The gate of Sabr (patience)

The gate of Jihad

The gate of Obedience to your parents

The gate of Controlling your anger

The gate of Dhikr

The gate of Tawbah

The width of the gates of Jannah is so wide, huge beyond our imagination. One hadith mentions a distance like that between Makka and Hajar or Busra.

So it is very huge. The gates bear no comparison to any gate we have in dunya.

The Messenger of Allah (ﷺ) said: I will come to the gate of Paradise on the Day of Resurrection and would seek its opening. and the keeper would say: Who are you?

I would say: Muhammad.

He would then say: It is for you that I have been ordered, and not to open it for anyone before you. (Muslim)

The gates of Jannah are also opened at other times during the day, not just after wudu, but also at waqt-al-sahar, (an hour or half an hour before fajr) during the last third of night when dua is accepted, a most special time. And also on yawm-al-jumu’ah, and on many other occasions. So we should seize the opportunity and make use of this time to call to Allah ﷻ .

Purity of wudu is connected to purity of intention

The Prophet ﷺ is teaching us to perform wudu with god consciousness, and for Allah’s sake alone. If you remind yourself every time we do wudu that it is about purity of intention, and ask Allah ﷻ to make us among those who keep repenting, we are elevating our actions and reflecting the depth of our imaan (faith).

Wudu requires focus. As per the hadith:

He who performed ablution like my ablution of mine and offered two rak’ahs of prayer without allowing his thoughts to be distracted, all his previous sins would be expiated. (Bukhari and Muslim).

The moment we link our good actions to anyone other than Allah ﷻ they contain an element of hidden shirk. For example if we post our good deed on social media to impress others, our intention is not purely for the sake of Allah ﷻ. It may be that we have a good intention to encourage others to also do good, but this is a risky business. Our egos are always tempting us to show off.

If you want to encourage others, try and protect your intention, post on social media without putting yourself on centre stage. We need to keep our nafs under control, don’t allow it to compromise your ikhlaas (sincerity).

Repentance has to be continuous

Tawwaab is a verb form called seeghatul mubaalagha which means the uninterrupted repetition of an action in abundance. Therefore tawwaab is not just repenting occasionally or as a one off but continuously and insistently seeking repentance. At- Tawwaab  is also one of Allah’s names ﷻ, meaning the One who keeps accepting our repentance.

So the dua is saying:

Oh Allah make me among those who keep repenting.

We need continuous repentance because we keep sinning. This is why Allah Almighty says in Hadith Qudsi:

‘Oh my servants! You keep sinning during the day and during the night and I am the one who forgives all sins. So seek forgiveness from me and I will forgive you.’ (Muslim)

In another hadith the Prophet ﷺ said:

All the children of Adam are liable to do sins and make mistakes and the best of sinners (khataa-eena i.e. those who keeping sinning continuously in abundance) are those who keep repenting in abundance regularly (at-tawaaboona). (Tirmidhi and Ibn Majah)

Dhu al-Nun (245H) was asked about repentance and he said:

By repenting, we are balancing our bad deeds by continually cancelling them out. If sins are committed regularly and not balanced with tawbah, the balance will be tipped against us. But if tawbah is done regularly in abundance, it will balance the sins.

Have taqwa (fear) of Allah wherever you may be, and follow up a bad deed with a good deed which will wipe it out, and behave well towards the people. (Tirmidhi)

Try and make this the pattern, every time you do something wrong, rectify it by doing something good.  Not as a licence to do wrong and then right it, but to rectify it.

We should memorise this dua and remember to recite it with presence:

The fruit of this dua is the love of Allah ﷻ because He says in Surah Baqarah:

The Prophet ﷺ said when Allah loves a slave, calls out Jibril and says:

Imagine having your name called by Allah ﷻ and then being loved by all the inhabitants of Jannah. On earth Allah ﷻ will give you acceptance, so you will be loved by the people of Jannah and accepted by the people of earth. And any difficulty you encounter will be eased for you. You will still have difficulties but you will be supported by Allah ﷻ and his angels during the difficulty, and any door you knock on will be opened for you. This is Allah’s love (mahabbah). It is not something that can be explained in words, it has to be experienced and lived. Until you taste it you will not be able to understand it properly.

Can wudu’ really lead to a reward of such magnitude?

All of this comes from wudu? Yes! You are setting the tone for the day when you have ikhlaas, and you perform your wudu with these words and intention.

You start with mahabah and finish with mahabbah. And this is what we need actually.  We don’t need rigidity or robotic obedience. We need the love of Allah ﷻ.

So our relationship with Allah ﷻ it has to be injected more with love not with robotic responses to commands. Yes, we have to obey the commands but with love. When someone does their job and loves their job, the productivity is very different than if they are just doing the job because they have to. If it’s your passion, the results and rewards are very different.  Lucky is the one who does what he loves.

Delivered by Shaykh Haytham Tamim at the Watford Circle on 10th November 2019. Transcribed by Zahira Mohamed.

The Sunnah is more than a collection of sayings