How Suffering puts Belief under a Microscope 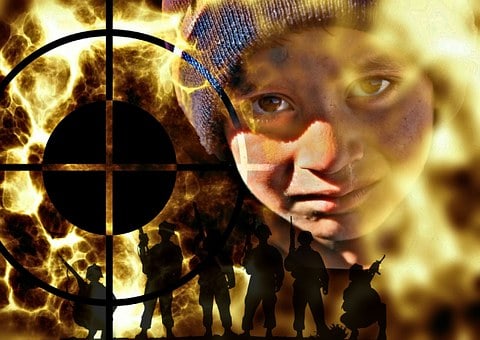 What Suffering Reveals about Us and the Ummah

O you who have believed, remember the favour of Allah upon you when armies came to [attack] you and We sent upon them a wind and armies [of angels] you did not see. And ever is Allah, of what you do, Seeing.

[Remember] when they came at you from above you and from below you, and when eyes shifted [in fear], and hearts reached the throats and you assumed about Allah [various] assumptions.

There the believers were tested and shaken with a severe shaking.

And [remember] when the hypocrites and those in whose hearts is disease said, ‘Allah and His Messenger did not promise us except delusion’ (33:9-12)

In these ayahs, we see the faith of believers rigorously tested and severely shaken. Allah Almighty is testing the quality of the believers, and the depth of their imaan.

This surah is referring to a particular incident, the Battle of the Trench or ghazwat al ahzab, when the Muslims were besieged in Madinah for thirty days by a coalition of forces, but protected themselves by digging a trench to save themselves from attack. Why is this relevant to our situation?

The beauty of the Qur’an is that it is an everlasting miracle, a book of guidance for all time. There are similarities between the onslaught the Muslims faced then, and what we face today. There are forces surrounding believers attacking them from above them, from below them, right, left and centre. And at that time the coalition forces were around 10-12,000 outnumbering the believers in Madinah who were only 3,000. Yet Allah Almighty protected believers by sending winds against the enemy troops, and by sending the angels, protecting believers because of their faith and trust in Allah Almighty, their truthfulness, and their firmness.

Victory has never been about the size of the armies. At the first battle in Badr 300 believers faced 1,000, and at Ahzab 3,000 believers faced 10,000. The only battle where there were more believers than the enemy was at Hunayn where ironically the believers were almost defeated as they felt overconfident because of their numbers. They nearly suffered defeat because of this illness in the hearts that they were better than their opponent. No. It’s never about the quantity; the factor that determines victory is the inner quality of the men.  Although we are to prepare as much as possible for battle, and do not just sit back and wait for victory to descend, the outcome depends on the quality of imaan.

Another parallel between that battle and today is the presence of two camps, or in fact three: the believer’s camp, the disbeliever’s camp and the in-betweener’s al munafiqoon (hypocrites’) camp. And this is why Allah Almighty stated that they were ‘shaken with a severe shaking’ as tribulations made the quality of their belief evident, separating the true levels and stripping away veneers.

Trials and tribulations reveal quality. In today’s world we see pretenders, who appear to support the oppressed ones, the truth, the deen and human rights. But when it comes to the test as happened in the seerah, it becomes evident who the real believers are and who are the pretenders.

Without this test it would not be easy to distinguish the true believer from the fake believer. These tests and tribulations in the ummah are therefore filtering the quality, not the quantity of the believers. The beautiful verse ends with ‘minal mumimeena rijalu sadiqu’ – Allah Almighty will reward the believers, the truthful ones for supporting the truth, and staying firm in faith.

Those who are pretending will fail the test. Fickle in their support for the oppressed, swinging to support the oppressors when it is expedient is hypocrisy (nifaq).

Choosing a side and sticking to it

There is no such thing as siding with the enemy as a strategy to uphold the truth. You either support belief or you support disbelief. Being in-between is a state of hypocrisy, and this is not what Allah Almighty is pleased with.

Despite the bitterness of the tests which we are facing as an ummah, there are fruits. We can see the real believers, and supporters of the truth who do not change their support: ‘Wa ma tabdalu tabdeela’ And those who are self-interested.

‘I will be at the cistern, waiting for those of you who will come to me. Some men will be prevented from reaching me, so I will say: ‘O Lord, my ummah, my ummah!’ but it will be said to me: ‘You do not know what they did after you were gone; they kept turning on their heels.’ (Ahmad)

Let’s promise to stay steadfast until the last day of our life and support the truth no matter what it takes. This is the covenant we made with Allah Almighty, and let’s fulfil it to the best of our ability. The Prophet (peace be on him) made the du’a (ya muqalibal qaloobi thabit qalbi ala deenika) O Allah give us firmness in faith. Ameen