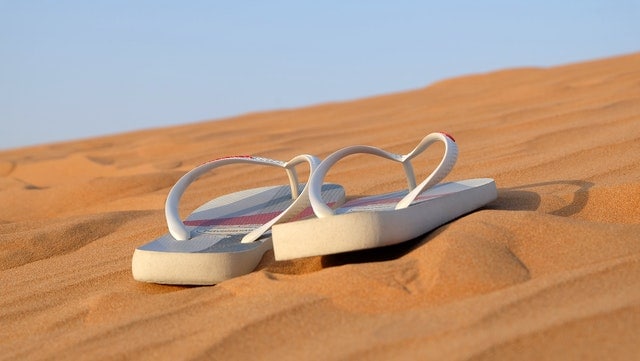 Are feet considered to be part of a woman’s awrah? Are women permitted to wear sandals?

There are two opinions on this. The Maliki and Shafi schools of thought consider it is necessary for a woman to cover her feet. Some say the top part, but not the bottom part, are part of a woman’s awrah. However among some scholars in the Hanafi school women’s feet are not part of a woman’s awrah (the area that needs to be covered in front of non-mahrams).

Under the concept of ease, it is very difficult for a woman to cover her feet, and she might even trip over her clothes trying to keep her feet covered. It is better to make life easy for them, especially if they are working in fields etc. Therefore the feet upto the ankles are not part of their awrah.

Some schools dispute this and say that they should cover feet as a norm, but this would impose hardship on them. We cannot abolish this position, but I recommend the Hanafi position to people, as it makes life easy and is in line with the concept of ease in the shariah.

Should a woman’s feet be covered during salah?

As above there are two opinions whether a woman’s feet are her awrah. If you take the Hanafi position that feet are not awrah, they may be uncovered during salah.

The awrah is the area of the body which must be kept private and covered. It is unlawful and sinful to expose this area to someone who is not permitted to see it.

O children of Adam, We have bestowed upon you clothing to conceal your private parts and as adornment. But the clothing of righteousness – that is best. That is from the signs of Allah that perhaps they will remember. (7:26)

What parts of the body are awrah?

A man’s awrah is from his navel to his knees. This area must be covered in front of other men and in front of women and during prayer.

A woman’s awrah depends on the situation:

During prayer, she must be covered from her head to her ankles, excluding her face, hands (and her feet in the Hanafi school).

Among other women a woman’s awrah is from her navel to her knees. This means she can wear a sari, crop top, choli, but not expose her belly button, bottom, thighs down to her knees. Therefore a conventional swimsuit which leaves her thighs exposed, would not be acceptable, nor a bikini.

In front of a male mahram there are differences of opinions in the four Schools of Thought. Some say a woman needs to cover her stomach, back and the area between her navel to her knees. The Malikis include the chest as well. The Hanafis don’t include the chest if it does not evoke temptation (fitnah) and desire (shahwah).

In front of non-mahram men, the entire body of the woman is her awrah, except her face and hands (and feet in the Hanafi school).

A woman’s mahram is a man to whom she is related by blood or cannot marry:

Can you visit an osteopath, masseuse or hammam?

In general your awrah must be covered, unless there is a valid reason for it to examined or treated – such as a medical purpose.

If one is having a massage, one can have a towel over one’s awrah and if the thighs are being massaged this can be done through a towel.

One should not go to a place where there is nudity such as a hammam where people are in a state of undress, as there are many warnings in the fiqh books about revealing the awrah in a hammam and how to avoid that.

It is not permitted to uncover one’s awrah for hair-removal such as waxing or laser treatment.

What beauty treatments are permitted in Islam?

What is Islamic dress?

Do women have to cover their feet?

Is the hijab obligatory?

What beauty treatments are permissible in Islam?