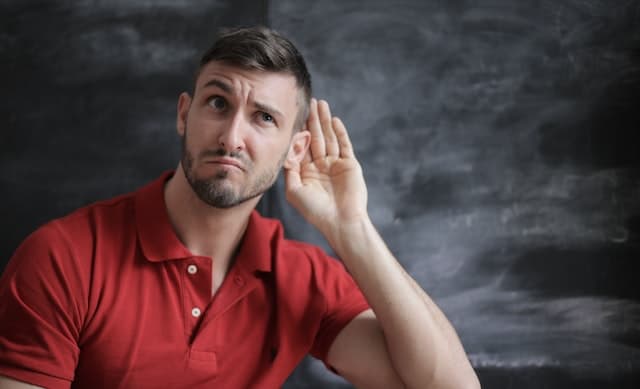 Anas Ibn ‘Abbas (may Allah be pleased with him) said that the Prophet (peace be upon him) said:

‘He who seeks to listen to the talk of a people (secretly) will have molten lead poured into his ears on the Day of Resurrection’. [Bukhari]

The Prophet (peace be upon him) was establishing a new community in Madinah and reforming their practices and so his advice ranged from anything and everything whether it was what to eat, how to get married, financial transactions, or improving one’s relationship with Allah, he set the boundaries and showed the best practice for every aspect of life.

The hadith addresses the everyday issue of conversations between people. What is allowed and what is not allowed? In this hadith we are taught that when two or more people do not want their conversation to be overheard, it is punishable to deliberately eavesdrop.

Islam regards privacy as important and the Shariah incorporates this in Islamic law to an extent which is does not exist in other laws around the world.

The Prophet (peace be upon him) is saying that if you see people engaged in a private conversation one is not allowed to sneak up on them or put one’s ear to the door to catch what they are saying. It is haram.

The punishment is that molten lead will be poured into their ears on the Day of Judgment is a very painful punishment because they are breaking the rules of privacy.

What if the conversation is talking place in a public space? Does that mean others can listen in? If some people physically move to be alone, for instance they go into the corner of the room, it obvious from their action they do not want anyone to hear their conversation. To go and sit by them is an invasion of their privacy and space.

If anyone listens to other people’s talk when they try to avoid him, lead will be poured into his ears on the Day of Resurrection. [Abu Dawoud]

Therefore whether it is in the workplace or the mosque or public area, if someone has demonstrated that they are speaking privately, others are not justified to listen to their conversation.

They may be discussing something personal and they do not want others to barge in and sit down next to them, this is rude and unacceptable.

Of course, if one is listening to a conversation that is not private and those chatting do not mind their listening, it is not haram. For instance, two scholars may be discussing science or the Quran and hadith, so listening to them and benefiting from their discussion is fine – as it’s not private, it’s not a secret and they do not mind or even approve of your listening, though they happen to be talking together.

Phone-tapping, hacking into someone’s account and spying are haram

In the old days, when people used landlines, they often had two or three phones in the same house, so it was possible to pick up a third handset and listen in to the conversation that was going on. This is haram and hacking into someone’s system and listening is haram.

Today, we can use a plethora of new technologies to spy on others and record their conversations without their knowing or their consent. With a few exceptions, this is haram.

Similarly going through someone’s private papers and documents, reading their letters or diary, going through their phone and checking their chats without their consent is haram.

The exceptions to this are spying on the enemy. This is to do with security and is not on an individual basis but at national and international level. Governments have a special department for this.

If you are on a WhatsApp group chat or any other virtual platform on social media, there may be a discussion, sharing of ideas, debates and arguments or shared documents with the expectation that these are not divulged to other people or groups. If the policy of that group is that you are not permitted to share any comments or conversations without prior consent then you have to abide to the regulations and the rules of the group. You cannot cut and paste, screenshot or forward messages to another group. Someone may say something in that group because there is a specific context, or because they trust those people, forwarding their messages may mean that their opinion is taken out of context or misunderstood and distorted. Therefore it would be haram to share their messages without their consent.

When you are in someone’s home, and especially if you are spending the night and have been given a room, don’t rifle through their drawers and poke your nose in their cupboards. These are their private things. Lower your gaze and do not go through their things. It is an amanah (trust), so don’t breach their trust. Imagine if they opened the door and found you searching through their things and trying to open locked cabinets.

Taking out the eye of the one who peeps

What is private, must remain private. Apart from listening, it is also haram to look at someone when they are in a private space – in other words peeking at them without their knowing and invading their privacy.

It is mentioned in other hadith that looking at people without their knowledge is not just haram but they would be justified to attack the one who is spying on them.  This shows the extent to which such an act is disliked.

Anas ibn Malik reported that a Bedouin came to the house of the Messenger of Allah (peace be upon him), and put his eye to the crack of the door. Therefore the Prophet took an arrow or a sharp stick and aimed it at the Bedouin as to gouge out his eye. The man left and the Prophet said, “If you had stayed, I would have gouged out your eye.” [Nasa’i]

This shows how highly our Sharia regards privacy and its zero tolerance towards invading someone’s private space.

The Paparazzi and gossip magazines

Some might say it is severe to knock out the eye of a peeping Tom, however those who spy need to appreciate the consequences of their action. The paparazzi go to extreme lengths to get shots of celebrities when they are away from the press. They hire helicopters, zoom in from hidden positions and then plaster those images all over the media. This is haram. If they knew that they could have their eyes knocked out for doing this, they would hesitate and think 100 times before doing this. Yet they know no one can touch them and that there is significant profit to be made by capturing those private shots or private events.

This is why the Prophet (peace be upon him) educated us that this is severely punishable. Do not read gossip magazines or watch gossip programmes because they are snooping and prying into people’s private lives and their mistakes. It is exposing people which is haram.

A private conversation is an Amanah – a trust. To leak discussions is haram. Personally, I have experienced this. There have been times when shuyukh have gathered to discuss sensitive topics which were not meant for the public domain or were in the initial stages of launching. Yet, though these were held privately or in the preparation of an event, the discussions would appear in the news. The whole project would be destroyed because of these leaks.

Therefore we need to educate ourselves and our children, our community; where to draw the line.  Cleaners and maids have access to people’s private spaces, particularly when left alone, they should be very careful not to open drawers and cupboards and take advantage of their position. Other workers such as electricians, plumbers, carpenters, builders, doctors etc are entrusted with people’s private matters must be very careful not to breach confidentiality.

We have to have common sense based on the Sunnah of the Prophet (peace be upon him) so we can protect our privacy and the privacy of others. Just as we want others to respect our privacy, we should not expose theirs.

If one is asked in court to divulge certain information, one has to reveal this. It depends on the details of course.  The other exception is that you are allowed to spy on your enemy and use technology to know what they are planning or plotting against you. This is necessary as part of the protection of your country and your people.

Jabir ibn Abdullah (may Allah be pleased with him) narrated that the Prophet (ﷺ) said:

Meetings are confidential except three: those for the purpose of shedding blood unlawfully, or committing fornication, or acquiring property unjustly. [Abu Dawoud]

The etiquettes of being a good guest