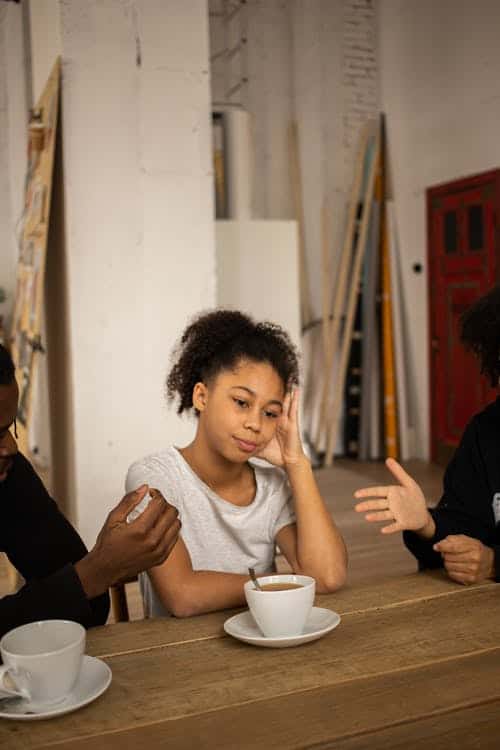 Kindness and patience is paramount. Children respond to the tone of your voice. Your tone makes or breaks your communication. A harsh tone pushes the red button. It triggers a barrage of resentment. When a child hears a nagging tone, it makes them rebel and resist what you are asking them to do.

If your voice is angry and you say ‘I told you don’t do this!’ ‘Don’t wear this!’ ‘How many times have I said this?!’ it is like a hammer banging relentlessly on their head. Bang! Bang! Bang! They hate this tone. It shuts them down.

My advice is change your tone. Use a loving tone when you ask them to do something, a tone which lands softly on their heart. You could say in a nice voice, ‘Darling please could you do this…’ Find the tone that suits them. This will improve your communication.

There is a story in Musnad Imam Ahmed of two friends, one was a devout worshipper and one was sinner. The worshipper kept reprimanding the sinner, but the end result backfired on him. One day they got fed up with each other and the sinner told the worshipper to leave him alone. The worshipper scolded the sinner saying, ‘By Allah, Allah will never forgive you’. They both died and Allah Almighty resurrected them and demanded who appointed himself as judge on Allah’s behalf? He summoned them both and then rebuked the worshipper for acting as if he had Allah’s knowledge and sent him to hell. And then He forgave the sinner. That statement ruined all his deeds. When he said ‘Allah will never forgive you’ he was arrogant and he put himself in Allah’s position. No one can ever be in that position so Allah will throw him in hell to be punished, (not forever), for putting himself in that position. Unfortunately we have that in our midst – people telling others off harshly.

Abu Hurayrah reported God’s Messenger (peace be on him) as saying:

“There were two men among the Bani Israil who loved one another, ‘one of whom engaged ardently in worship while the other called himself a sinner. The former began to say, “Refrain from what you are doing,” and the other would reply, “Let me alone with my Lord.” One day he found him committing a sin which he considered serious and said, “Refrain;” to which he replied, “Let me alone with my Lord. Were you sent to watch over me?” He then said, “I swear by God that God will never pardon you, nor will He bring you into paradise.” God then sent to them an angel who took their spirits, and they came together into His presence. To the sinner He said, “Enter paradise by my mercy;” and to the other He said, “Can you forbid my mercy to my servant?” He replied, “No, my Lord.” Then He said, “Take him away to hell.”   (Ahmad)

We need to deliver guidance with love and gentleness otherwise it can backfire on us in dunya and akhirah.