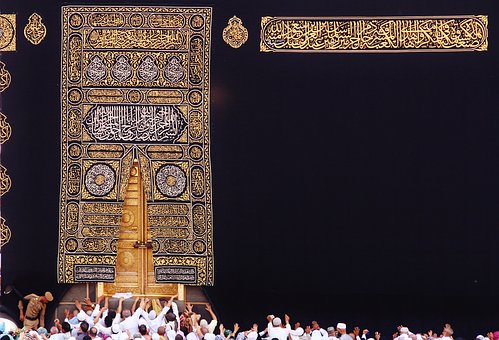 When changing direction helps you find your true direction 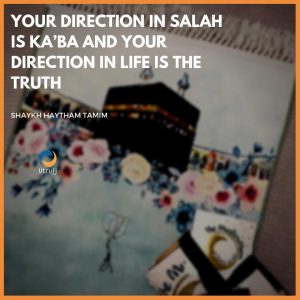 And thus we have made you a just community (ummah wasata) that you will be witnesses over the people and the Messenger will be a witness over you. And We did not make the qibla which you used to face except that We might make evident who would follow the Messenger from who would turn back on his heels. And indeed, it is difficult except for those whom Allah has guided. And never would Allah have caused you to lose your faith. Indeed Allah is, to the people, Kind and Merciful. (2:143)

The weight of the moderate ummah

Muslims are described as the ummah wasata – the moderate, just and balanced ummah. The ummah of the middle path, between two extremes.

Whenever we tamper with this balance, we face problems. Our deen is balanced between the soul and body, intellect and emotion, miserliness and extravagance, capitalism and socialism. We respect the individual as well the community, we strive for dunya, as well as akhirah, not one exclusively at the expense of the other.

The term ‘moderate Muslim’ is now commonly used to wrongly suggest a Muslim who is flexible in his practice of Islam, who drinks, or does not pray, or has a girlfriend. This is a corrupt meaning of moderate.

Being the ummah that carries the divine message is a high level of honour and responsibility. The ummah wasata has to be the ummah of justice – not selective justice, but justice for all.

The Prophet (peace be on him) will be a witness to his ummah, that they received the truth (at the most basic level of bearing witness), which is the bayyinah (evidence).  Just as he clarified the message for us, and conveyed its true meaning, we have an obligation to pass it on as it was revealed. Unchanged. To our next generations and to those around us. Thus the characteristic of the ummah is that they pass on the message without corrupting it.

As mentioned in Tirmidhi, Allah’s Messenger (peace be on him) said:

Noah and his nation will come (on the Day of Resurrection and Allah will ask (Noah), ‘Did you convey (the Message)?’

Then Allah will ask Noah’s nation, ‘Did Noah convey My Message to you?’

They will reply, ‘No, no prophet came to us.’

Then Allah will ask Noah, ‘Who will stand a witness for you?’

He will reply, ‘Muhammad and his followers (will stand witness for me).

‘So, I and my followers will stand as witnesses for him (that he conveyed Allah’s Message).

That is, (the interpretation) of the Statement of Allah: ‘Thus we have made you a just and the best nation that you might be witnesses Over mankind .’ (2.143)

As the shining face of revelation, we have to improve our connectivity to the message and be clear in our identity.

‘And the people of Nuh – when they denied the messengers, We drowned them, and We made them for mankind a sign. And We have prepared for the wrongdoers a painful punishment.’ (25:37)

How to be in the ummah wasata

To belong to the group who will testify that they received the message and carried it, we have to follow what has been revealed. Our slogan needs to be ‘we hear and we obey’ putting what Allah Almighty says above our own opinion and the opinions of society. This is where the test comes.

Being the ummah comes with facing conflicts and challenges in the community. Just as the early believers were mocked when they prayed in the direction of Jerusalem one day but then abruptly switched to Makkah.  This sparked a crisis of faith among the weaker believers. Dilemma and doubt in their minds, they waivered.

The Qur’an made it clear that this move was a test to see who was firm in their faith and who is not. The ummah was being asked to prove their faith not just by words, but actions through following Allah Almighty’s commands when those about them ridiculed them for it. It was a tough challenge but it revealed the exact qualities of those who were following the truth and those who were not. There is an Arab saying that ‘the camel can climb the tree’ meaning that anyone can make a claim, but only when they prove it can they be believed. Thus anyone can say they are a believer but it is only when they carry out their religious obligations that they fulfil the conditions.

The direction of qibla was not trivial as it is as a point of unity and identity. Sanctified by Allah Almighty, the Kaaba was the first house of worship to be built, and was purified by Ibrahim (peace be on him), endowed with special blessings by Allah, and brings multiple rewards for those who pray there.

In every community we have people who specialise in creating rumours and spreading fake news. When one rumour is disproved, a new one starts. Thus once the ayah revealed that the change in qibla was not a whim of the Prophet (peace be on him) but a command of Allah Almighty, a new rumour started that the prayers of those who had prayed towards Bait al Maqdis and passed away would not be accepted. The companions of the Prophet (peace be on him) came to him with this new doubt, which was answered after the rest of the revelation:

‘And never would Allah have caused you to lose your faith’.

Here the word ‘faith’ (imaan) refers to salah. Allah Almighty clarifies that the salah of those who prayed towards Bait al Maqdis and passed away were not wasted. He is the Most Merciful.

Based on the Tafseer Class of Shaykh Haytham Tamim