Why Not to Rush the Pursuit of Knowledge

Not Trying to Attain the Impossible 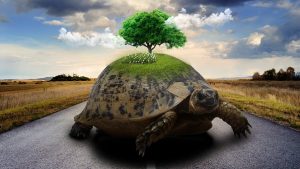 If you feel frustrated in pursuing knowledge, it is worth thinking again, as knowledge is not something we can acquire overnight.

It is a consistent approach that brings the seeds of knowledge to bloom.

One must apply gentleness and proceed in a slow and calm manner in his search for knowledge. This is since the Messenger of Allah (peace be on him) said:

‘Verily, Allah loves gentleness in every affair.’  And ‘Gentleness does not enter something except that it beautifies it.’

Seeking knowledge falls under this in the general sense.  Knowledge beautifies a person.

What does it mean to ‘apply gentleness?’ It means that one should not seek to achieve knowledge all at once, as Imam Az-Zuhree once said:

‘Whoever seeks to attain knowledge in one go, it will leave from him in one go. Rather, knowledge is to be sought with the passage of days and nights.’

Overcrowding the knowledge in the ears misguides one’s understanding. Doing a little regularly, it adds up to an immense and amazing amount. Ibn Aqil said:

‘To do a thing today and the same tomorrow,

Seeking and gathering knowledge from its sources

For gathering is the essence of knowledge

By doing this, one may achieve wisdom,

For streams is nothing more than a gathering of droplets.’

So gentleness is something that is required. But how is this gentleness to be applied? It is by not desiring to attain knowledge all at once. Whenever someone embraced Islam, the Messenger of Allah (peace be on him) would not ask that person to do everything immediately. Instead he would teach him and expect that person to start fulfilling his obligations only as much as he could bear at a time. Islam is a natural way of life, it has been revealed to make our lives easy, and the Messenger of Allah (peace be on him) said ‘Indeed, the religion is easy’. Allah Almighty states in the Qur’an.

The gradual process of change is also clearly reflected in the manner in which the Qur’an was revealed over 23 years. Allah Almighty says:

And it is a Qur’an which We have divided in to parts in order that you may recite it to men at intervals, and we have revealed it by stages. [Al-Isra:17:106]

Therefore the knowledge is gained in a gradual process, in stages and on a continuous basis. It is paramount that you observe gradualism in your approach in seeking knowledge; this means that you should perfect the foundations of knowledge before moving to the next level. It takes a person on average eleven years of studying after enrolling into secondary education in this country to be in a position to do a Phd in a particular subject, so why should it be any different in the sciences of Islam? Yet many are trying to understand Phd material in Islam whilst they are still in the foundation levels.

Therefore, enrol on your quest for knowledge, and cry out constantly to your Lord as it was commanded to the Prophet (peace be on him), ‘O’ Allah increase me in knowledge’, which will never at any given moment be complete. In all your efforts towards becoming a person of knowledge, you must bear in mind the principle of gradualism. Otherwise you will try to attain the impossible and when you do not achieve it, you may become frustrated, which will hinder your progress.

Perseverance and Persistence with Knowledge

The student of knowledge should never despair when a certain subject matter becomes inaccessible due to its difficulty, some of the subjects were impenetrable to some of the renowned scholars, and some of them openly admitted it in their biographies. Imam Ibn Taymiyyah used to say frequently in his supplication if the meaning of something was impenetrable:

And so it was, that access to that subject matter would be granted to him. Al-Khateeb Al-Baghdadi, in one of his books reported:

‘One of the students of hadith used to crave and yearn for seeking knowledge. He would visit the elder teachers and sit in their gatherings. Then when some time had passed, he saw that he had not benefited at all and that he had not attained a great deal of knowledge. He said to himself: ‘I am not fit for this knowledge’ and gave it up, since he thought that there was something wrong with his understanding or that he was not qualified for seeking knowledge.

One day, after he had left off seeking knowledge for some time, he passed by a rock that had water falling on it, drop by drop. The continuous dripping of water had affected the rock to the point that it had made a hole in it.

The man stood there for a while, contemplating and reflecting, and said:

‘This water, in spite of its softness, was able to have an effect on this rock, in spite of its hardness. And my mind and heart are not harder than this rock and neither is this knowledge any softer than the water.’ So he became determined to go back to seeking knowledge, which he did and excelled at. And he later became one of those who are referred to having persistence and knowledge.’

Sometimes you may find that when your desire to fulfil your obligation or your goal is at its greatest to acquire knowledge, you feel beset or plagued by frustration and despair in your heart due to unforeseen obstacles that come in your way, and your mind wants you to give up. What you should remember it such times is that it is the intention and the effort that matter and not just the outcome. Also you should not lose hope, for verily losing hope means shutting the door to good.

Ibn Qayyum mentioned that a person’s value is measured according to his determination and goals. A wise person once said:

‘Inform me of a man’s determination and I will tell you what kind of man he is.’

To achieve a goal requires a sustained determination. It requires will, without willing to do something you cannot do anything. Will is different from desire, desire is like dreams and aspiration that for many remains unfulfilled, but the nature of will is that it leads towards reaching the objective. As the famous proverb:

Tied with a will power is self confidence, which is borne out of total reliance on Allah, knowing that He is there to help and support you. If you are constantly holding yourself back believing you are weak and incapable and blame your incompetence and inadequacies, then you are bound to fail. A superiority complex such as arrogance prevents one from learning, and an inferiority complex is derived from a lack of confidence in Allah and in oneself.  Allah has mentioned in the Qur’an:

On no soul does Allah place a burden greater than it could bear. [Baqarah: 2:286]