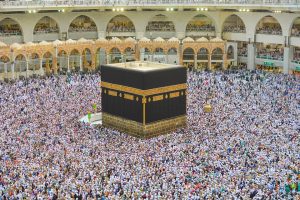 Hajj is a special journey to al-akhirah (the life Hereafter) just as salah is a journey to heavens.

When performing Hajj it is as though you are going to al-akhirah and you never know if you will return from Hajj.

You might as well not say to friends and family that you are going to Hajj, but instead inform them that you may be going to Allah Almighty. This is one of the wisdoms for seeking forgiveness before your journey in case you don’t return.

The significance of ihram

Ihram is like a white shroud. You carry no credit cards – instead you go to Allah Almighty with your deeds alone.
As soon as  your don your ihram – many things become haram, as suggested i word ihram itself, which contain ha, ra, meem – like haraam. In this garment, we enter a state in which it is forbidden to commit sins and even certain permissible things impermissible.
Similarly, in salah, to eat or drink is prohibited because you have done takbiratul ihram the forbidding takbeer which makes things prohibited. And in ihram, things that were permissible before are not allowed e.g. the use of perfume, cutting nails or hair and marital relations. Allah Almighty takes you to a different dimension where you are not controlled by your desires. He wants you to put your desires aside, as it ruins the spirit of Hajj. Likewise, it ruins siyam and salah. So we have ihram to take these desires away from you before you start your journey. This is because He wants your spirit to lead you and not your desires to lead, as you can not have both predominant in you.

Tawaf is performed anticlockwise and the whole universe rotates anticlockwise so you are becoming part of the universe. All planets, galaxies go anticlockwise. (Notice the direction that water drains down a sink). Allah Almighty wants you to move in this direction to join the tasbeeh to Him Almighty. All the galaxies are also doing this. In heaven, angels are also doing tawaf above you. 70,000 angels enter al-Bait ul Mamur daily. Angels, galaxies all do tawaf – blending all together – celebrating the name of Allah Almighty, His Majesty and Beauty.

The prophet (peace be upon him) mentioned what he saw in his Mi’raaj to the heavens:

Then the Bait-ul-Ma’mur was raised up to me. I said: O Gabriel! what is this? He replied: It is the Bait-ul-Ma’mur. Seventy thousand angels prays in it daily and, after they come out, they never return again. Narrated by Bukhari and Muslim.

As-Sa’ee
When doing Sa’ee remember Hajar (may Allah be pleased with her) and the her Yaqeen full trust she had in Allah Almighty. You see the faith (imaan) and full trust (tawakkul). Hajar, on her own and in her very fragile condition as a nursing mother, was left alone. At his point of leaving them, she asked Ibrahim (peace be on him) ‘Why are you leaving us? Did the Almighty ask you to do so?’ Ibrahim (peace on him) replied, ‘Yes’ to which Hajar responded ‘Then He will look after us’.
The lessons for us in Hajar’s story are:
1. Her full trust in Allah Almighty. You expect fragile people to break but she was very tough and strong in her imaan.
2. She was doing her best to seek help and deal with the means around her between Safa and Marwah and not just sitting around. Although we do rely on Him Almighty, dealing with the means is something else. They compliment each other: We must deal with the means but also have full trust in Allah Almighty.
When running between Safa and Marwah it is as if you are running to Allah Almighty from any sins and mistakes and to please Allah Almighty. Symbolically, his is the state we should be in everday.