Lessons from the Seerah 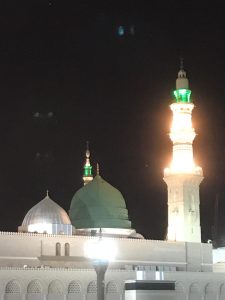 The benefits of reciting darood

When travelling to Madinah, as the Prophet (peace be on him) did, we do not experience hardship as he did, but we can utilise that time for dhikr.  One of the best types of dhikr is to say salaam upon him. Ubayy bin Ka’b (may Allah be pleased with him) reported:

So never underestimate the power of saying ‘salallahu alayhi wasalam’. By reading it with full understanding, concentration and dedication all your concerns will be looked after inshallah.

Abu Huraira (may Allah be pleased with him) narrated that Allah’s Messenger (peace be on him) said:

A’isha (Allah be pleased with her) reported, ‘When we came to Madinah, and it was an unhealthy, uncongenial place, Abu Bakr fell sick and Bilal also fell sick; and when Allah’s Messenger (peace be on him) saw the illness of his companions, he said:

O Allah, make Medina as congenial to us as you made Mecca congenial or more than that; make it conducive to health, and blesses in its sa’ and in its mud, and transfer its fever to al-juhfa’. (Muslim)

The hostility in Makkah

We only understand the special position of this small town and its people by studying its background and the changes the Prophet’s (peace be on him) mission created on migrating to Madinah.

The Prophet (peace be on him) was born in Makkah and continued living in it for 13 years after the revelation began till he was 53. Every year the Prophet (peace be on him) would look forward to the month of Dhul Hijjah because that was when all the Hajjis and delegations would come to Makkah and he would be longing for some of the delegations to listen to him and accept the divine message. All the Quraysh at that time were slandering and backbiting him, deterring people from listening to him and preventing him from spreading the truth. This deeply hurt the Prophet (peace be on him). He remained undeterred even though not many people had accepted Islam at that time.  At most, only around 100 had.

The humiliation at Taif

The Prophet (peace be on him) was inspired to explore other areas for the spread of his message and took his support from the Revelation. However, he was stoned and insulted by groups from Taif. Yet, even though he was humiliated by the people, the angel of the mountains came to him with Jibril (may Allah be pleased with him) with an offer to punish the people.  The Prophet (peace be on him) did not seek revenge and instead made dua that the people from the offspring of Taif come to Islam and in the end they did.
For approximately 3 years the Prophet (peace be on him) and the companions (may Allah be pleased with them) were under siege with nothing to eat except leaves and even these they had to share amongst themselves as there were limited leaves in the desert. The insides of their mouths were bleeding from the leaves. For three years they were not allowed to buy or sell from anyone. They only had extremely limited help from some people.
In 11 Hijri after the boycott has finished some people came from Madinah, which was called Yathrib at that time. They had a particular fever associated with their town.
During the Hajj season they came and the Prophet (peace be on him) introduced himself and the Message and very quickly they became Muslim. At that time there were 5 tribes in Yathrib: three Jewish (Bani Qaunuqa’, Bani Nadeer and Bani Quraydha) and two tribes were Arab known as the Aws and the Khazraj. Historically, the Jewish tribes had no place or roots in Yathrib but they knew from their scripture that a prophet was to come to Yathrib and so that is why they settled there and they were talking about the final messenger a lot to the Arab tribes in Madinah.
When the delegation from Madinah came to Makkah and recognised the signs of the Prophet (peace be on him) which they used to hear from the Jewish some immediately 6 of them became Muslim. The following year they made a treaty known as the ‘Bay’at Al-Aqabah’ 12 people accepted Islam. The Prophet (peace be upon him sent Mus’ab bin Umair as the first teacher to Madinah. The following year 73 men and two women made Bay’ah to the prophet peace be upon him, after three months Muslims then started being sent to Madinah.

In the Prophet’s (peace be on him) mind it never occurred to him that a small city like Yathrib (Madinah) would make a big difference. He was focusing on big cities and important people, he never thought that anything would come from Yathrib.

This shows that it is not your plan but Allah Almighty’s plan. Even though Prophet (peace be on him) loved Makkah, he left and went to Madinah. Whenever you need relief, try your best and be sincere in your dua to Allah Almighty, and He will make an opening for you.

Whenever something bad happens, that you don’t like, you should rely on Allah Almighty and have full trust in Him. Don’t look at it difficulties from a negative angle, but always from a positive angle instead. Try it and turn it into something good and it will be alright inshallah.

Virtues of visiting the Prophetic mosque

Abu Huraira narrated that the Prophet (peace be on him) said:

Do not set out on a journey except for three Mosques i.e. Al-Masjid-AI-Haram, the Mosque of Allah’s Messenger (peace be on him), and the Mosque of Al-Aqsa, (Mosque of Jerusalem). (Bukhari)

Ibn ‘Umar (Allah be pleased with them) reported that Allah’s Apostle (peace be on him) said:

Prayer in this mosque of mine is better than a thousand prayers (observed in other mosque.) Besides it, except that of Masjid al-Haram. (Muslim)

Abdullah bin Zaid Al-Mazini narrated that Allah’s Messenger (peace be on him) said:

Between my house and the pulpit there is a garden of the gardens of Paradise. (Bukhari)