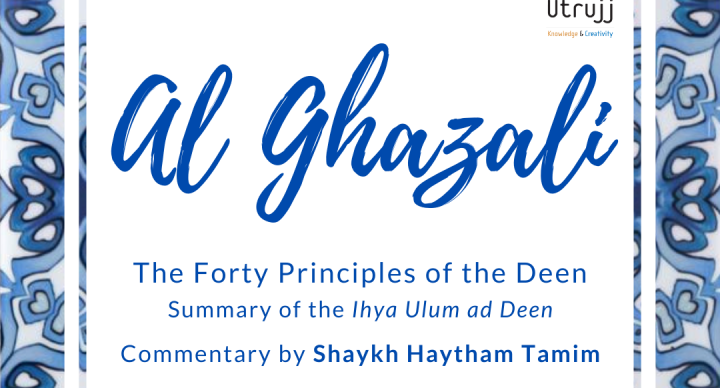 The Forty Principles of Religion

A modern take on the well-known classic

Every Thursday at 7pm – 8pm

Don’t worry. You can watch all the recordings on YouTube in your own time.

How do I join?

Explore the spiritual depth of virtually every aspect of Islam with profound insights into how to become closer to Allah Almighty.

Though Ghazali’s contribution to Islamic spirituality is hard to surpass, it is accessible through his step by step breakdown of the spiritual path, which is tried and tested.

Studying the Forty Principles enables students to grasp the fundamentals without having to grapple with the magnus opus which is the Ihya Ulum al Din.

Watch the Sessions you missed

Who was Al Ghazali?

Known as the Proof of Islam, Abu Hamid Muhammad at Tusi al Ghazali (d.505 AH/111 AC) is regarded as one of the greatest thinkers to have lived after the Pious Predecessors. The Persian philosopher rejected Aristotelian philosophy and the Ihya became the most frequently recited Islamic text after the Qur’an and the hadith.

He combined orthodox Sunni theology and Sufi mysticism in a comprehensive guide to every aspect of Muslim life and death. Imam Nawawi stated that: “Were the books of Islam all to be lost, excepting only the Ihya‘, it would suffice to replace them all.”